Oppo recently revealed its plan for global rollout of ColorOS 12. 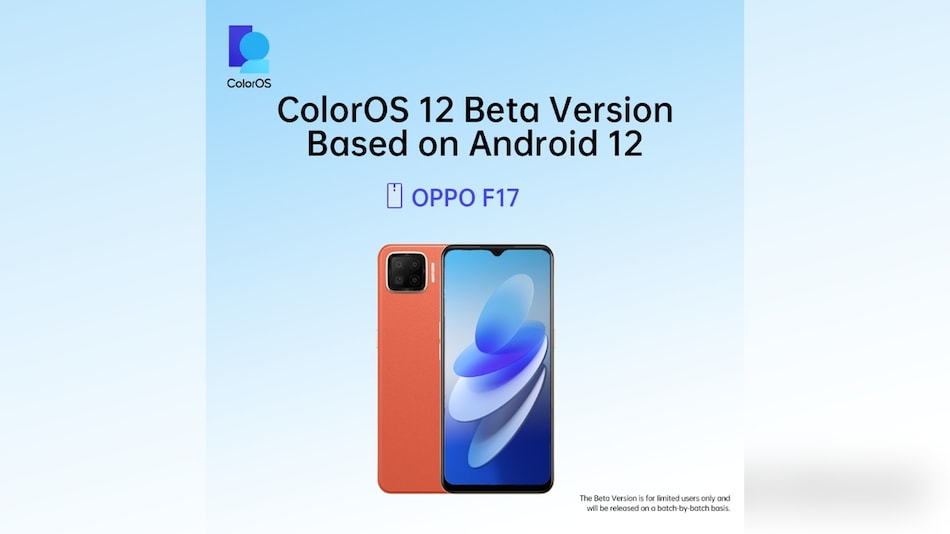 Oppo F17 and Oppo A73 have started getting the ColorOS12 beta update, which is based on Android 12. As per the company, the Oppo F17 models in India and Oppo A73 phones in Vietnam are getting the beta version update. The news comes a few days after Oppo announced the global roll out schedule of ColoOS 12 beta version as well as stable version for the second quarter. As per Oppo, a chunk of the Oppo F19 smartphone users in India have already got the ColorOS 12 beta version.

Oppo's ColorOS global Twitter handle has shared an image, and said that the ColorOS 12 beta update is coming now to the Oppo F17 in India, and Oppo A73 in Vietnam. It says that the beta version is for limited users only and it will be released on a batch-by-batch basis. If you want to be one of the users to get the update, you can apply by going to Settings > About phone > Software Update > Tap Settings Icon > Apply for Beta version > Update Beta version. If the application quota is full, users will have to wait for the next round of rollout.

As mentioned, the company has already started rolling out the beta update for Oppo F19 smartphone users.

The Chinese company recently announced its plan to globally roll out beta and official Android 12-based ColorOS 12 updates for the second quarter of 2022. Apart from the Oppo 19 and Oppo F19s, and Oppo F17, smartphones including Oppo A53 as well as Oppo Reno 3 Pro will get the beta update in April. Oppo Reno 7 5G, Oppo Reno 10X Zoom, and Oppo A76 will start getting the beta version in May, and the Oppo F21 Pro 5G will get beta update in June. Oppo says that Oppo A53s 5G will start getting the stable update from April 25, and the Oppo Reno 7 Pro 5G will get the official version in May.