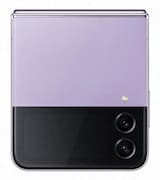 Samsung's Galaxy Z Flip 3 was somewhat of a novelty even though it was a big improvement over the original Z Flip. Samsung managed to make it water resistant, added a bigger cover display, and squeezed in top-tier performance. However, it was far from a usable smartphone, mainly because its battery life was quite weak and that cover display was only good enough for viewing notifications and nothing more.

Samsung Galaxy Z Flip 4 is a premium smartphone that now not only caters to the fashion forward but also to the general user who is looking for something unique and special in Android smartphones.

Its design gets minor improvements compared to the previous model, but thanks to a smaller hinge it can now accommodate a bigger battery, which along with the new processor has drastically improved its battery life.

The displays appear to be the same as before with no differences in size. The cover display offers no additional functionality and still offers a rather restrictive experience forcing the user to open up the main display.

Photo quality has improved even though the camera setup appears the same on paper. The same can also be said about the low-light video quality which was a problem on the earlier model.