It’s finally ready to be your daily driver 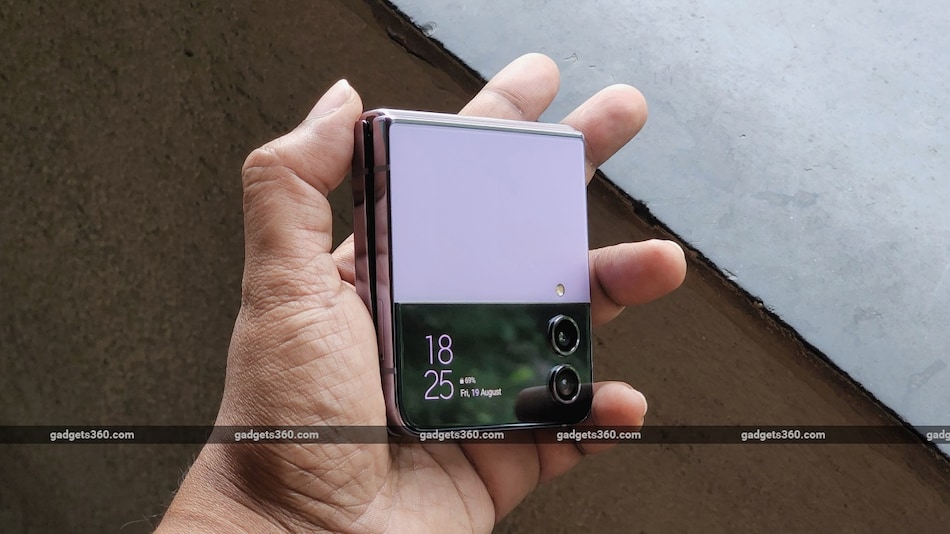 Samsung's Galaxy Z Flip 3 was somewhat of a novelty even though it was a big improvement over the original Z Flip. Samsung managed to make it water resistant, added a bigger cover display, and squeezed in top-tier performance. However, it was far from a usable smartphone, mainly because its battery life was quite weak and that cover display was only good enough for viewing notifications and nothing more.

With the new Galaxy Z Flip 4, Samsung has not significantly overhauled the design. Most of the changes are internal – the battery's capacity has increased and so has the charging speed. The design of the hinge has changed, though. After using this phone for a week, I can conclude that it not only looks good but is also practical enough to use every day. Here's why.

Samsung has made minor refinements to the Galaxy Z Flip 4's design. The differences are quite minor, and it takes a trained eye to spot most of them. The metal frame of the smartphone is now less rounded with flatter sides and more defined edges. The frame is now polished instead of matte, which makes this phone less slippery than the Z Flip 3. The glass panels now have a soft matte finish which does a good job of resisting fingerprints.

While the Galaxy Z Flip 4 seems just as thick as its predecessor when folded or open, the metal frame of the rear panels around the hinge has grown noticeably thinner, giving it a more refined appearance. The size of the cover display remains the same as before and so does the glass covering it. The cameras appear a bit raised from the surface, which does not let the phone rest flat on a table.

The hinge seems to have been improved in the sense that it reportedly takes up less space inside the smartphone, which let Samsung's engineers squeeze in a bigger battery. The hinge also seems a bit more rigid, which is a good thing when it comes to gaming as the old Flip 3 often folded inwards when a little pressure was applied towards the centre of the main display. This also means that it's a little more difficult to open this phone with one hand. It's no longer possible at all to flip the top half up with just a thumb, but even previous models were never really meant to do that.

The internal display's bezels remain the same as before but the groove around the hinge area definitely felt less shallow than on the Z Flip 3.

As much as Samsung has tastefully refined the design of the Galaxy Z Flip 4, the phone is still vulnerable to dust (the IPX8 rating indicates only water resistance), which is still a problem for both foldable models this year. The inner display is still quite delicate and needs the pre-applied screen protector to help prevent damage from nails and sharp objects.

The Samsung Galaxy Z Flip 4 along with Galaxy Z Fold 4, unlike the S22 series launched earlier this year, get the latest Qualcomm Snapdragon 8+ Gen 1 SoC which offers slightly better performance along with improved efficiency compared to the Snapdragon 8 Gen 1 SoC. There's no S Pen stylus support like on the Z Fold 4, and no support for Samsung Dex either. The battery has now grown bigger from the previous 3,300mAh to a much better 3,700mAh and it also charges faster at 25W instead of the previous 18W.

The phone runs Samsung's One UI version 4.1.1 which is based on Android 12. There aren't any big changes here compared to what is already available on Samsung's other premium smartphones. The optimisations that arrived with the Flip 3 are still available, including the ability to open up to five apps in floating windows. However, this seems pointless given the tall aspect ratio of the display that really only lets you work with one floating window (and one app running in the background) at a time. The taller screen aspect ratio works better with the split-screen implementation if you need to multitask. Samsung has introduced Flex mode, which basically lets an app (native or third-party) place its content on the top half of the display while the bottom half can be used as a touchpad or to show controls, among other things. This wasn't always useful on the Flip 4, since you're left with a smaller, squarish screen area.

While the cover display's size remains the same, Samsung has added the ability to dictate responses to messages by tapping on the mic button that shows up before the template responses. However, this only works with messaging apps such as Slack, Messenger, WhatsApp, etc. but not for emails. In other ways, the cover screen is still quite limited, and very different from Motorola's cover screen implementation on the Razr 5G. I did try a third-party app called CoverScreen OS that's available on the Play Store, which let me run apps and games on the cover screen, and even includes an app drawer. However, the 1.9-inch display size still feels quite restrictive in regular use, dampening the experience. Hopefully, the next Z Flip model will have a bigger and more workable external display, and software that doesn't force you to open the Flip to complete tasks on the main display.

The Samsung Galaxy Z Flip 4's 6.7-inch Foldable Dynamic AMOLED 2X primary display seems to be similar to the one used on the Z Flip 3. It has a 120Hz refresh rate, which is the same as before, but showcased much better touch sensitivity when playing FPS games such as Call of Duty: Mobile. This display worked perfectly well indoors and also appeared legible outdoors in bright sunlight although it is highly reflective, which might interfere with what you're doing. The display also supports HDR10+ which worked as expected while viewing supported content on Netflix and Amazon Prime Video.

Benchmarks did not disappoint. The phone managed scores of 1,286 and 4,076 in Geekbench's single-core and multi-core tests respectively, along with 9,21,680 in AnTuTu. The software experience was quite smooth and surprisingly fluid. The phone did not warm up much when playing games (at high settings) or while watching movies. It did get warm while recording videos outdoors, but not as much as the Galaxy S22, Galaxy S22+ and Note 22 Ultra which run quite hot when using the camera app or when under load. Most of this can be attributed to the new processor which is supposed to run cooler and more efficiently.

Battery life was quite impressive for the fashion-forward smartphone that Samsung markets the Z Flip 4 as. The bigger battery and more power-efficient SoC meant that I didn't need to switch the battery performance profile to Light mode with regular use. This phone often lasted me a whole day including about an hour of gaming. With regular non-gaming use, the phone lasted me a little over a day, which makes it far more usable than the Flip 3, which barely lasted a day even with light usage. Using the Light performance profile definitely increases the battery life by a few hours and this does not hamper performance by much which is a good thing. Charging the phone fully using a third-party 61W USB PD charger took about 1 hour and 55 minutes, which is relatively slow compared to Samsung's flagships but still quick enough for most people.

Another aspect of the Galaxy Z Flip 4 that hasn't changed much is its cameras. Samsung appears to have retained the same camera setup as before, with two 12-megapixel sensors for the primary and ultra-wide-angle cameras on the back and a 10-megapixel camera embedded into the inner display for selfies. There is one minor change though, and it's to do with the primary camera – it now seems to have a bigger sensor with a larger pixel size (1.8µm pixels vs the 1.2µm pixels on the Z Flip 3). Samsung has also retained its OIS.

The primary camera delivered good detail in daylight. Colours were punchy and the dynamic range was quite good provided there was enough light. The ultra-wide-angle camera shot decent photos with noticeable barrel distortion and purple fringing in brighter areas, along with less detail around the edges. Thankfully, the colour tones matched those from the primary camera, so Samsung has worked on its consistency. Close-ups of humans as well as objects came out with good detail, edge detection and blur. Selfies also came out well in all types of lighting conditions, but I preferred using the primary camera for selfies as they packed in more detail and appeared sharper. The camera also captured some crisp macro photos but from a distance.

When shooting in low light with either of the three cameras, the camera app automatically activated Night mode, and this worked out really well. The primary camera shot crisp photos in street-lit scenes and showcased good detail with good dynamic range in dim lighting as well. The ultra-wide-angle camera managed good quality in street-lit scenes but could not capture much detail in dim light.

Video quality was quite good across the board with good detail and stabilisation at all shooting resolutions. I also tried HDR10+ capture (which is an option in the Labs section) and it came out well save for some stabilisation issues. Low-light video was surprisingly low on noise, with good stabilisation when shooting at 1080p or 4K at auto fps, but 4K 60fps footage appeared noisy and lacked stabilisation.

While its camera performance is quite impressive, the Samsung Galaxy Z Flip 4 does not offer much flexibility in terms of cameras compared to the Galaxy Z Fold 4 or even the Galaxy S22 and Galaxy S22+ (Review). Samsung's current flagship non-foldable phones do offer better performance across the board at lower prices, but it's good to see how Samsung has managed to narrow the camera and general performance gaps between the two series this year.

With no competition in sight (Motorola has only launched its new Razr 2022 in China), Samsung has indeed taken it easy with its foldables this year. It has put in just enough effort to change or improve the parts of the previous Flip model that fell short. Everything else pretty much remains the same.

This is not a bad thing, as the Galaxy Z Flip 3 (Review) was a drastically improved version of the original Galaxy Z Flip and was almost there in terms of being a practical everyday smartphone. With most of its issues now fixed, the Galaxy Z Flip 4 sure is a unique foldable offering, not just for fashion-forward buyers but also for the general user who is looking for something unique in the world of Android smartphones.