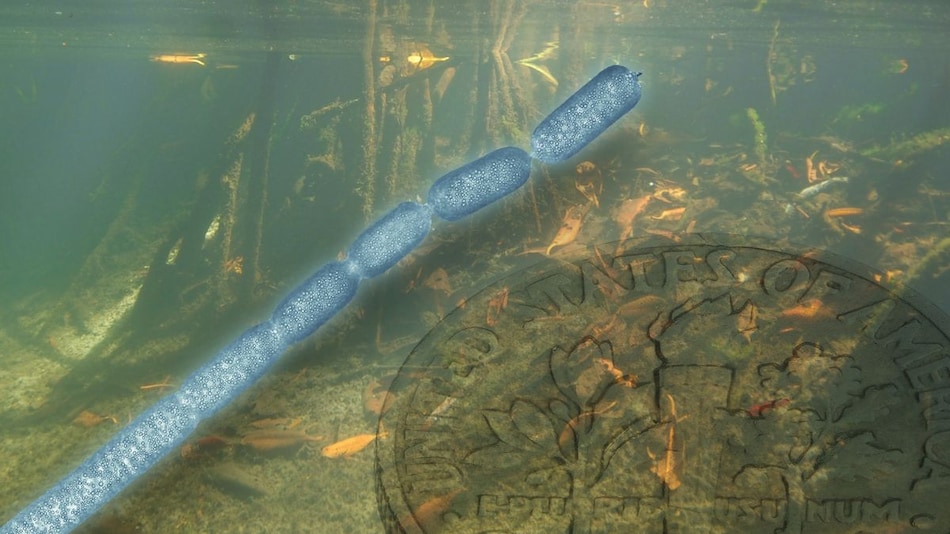 Large bacterium is 5,000 times larger than most known bacteria

In an astonishing find, scientists have discovered the largest bacterium that is 5,000 times larger than most known bacteria and is even visible to the naked eye. The organism, Thiomargarita magnifica, appears as thin white filaments measuring roughly 1 cm in length. It was discovered by Olivier Gros, a marine biology professor at the Universite des Antilles in Guadeloupe, in 2009. Gros was carrying out a research on the marine mangrove systems when he stumbled upon the unusually big bacterium in Guadeloupe, France. It was spotted on the surfaces of decaying mangrove leaves in the region.

Following the encounter, the bacterium was analysed in labs and microscopic studies were undertaken over the years to conclude that it was a sulphur-oxidising prokaryote.

“When I saw them, I thought, ‘Strange'. In the beginning, I thought it was just something curious, some white filaments that needed to be attached to something in the sediment like a leaf,” said Gros.

Silvina Gonzalez-Rizzo, an associate professor of molecular biology at the Universite des Antilles and co-first author of the new study published in Science, also performed the 16S rRNA gene sequencing to identify the organism.

In the new study, a team of researchers from the JGI and Berkeley Lab, LRC, and Université des Antilles in Guadeloupe among others, described the giant bacterium and shed light on its genomic features.

Gonzalez-Rizzo said that initially, she thought the organisms were eukaryotes as they were too big and had a lot of filaments. “We realized they were unique because it looked like a single cell. The fact that they were a ‘macro' microbe was fascinating!” Gonzalez-Rizzo added after identifying the bacteria.

According to Jean-Marie Volland, scientists and co-author of the study, while most of the bacteria have their DNA floating freely in the cytoplasm, the discovered bacterium had kept them organised. “The big surprise of the project was to realize that these genome copies that are spread throughout the whole cell are actually contained within a structure that has a membrane,” he added. It was learnt that the bacteria had three times more genes than most known bacterium.

6000mAh, FHD+, 8GB RAM, All Under 11k. Meet Galaxy F13 That Is Set to Dominate the Market
ThinkCyber, Deepview Collaborate for Futuristic Cybersecurity Training in India