The ongoing process of seasonal change on the planet may have helped create these structural patterns. 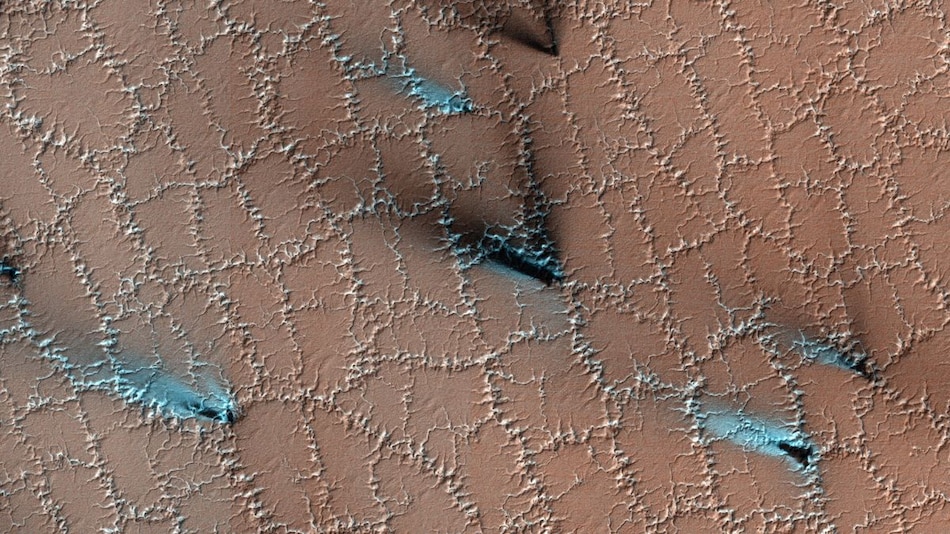 Mars landscape laced with a distinct honeycomb or spider-web pattern

The Mars Reconnaissance Orbiter has come up with a stunning photo of the Red Planet once again. This time, the HiRISE camera (High-Resolution Imaging Science Experiment), on the orbiter, caught a glimpse of a landscape laced with a distinct honeycomb or spider-web pattern. These loosely polygonal shapes obviously are not created by Martian bees or spiders but they are the result of seasonal changes. The activity of water ice and carbon dioxide over the seasons would be the instruments behind the making of such unique and distinct structural patterns.

The HiRISE camera was installed on the Mars Reconnaissance Orbiter in 2006 when it was sent to orbit the Red Planet. Since then, it has seen and captured photos of several polygon shapes. According to the team, both water and carbon dioxide played a major role in the creation of the recently discovered structures.

Water and carbon dioxide, in the solidified form known as dry ice, is instrumental in the structures found at the high latitudes of Mars. In low temperatures, water ice deposited in the soil splits the ground to form polygonal shapes and dry ice adds to it. When the ground warms up in the spring, dry ice from under the surface creates more erosion and creates channels that further establish the polygons. The formation takes several years as the near-surface ice expands and contracts according to the seasons.

The unique feature of the recently found structures is that they suggest more springtime activity. Researchers suggest that there could be more erosion in this case due to the layer of translucent dry ice. This layer coating the surface develops vents that allow gas to escape. The team of researchers said, “The gas carries along fine particles of material from the surface further eroding the channels.”

According to their website, “The particles drop to the surface in dark fan-shaped deposits. Sometimes the dark particles sink into the dry ice, leaving bright marks where the fans were originally deposited. Often the vent closes, then opens again, so we see two or more fans originating from the same spot but oriented in different directions as the wind changes.”