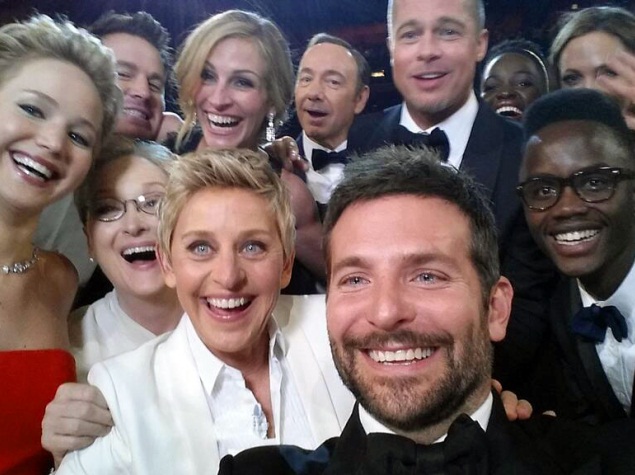 Ellen DeGeneres' celeb-studded selfie from the most-watched Oscars telecast in a decade was a landmark social media moment at a time online conversation is boosting television viewership and vice versa.

It's also a murky example of what is or isn't product placement in a hyper-marketed world. Would the world's most retweeted photo have been shot by an iPhone if Samsung hadn't been a commercial sponsor of the Academy Awards?

An estimated 43 million people watched "12 Years a Slave" win the Oscar for best picture on Sunday night. It was the most-watched Academy Awards since 2004, when "Lord of the Rings: Return of the King" was the best picture. And it was the most popular entertainment event on TV since the "Friends" finale that year. The Oscars are generally the most-watched TV event of the year after the Super Bowl.

Oscar night was also big for Jimmy Kimmel. The ABC late-night star drew just under 7 million viewers for his post-Oscars special, the biggest audience he's ever gotten on ABC, despite starting at 12:42 a.m. on the East Coast.

The ratings provide further evidence of how big event programming is a growth engine for broadcast networks, in large part because of fans watching the event and conversing with friends on tablets and smartphones. Twitter said that some 14.7 million tweets mentioning the Oscars or prominent actors and films were sent out during the Sunday night telecast, and Facebook said there were 25.4 million interactions about the show.

Social media was clearly a driving force Sunday and is why live events on networks "have become basically the currency," co-producer Neil Meron told The Associated Press.

"What it's all about right now is creating a conversation, and social media allows for the conversation as it's happening," he said.

No social media moment was bigger than when host DeGeneres briefly caused Twitter to crash after going into the audience and asking Bradley Cooper to take a picture with several other stars crowding around. Besides Cooper and DeGeneres, Meryl Streep, Jennifer Lawrence, Kevin Spacey, Julia Roberts, Angelina Jolie and Brad Pitt also crowded into the frame. She asked viewers to help her set a retweet record, and they quickly complied.

By Monday afternoon, it had been retweeted some 2.8 million times, shattering the previous record of 810,000 retweets for the photo of President Barack Obama and First Lady Michelle Obama hugging after the 2012 election. Twitter was humming at 254,644 tweets per minute after DeGeneres' request, and the company said the crush disrupted service for 20 minutes.

DeGeneres handed a Samsung device to Cooper to take the selfie. Since the Oscars host's Twitter posts from backstage included shots from an iPhone, Samsung doesn't seem to be her usual smartphone of choice. 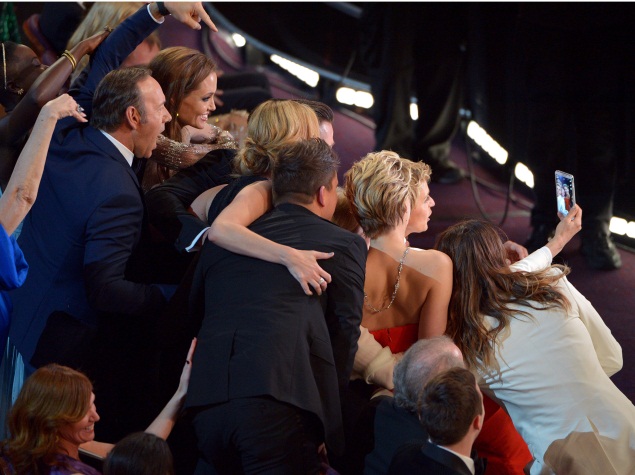 Samsung, however, was a big presence at the Oscars besides being a commercial sponsor. The company gave its phones to student presenters and encouraged them to tweet and post on Instagram with them. Dozens of Samsung phones, tablets and TVs were used to make a digital photo display in the backstage green room.

ABC said Samsung did not pay specifically for use of the camera in DeGeneres' selfie segment and the company wasn't explicitly named on the air as the stunt unfolded, but it is a noticeably larger device than an iPhone. Spokeswoman Nicole Marostica said once producers decided to do the segment, it made more sense to use a Samsung product because the company was an Oscars sponsor.

"They were just lucky beneficiaries of the whole thing," Marostica said.

Samsung said Monday that it was donating $1.5 million each to DeGeneres' favorite charities, St. Jude's and the Humane Society. The company, in a statement, did not directly address its role in seeing that its phone got the starring role.

Even more spontaneous was that galaxy of stars surrounding Ellen in the selfie shot. It was just supposed to be Streep, Zadan said. "I don't think that Ellen even knew that all of those other stars would get out of their seats and jump in and be in the picture," he said.

Use of the Samsung phone "is a wonderful example of product placement," said Tim Calkins, marketing professor at the Kellogg School of Business at Northwestern University.

"It worked because it's not a formal placement," Calkins said. "The best product placements seem natural and this seemed natural."

Samsung is the worldwide leader in smartphones but trails Apple in the United States, and the company has been aggressively going after the U.S. market.

Oddly, the audience snapshot wasn't a new element for DeGeneres. When she hosted the Oscars in 2007, she went into the audience and asked filmmaker Steven Spielberg to snap a picture of her with Clint Eastwood, saying she wanted to use it on Myspace.

Twitter said that most tweeted-about star on Oscar night was Jennifer Lawrence, with Brad Pitt coming in second. "Gravity" was the movie that was the subject of the most tweets during the show, followed by "Frozen."

A total of 11.3 million people commented on the award via Facebook, the company said. The busiest commenters were women aged 18 to 34, Facebook said, and the one moment that drew the most attention was when "12 Years a Slave" won the award for best picture.

Jared Leto had his TiVo moment Sunday night. The company said the clip of Leto's acting in "Dallas Buyers Club" was a moment when viewers paused their digital video recorders and rewound to see something again more than at any other point in the show.