Facebook IPO could force Zuckerberg to pay $903 million in taxes 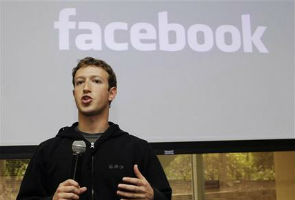 Highlights
The US tax authorities are in for a major windfall from Facebook chief Mark Zukerberg, as the upcoming IPO of the social networking giant could make him pay in taxes as much as $903 million (about Rs 5,000 crore).

Interestingly, his total estimated tax payout amounts to more than 85 percent of the total proceeds of about $1.045 billion Zuckerberg is expected to rake in from part sale of his own shares in Facebook -- leaving him with a net cash proceeds of just about $142 million (about Rs 700 crore).

Facebook's IPO is slated to hit the market later this year and could fetch in between $77-96 billion, depending on the investors' appetite. The IPO roadshow, which would seek to attract investors for putting in their money in the social media behemoth, would begin tomorrow.

As per an analysis by US-based research firm, PrivCo, the 27-year old Zukerberg stands to pay as much as $714 million in national taxes and another $189 million as state taxes to California, while still pocketing $142 million.

"According to our calculations, Mark Zuckerberg will be paying an estimated $189 million payment to the State of California this year as a result of the Facebook IPO, expected to be completed this month,"

PrivCo Founder & CEO Sam Hamadeh said. PrivCo assumes total tax of 43 percent, a combination of maximum federal tax of 36 percent and the maximum California tax of 9.3 percent, less partial federal deductions for state taxes paid."He will have to incur a combined state and federal tax rate of 43 percent on the $2.1 billion for a total tax payment of $903 million incurred at the IPO date," PrivCo said in its report.

The agency added that the tax proceeds from Zuckerberg will help the State of California deal with budget deficits. "The funds are badly needed as California continues to suffer from budget deficits, and could not have come at a better time for the state," Hamadeh said.

"More taxes will come due as more shares are sold beginning in December and well into 2013 after the traditional 180-day post-IPO 'lock-up' period expires and employees can sell even more shares, resulting in new capital gains taxes to California - and the IRS (Internal Revenue Service) - with each new stock sale," Hamdeh noted.