The new Huawei tablet is a direct competitor to the Apple iPad Pro. 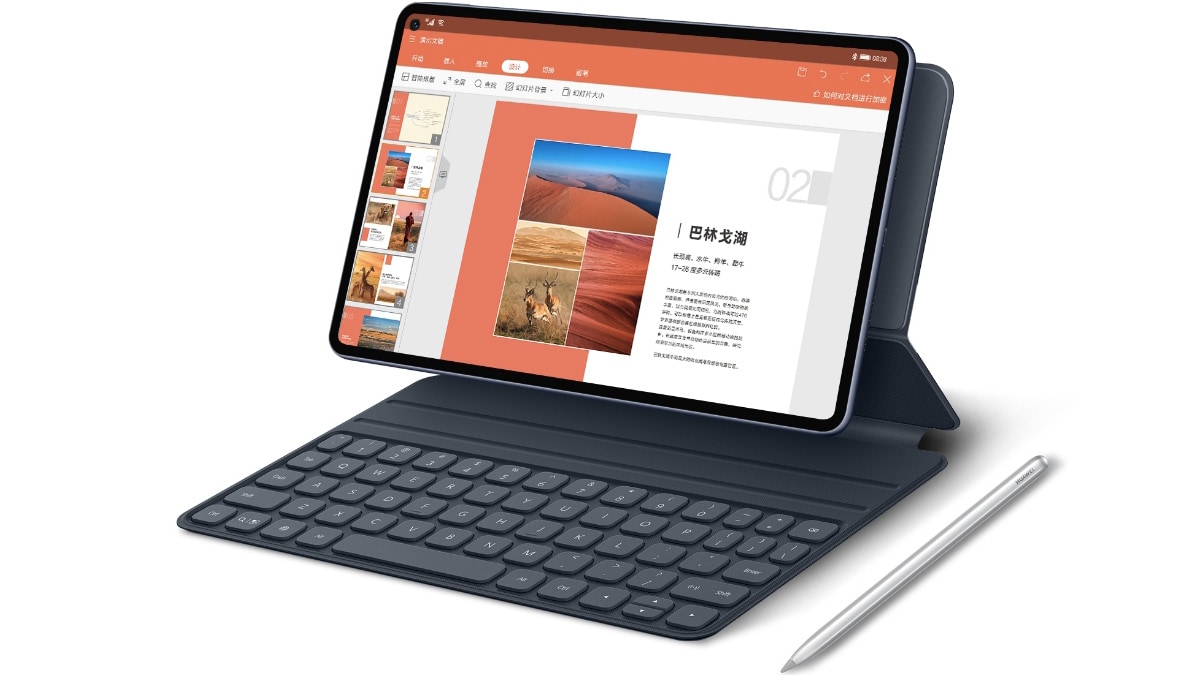 The Huawei MatePad Pro supports and optional keyboard and stylus, called the M-Pencil

Huawei has officially launched the MatePad Pro, its brand new tablet deigned for creators. The tablet has been launched in China in multiple colours, along with different RAM and storage configurations. The MatePad Pro bears a striking resemblance to the Apple iPad Pro, with the rounded corners and slim bezels. One of the highlight features is that it supports wireless and reverse wireless charging, making it the first of its kind for a tablet. While the current models on offer only support LTE, Huawei has confirmed that a 5G version will arrive in Q1 2020.

Huawei will also have a host of accessories to go with the MatePad Pro. The optional keyboard cover will cost an additional CNY 699 (roughly Rs. 7,100), while the M-Pencil will cost CNY 499 (roughly Rs. 5,000).

Going by the translated Chinese text from Huawei's product page, the MatePad Pro measures about 7.2mm in thickness and weighs 460g. It has a screen size of 10.8 inches diagonally, with DCI-P3 colour gamut and a QHD+ (1600x2560) pixel resolution. It is powered by a Huawei Kirin 990 SoC that is the company's flagship processor. The tablet supports expandable storage but uses Huawei's proprietary NM standard and not microSD. You also get four Harman Kardon-tuned speakers, two on each side of the tablet, which promises 3D stereo sound.

It packs a 13-megapixel rear camera sensor, with an f/1.8 aperture and phase detection autofocus (PDAF). The tablet can record up to 4K resolution videos. In the front, there is an 8-megapixel camera with support for up to 1080p video recording. The MatePad Pro features shooting modes such as slow-motion, timelapse, subject tracking and lots more.

In terms of software, the MatePad Pro runs on EMUI 10 that features a new visual design, split-screen multitasking and support for controlling your Huawei smartphone's functions through a virtual window within the tablet. It also has a “computer mode,” which lets you get a desktop like interface on the tablet, similar to Samsung's DeX. The M-Pencil can be used for drawing or sketching and charges when clipped onto the top of the MatePad Pro, magnetically. An hour of charge is said to offer around 10 hours of continuous usage.

It packs in a 7,250mAh battery, with support for fast charging up to 40W. The MatePad Pro is also capable of charging wirelessly up to 15W and can do reverse wireless charging up to 7.5W.

WhatsApp New Features: WhatsApp Spotted Working on Self-Destructing 'Delete Message' Feature in Latest Android Beta
Tesla Cybertruck Windows Would Have Been Unbreakable if Not for the Sledgehammer: Elon Musk