iPadOS 16 brings some exclusives to iPad models based on the M1 chip. 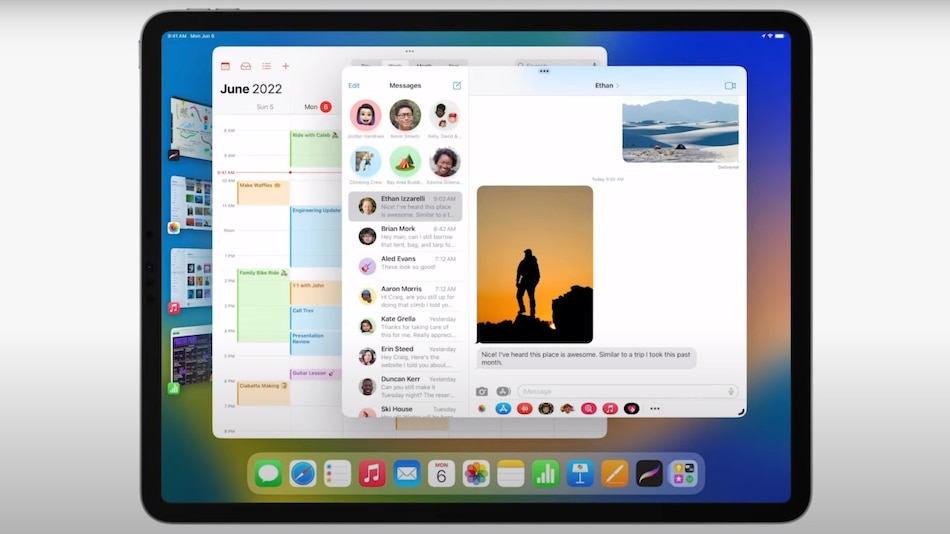 Apple unveiled iPadOS 16 as its new software release for the iPad at the WWDC 2022 keynote on Monday. The new iPadOS release comes with a redesigned multitasking interface that is aimed to help enhance productivity. It brings the ability to overlay app windows just like how you can on a Mac or Windows machine. Similar to iOS 16, iPadOS 16 includes updates including Live Text and the updated Messages for iPad users. The new release also includes support for games developed using Metal 3 engine.

Continuing to silently bridge the gap between the MacBook and iPad, Apple has introduced its new multitasking interface on iPadOS 16, called Stage Manager, that is also available to Mac machines through macOS 13 Ventura. It allows users to access multiple apps on the iPad simultaneously by overlaying them one over another. The experience even grows further when you connect your iPad to an external display. This is an upgrade over the existing interface where users are allowed to access apps in a full-screen view like the one on an iPhone or access two apps side-by-side that Apple calls Split View. Further, there is an option to slide over an app from the side, which is called Slide Over.

The iPadOS 16 update will also enable users to resize app windows like on a Mac or a Windows laptop. This feature is, though, exclusive to the iPad models that are powered by the M1 chip. This means that you won't get the new experience if you don't own the latest iPad Air or iPad Pro.

Users on the iPad with the M1 chip also gets Collaboration to let users collaborate on different tasks. Users can access the feature through the Notes, Safari, Keynote, and other preloaded apps on the iPad. The Collaboration feature is also coming to iOS and macOS later this year, Apple said.

Apple has also brought an app called FreeForm to enhance the collaboration experience. It lets users share files, jot notes, or create diagrams with others. Developers will also get a new API to integration Collaboration into their apps.

Similar to iOS 16, iPadOS 16 comes with Live Text and Visual Look Up. The new release also includes the Home app with an all-new design and support for Matter. Further, the iPadOS update brings the new Messages app that is available through the new iOS release to let users edit or recall a text message.

For gamers, iPadOS 16 brings an enhanced gaming experience that supports Metal 3. The company has also brought a Background download API that allows users to multitask while the game download completes. Gamer Center has also received Activity to the dashboard to let users look at the performance of their friends. The activity of users will also appear on the Game Center profile of users. Further, multiplayer games played via Game Center can access SharePlay to start a session with your friends.

Apple said that all the updates to Game Center will be available to users as an update on iPadOS 16 later this year. The features will also be available to iOS and macOS users in the future.

The iPadOS 16 update also carries Live Text updates that are coming to the iPhone through iOS 16. Similarly, there is the updated Family Sharing feature to help users add new age-restricted features. The new iPadOS release also includes the updated Home app with an improved interface and lock screen widgets.

Apple introduced Quick Note, which was previously available to the Mac, to let you quickly write notes. The new iPadOS release also comes with the new Safari browser that is also available on macOS Ventura and brings features such as Shared Tab Groups and Passkeys. Additionally, Apple has brought the Weather app to the iPad through iPadOS 16. It brings full-screen animations as well as tappable modules with access to detailed information. Developers are also getting WeatherKit to let them integrate weather updates into their apps.

Additionally, Apple announced 'Desktop-level' apps coming to the iPad through iPadOS 16. These will be able to use system elements such as undo/ redo across the system, availability view in calendar, and find and merge cards in Contacts. The company has also updated the Files app on the new iPadOS release with the ability to change file extensions, view folder size, and expand folders in the list view. There are also system-wide features that are aimed to deliver improvements across apps, including the redesigned find-and-replace experience, document menu in Files, Pages, and Keynote, and customisable toolbar to let users add tools of their choice. Apple has also added a feature called Reference Mode to enhance colour viewing on the Retina XDR Display featuring iPad Pro.

For Pro users on the iPad with the M1 chip, iPadOS 16 brings the ability to let users increase the pixel density of the display and view more in their apps. It is especially useful when running two apps in the Split View. Apple has also brought Virtual Memory Swap to let users virtually expand the available memory for their apps by up to 16GB by using the onboard storage on their iPad.

The list of new features coming through iPadOS 16 as well as the expansion of Apple's pro apps to the iPad is likely to help the company grow its revenues coming from tablets over time. The updates would also make the iPad a better pick for professionals over Android tablets.