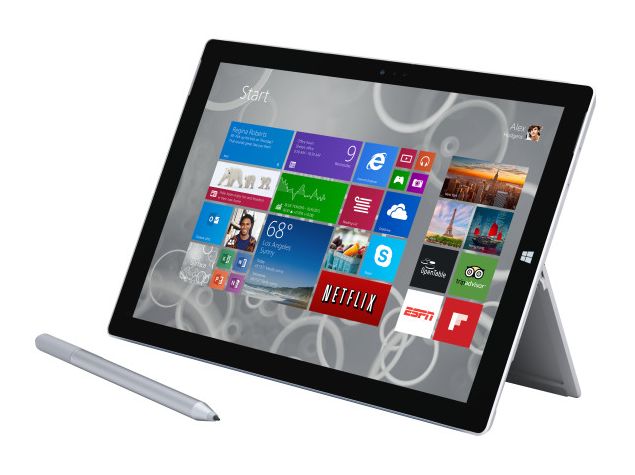 Microsoft unveiled the Surface Pro 3 tablet in May, and the 2-in-1 hybrid went on sale in the US in June. DisplayMate Technologies, an established display testing firm, has on Wednesday posted its display review of Microsoft's latest tablet, saying it is one of the best tablet displays it has ever tested.

"The 12-inch Surface Pro 3 tablet has one of the very best and most accurate displays available on any mobile platform and OS," said Raymond Soneira, President of DisplayMate on the official website.

According to the review, the Surface Pro 3's display is only behind the Super AMOLED display on the Samsung Galaxy Tab S 10.5, and on several parameters, competes on an even footing.

Soneira stated that the Surface Pro 3 tablet's 3:2 aspect ratio comes with "an excellent compromise" between the 4:3 and 16:9 aspect ratios. Also appreciated was the tablet's high 2160x1440 pixel resolution that packs 3.1-megapixels, said to be 50 percent more than conventional HDTVs, in a 12-inch screen. Soneira however added that the tablet screen's pixel density (216 ppi) was lower than its rival tablets, Apple iPad Air (264 ppi) and Samsung Galaxy Tab S 10.5 (287 ppi), due to the larger size of the display.

As for the Surface Pro 3 display's colour accuracy, Soneira said it had the "most accurate on-screen colours of any tablet or smartphone display that we have ever measured for the sRGB/Rec.709 Standard that is used in virtually all current consumer content..." The tablet's colour gamut is said to be 97 percent, which is very close to the standard gamut used for reference.

Besides featuring a higher resolution, the Surface Pro 3's display is rated to be more power efficient than the display on the iPad Air, which according to DisplayMate uses 66 percent more power than the Surface Pro 3. The tablet's display has also got a Very Good brightness rating at 371 nits, but is behind the iPad Air (449 nits) and Kindle Fire HDX 8.9 (527 nits).

The Surface Pro 3's display's screen reflectance at 5.9 percent is rated as Very Good, but once again falls between the iPad Air (6.5 percent) and Amazon's Kindle Fire HDX 8.9 (5 percent) tablets, but far behind the Galaxy Tab S 10.5, with its 4.7 percent screen reflectance. To see more points of comparison between the Surface Pro 3's display and other tablet displays, visit the DisplayMate review.

To recall, the Microsoft Surface Pro 3 features a 12-inch 2160x1440 pixel display, and runs Windows 8.1 Pro. The tablet comes with a choice of Intel i3, i5 and i7 processor variants, and features 4GB of RAM. The device comes with 64GB of inbuilt storage and a 5-megapixel rear camera.