Realme Watch 3 illustrations on the company’s website show a physical button on the right side of the smartwatch. 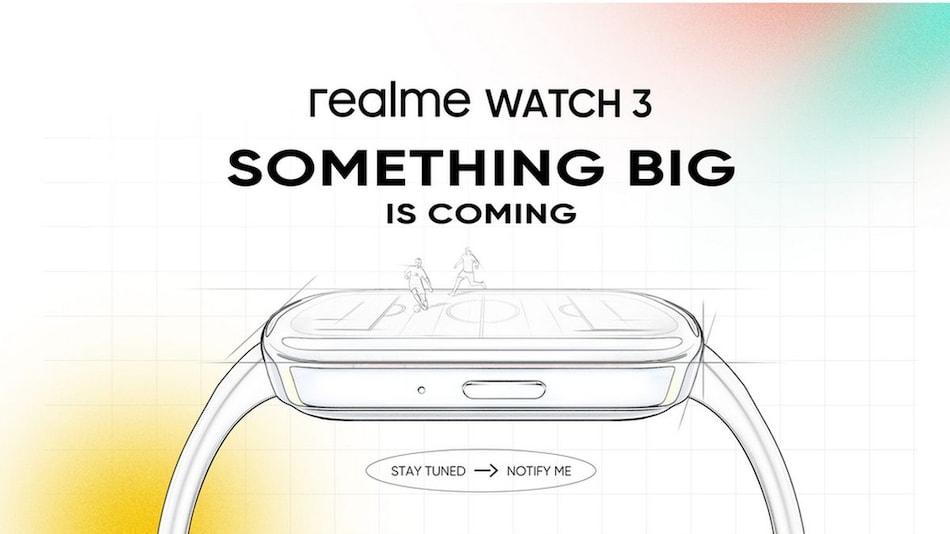 Realme Watch 3 has been teased by the company ahead of the launch of the smartwatch in India. The successor to the Realme Watch 2 will feature Bluetooth calling and is teased to sport a bigger display compared to its predecessor. The Realme India website reveals some design features of the smartwatch with sketch-like illustrations. It can be seen sporting a square dial and a physical button on the side next to a small hole, which is likely to house the inbuilt microphone for the calling function. Meanwhile, a smartwatch with similar design features was teased by Realme TechLife.

The landing page for the upcoming Realme Watch 3 on the company's official India website reveals that that the smartwatch will launch in the country soon. The landing page has also revealed some specifications and design features of the wearable through sketch-like illustrations. Realme has revealed that the Watch 3 will feature Bluetooth calling function and a larger display that the Realme Watch 2.

Watch out for those curves! pic.twitter.com/WNtdqDDjsi

The illustrations shared by the company also reveal that the Realme Watch 3 will feature a square dial, similar to its predecessor, and a physical button on the side. Next to the button, a small hole can be seen that might house the microphone to enable the calling function. Unfortunately, this was all that the company has revealed about the smartwatch.

On Twitter, Realme TechLife has also teased a smartwatch with similar design features. This particular smartwatch can be seen with a black dial that is square in shape and grey strap. It also shows a rectangular physical button on the side.

Realme Watch 3 price in India is yet to announced by the company. To recall, the predecessor of the Realme Watch 2 was launched in India in July last year with a price tag of Rs. 3,499. Although, it is unlikely the pricing of the new smartwatch will be same as last year's model, it can be expected to be priced around the same figure.

Realme Watch 3, as mentioned above, is confirmed to feature a bigger screen that the Watch 2 and will come with Bluetooth calling function. It can also be expected that the smartwatch will come with upgrades over its predecessor. For reference, Realme Watch 2 sports a 1.4-inch display with 320x320 pixels resolution. It also comes with support for 90 sports modes and offers Bluetooth v5 connectivity. The smartwatch also features heart rate and SpO2 monitoring, along with Hydration and Sedentary Reminder function. It has an IP68 rating for dust and water resistance.