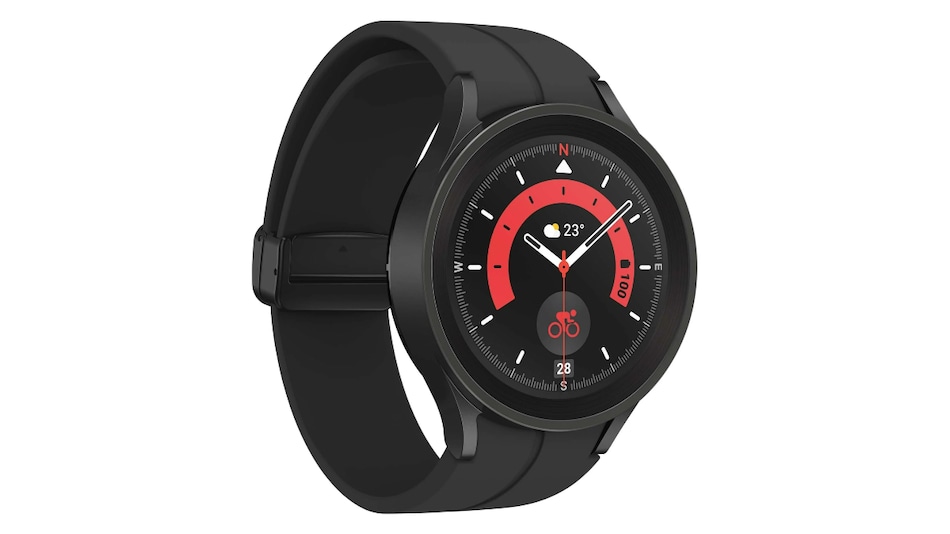 The Galaxy Watch 5 Pro is said to have a 1.36-inch AMOLED display

The LTE variants of these Samsung smartwatches might demand up to EUR 50 (roughly Rs. 4,000) more.

The Galaxy Watch 5 Pro is said to sport a titanium body with a 45mm diameter. It reportedly features a 1.36-inch AMOLED display with a resolution of 450x450 pixels. It is likely to house a 590mAh battery, which could provide up to 80 hours of backup. Earlier report hinted that the Galaxy Watch 5 Pro could pack a battery that might last at least three days. This smartwatch is expected to feature an Exynos W920 SoC. It is supposedly 10.5mm thick and weighs about 46.5g.

The Galaxy Watch 5 is expected to come in 40mm and 44mm sizes. The former might sport a 1.19-inch AMOLED display with a 396x396 pixels resolution, whereas the Galaxy Watch 5 (44mm) could feature a 1.36-inch AMOLED panel with a 450x450 pixels resolution. These smartwatches are supposed to offer a battery life of up to 50 hours — the 40mm variant might pack a 284mAh battery while the 44mm model could house a 410mAh battery. Both models are supposedly 9.8mm thick. They 40mm variant weights 28.7g and the 44mm model has a weight of 33.5g.

Furthermore, the Galaxy Watch 5 Pro and Galaxy Watch 5 could come with sapphire glass display covers. All of the models could support up to 10W wireless charging. They are said to include up to 16GB of internal storage. These smartwatches could include GPS and NFC support. The LTE variants of the Galaxy Watch 5 series are expected to feature eSIM support. They could include heart rate, blood oxygen saturation, and ECG sensors. They seemingly can also carry a new optical sensor for tracking body temperature.