Realme TechLife Watch S100 Review: Affordable, but Is It Capable?

Is this the best affordable smartwatch you can buy right now? 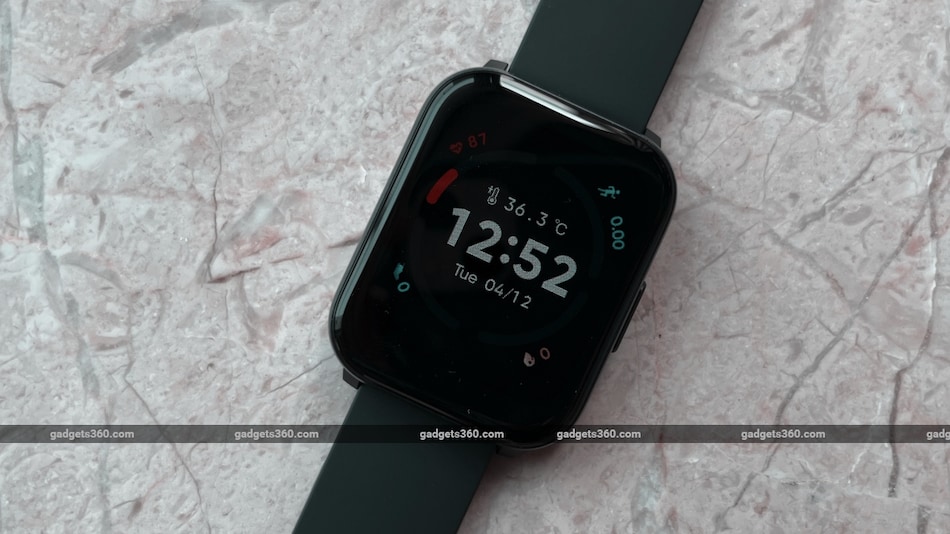 Multiple brands including Realme, Realme TechLife, and Dizo now operate under Realme's aegis, benefiting from the company's research and development capabilities, sales and service network, and brand reputation in India. Realme TechLife has a rather varied range of products in India, including vacuum cleaners, wireless earphones, and smartwatches. The product I'm reviewing here is the Realme TechLife Watch S100, an affordable smartwatch that promises a lot of features for the price.

Retailing at Rs. 2,499 in India, the Realme TechLife Watch S100 is among the most affordable smartwatches you can buy right now across the company's various brands. In terms of features, there's a lot on offer here, including heart rate and SpO2 tracking, as well as body temperature monitoring. Is this the best affordable smartwatch you can buy right now? Find out in this review.

Many affordable smartwatches sport rectangular screens, including some of Realme's own offerings. Most of these designs are inspired by the Apple Watch. The Realme TechLife Watch S100 does borrow that look, but its low cost is naturally reflected in the design and build quality of this device. That said, it is a decent-looking smartwatch for its price.

The Watch S100 has a 1.69-inch rectangular colour display with a resolution of 240x280 pixels and a rated peak brightness of 530 nits. The screen is placed in a plastic casing which has thick borders on all sides. There is a single physical button on the right. The underside of the watch has the contact points for the magnetic charger, optical sensors for heart rate and blood oxygen monitoring, and a sensor for measuring body temperature.

The single button on the Realme TechLife Watch S100 controls power (long-press to turn it on or off), and standby (short press to wake the screen or turn the screen off). It also takes you back one step if you're in a menu. For navigation and device controls, the touch screen responds to swipes and taps to cycle between menus and make selections within the user interface.

The 20mm rubber strap on the Realme Watch S100 is comfortable, and has plenty of adjustment points for a suitable fit. It's also removable and replaceable. The smartwatch is available in two colours – black and grey – and is IP68 rated for water resistance, making it safe to use it in most everyday circumstances, including when showering or swimming.

At 34g, the Realme TechLife Watch S100 is light and easy to handle. It has a 260mAh battery and an accelerometer, in addition to the temperature sensor and optical sensors used for heart rate and blood oxygen monitoring. For connectivity, the smartwatch uses Bluetooth 5.1 and works with the Realme Fit app to maintain a connection with your paired smartphone.

Included in the sales package is a charging cable, which attaches to the bottom of the watch magnetically at the charging points. A wall adapter is not included in the box but you can use any charger you have or a computer's USB port. The cable attaches easily enough to the watch, but can come off with even a little bit of jostling, so you'll need to make sure it's secure while charging.

As is the case with most low-cost smartwatches, the Realme TechLife Watch S100 runs its own software, but needs a companion app to handle synchronisation with the paired smartphone. The user interface of the smartwatch is fairly straightforward, and is similar to what I've seen on other Realme smartwatches such as the Realme Watch 2 Pro.

Swipes and taps on the watch's display will help you navigate the Realme TechLife Watch S100's UI. There is a quick settings menu for easy access to the battery status, brightness control, DND toggle,  flashlight, and settings menu. There is a notification shade to show notifications from selected apps, and widgets for fitness and health tracking data. You can also access the full list of apps that come preinstalled on the smartwatch.

Watch faces can be changed directly on the smartwatch by tapping and holding down on the home screen. Three watch faces are preinstalled and are always available, while a fourth can be chosen and synced using the companion app, and is replaced if you pick a new one from the watch face library.

There are specific apps on the Realme TechLife Watch S100 let you use all its functionality such as its sensors and health tracking features, as well as the flashlight. You can set alarms and timers, track workouts, trigger your phone's camera shutter, and control music, among other things. However there is no way to install new apps on this smartwatch.

Unlike the Realme Watch 2 Pro and many other devices from the company which rely on the excellent Realme Link app, the Watch S100 uses the Realme Fit app. This app is available on both Android and iOS, and lets you view detailed fitness and health data, control workouts, change device settings, and choose which apps are allowed to send notifications to the smartwatch.

The app worked well, ensuring good connection stability and reliable notification pushes, when paired with my OnePlus 9 (Review). However, the app itself isn't as well designed as Realme Link. I noticed strange typos and odd phrases that seem to be translation gaffes. This led to an awkward experience at times. It would definitely have been better if the company had gone with the tried and tested Realme Link app instead.

Most wearables priced under Rs. 3,000 tend to be of the fitness tracker variety, with small and basic screens. It's therefore worth noting that the Realme TechLife Watch S100 looks and behaves more like a smartwatch, with a large colour screen, fitness and health tracking features, and large collection of watch faces for customisation and personalisation.

The large screen makes a big difference in terms of text legibility, and you can easily check notifications. You can only see basic details in some notifications and you can't respond to them from the smartwatch. You can dismiss the notification for an incoming call, but your phone will keep ringing even if you tap the ‘decline' icon on the Watch S100.

The watch faces on the Realme TechLife Watch S100 look quite nice. Many of the watch faces have preset complications, with live indicators for things such as heart rate, steps, and body temperature, among others. I liked the preinstalled faces the most, but there are over 100 more to choose from in the Realme Fit app.

Temperature monitoring is an interesting feature on the Realme TechLife Watch S100, with two separate readings for skin and body temperature

Health and fitness capabilities on the Realme TechLife Watch S100 include step, sleep, heart rate, blood oxygen, and body temperature tracking. Workout tracking uses step and heart rate data to estimate distance covered and calories burnt. Other tools on the smartwatch include a flashlight (which illuminates the screen with bright white light), stopwatch, timer, alarm, weather report, camera shutter remote, and music playback remote, all of which worked as expected.

The watch accurately tracked my sleep and also provided some insight on the breakup of light and deep sleep. The app maintains charts to help you keep track of how well you've been sleeping over the course of a week or month. The device can log several workout types, including walking, cycling, yoga, cricket, football, and basketball, and various free training exercises. These are said to be geared to measure activity specific to each exercise or sport, but for this review, I stuck to the basics and tested the Realme TechLife Watch S100 only with walking.

When manually counting 1,000 steps, the Realme TechLife Watch S100 counted 1,048 steps, an error margin of a little under five percent. When compared to the Apple Watch Series 5 over longer distances (with both devices worn simultaneously), the error margin rose to around 1,055 steps on the Realme TechLife Watch S100 per 1,000 steps on the Apple Watch. This wide an error margin can be expected from a device in this price range, but such an overestimation will affect the accuracy of your workout tracking.

Heart rate tracking on the Realme TechLife Watch S100 was accurate only when sitting down or standing still, and even then, it usually took a few seconds to arrive at a reading that matched what my pulse oximeter showed. When walking, readings seldom matched what the Apple Watch reported, often off by up to 20bpm.

Blood oxygen readings were similarly iffy on the Realme TechLife Watch S100, with completely different results from what the pulse oximeter showed. These readings also fluctuated by 1-2 percent every few seconds, while the pulse oximeter held a steady number.

Battery life on the Realme TechLife Watch S100 was decent, with the device running for around eight days on a single charge with ordinary use. This is similar to the more expensive Realme Watch 2 Pro which has a larger battery and GPS connectivity, but is nonetheless pretty good for a device in this price range and with this feature set.

Affordable smart wearables often tend to focus on fitness and health tracking, and are really just fitness bands with minor smartwatch functionality. Devices such as the Realme TechLife Watch S100 are designed to look like premium smartwatches, while keeping costs low. It might offer all kinds of functionality, but this particular smartwatch doesn't quite deliver when it comes to fitness tracking, and its main appeal is really only its large colour screen and notification functionality.

Step counting, heart rate, and blood oxygen tracking were all quite inaccurate in my experience. The app is also a bit strange in design. However, the good screen, reliable connectivity, legible notifications, and decent battery life make this a smartwatch worth considering if you have a budget of under Rs. 3,000. If you don't mind the fitness band form factor, you could also consider the excellent Mi Band 6 which is priced at Rs. 3,499 in India.