Developers have almost three months to complete the section with information about what data their apps are collecting and for what purposes. 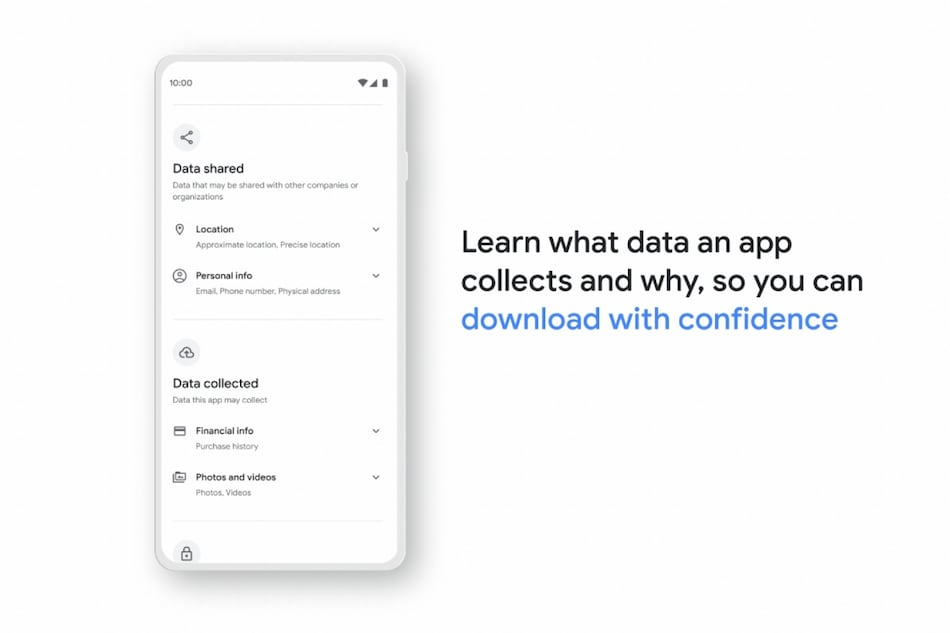 Google on Tuesday announced the release of its Data safety section in Google Play that will allow users to look at the information about how apps collect, share, and secure their data. The move, which was first announced in May last year, is similar to how Apple introduced privacy nutrition labels in 2020. All developers publishing their apps on Google Play are required to complete the new section with information about how their apps collect and share user data by as early as July 20.

Users will start seeing the Data safety section in Google Play from Wednesday, Google said in a blog post. The section will have different elements to let users know what data an app is collecting and for what purpose it is being collected. It will also show users whether the developer of the listed app is sharing their data with third parties.

Google said that the Data safety section will help users get "more visibility into how apps collect, share, secure their data" on their Android devices.

Information developers can show in the Data safety section, as per Google:

Users will start seeing the section when they are visiting one of the app listings on Google Play.

Google initially informed developers about the change last year. It also confirmed at the time that alongside apps from other developers, Google apps will also be a part of the update and will show data safety information in the new section.

One of the issues that several researchers pointed out with Apple's nutrition labels is the list of fake and misleading privacy labels. In some cases, app developers didn't even include all the elements for which they were taking user data. All this is majorly due to negligence at Apple's level as it has not made any rigorous restrictions for developers to provide accurate information and filter out the apps carrying misleading labels.

Google on its part said last year that the apps that "don't become compliant will be subject to policy enforcement." It also stated that new app submissions and app updates starting the second quarter "must include the information" on their listings.

However, the Android maker has not yet provided any guidelines on how it would handle misinformation from developers.

Play Store already has the problem of fake apps that even spread malware several times in the past. Some of those apps were pulled by Google when reported, though. It, thus, seems interesting to see how the official Android store will be able to deal with any false information that may come from, at least, some developers.

Gadgets 360 has reached out to Google for a comment on the matter and will update this article once the company responds.