Signal Tops App Store and Google Play Charts in India and US, Thanks to WhatsApp Privacy Change 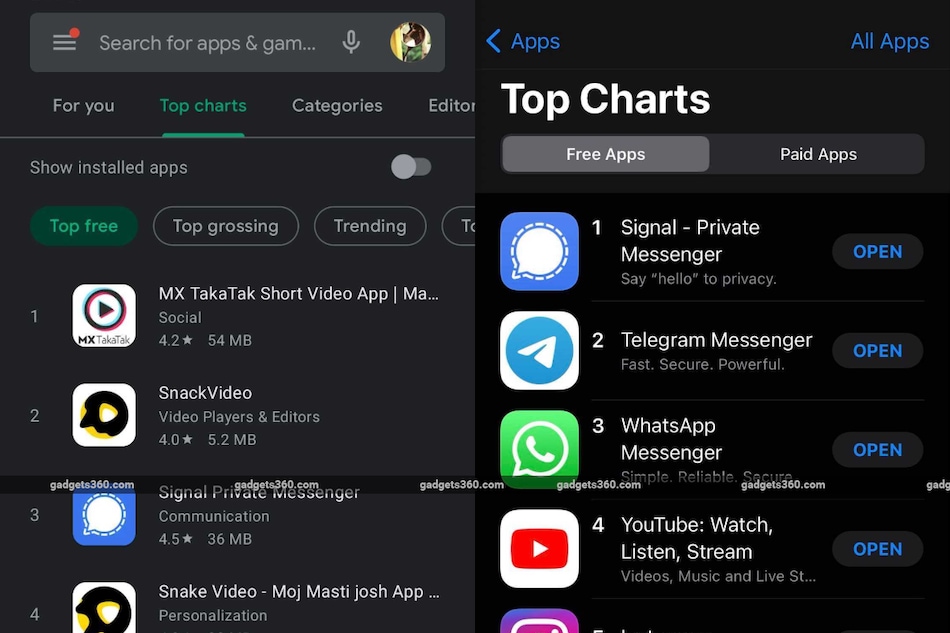 Signal is now at the top of the charts on App Store in India. The app is on the number one position in the top free apps in the Indian market, while on Google Play store, it takes the third position. These massive new downloads have been generated due to the ongoing WhatsApp controversy regarding its updated privacy policy. WhatsApp is forcing people to agree to its updated terms and policies, warning users that if they don't accept the new terms, they will not be able to use the app after February 8. This has resulted in several WhatsApp users leaving the messaging platform and migrating to Signal instead.

Signal recently also tweeted that the app has been listed as the top free app on Apple's App Store charts in India, Austria, France, Finland, Germany, Hong Kong, and Switzerland.

This movement of WhatsApp users shifting to Signal gained a lot of momentum after Tesla's Elon Musk advised his 41.9 million followers to use Signal. Even popular whistleblower Edward Snowden and Paytm CEO Vijay Shekhar Sharma later tweeted at their followers to move to Signal. Sharma goes on to say that WhatsApp and Facebook abuse their monopoly by taking away millions of users' privacy for granted.

Just a day after Musk's tweet, Signal reported that it was seeing massive spurge in new registrations resulting in verification code delays for few network carrier users. However, this glitch was fixed soon after, and users should be able to sign up on to Signal without any hiccups.

In a recent tweet, Signal also accused Facebook of paying money to show Messenger as the top result when some people search for ‘Signal' in the App Store. To this Signal retorts, “There will never be ads in Signal, because your data belongs in your hands not ours.” Signal was founded by WhatsApp co-founder Brian Acton and it is considered as the gold standard for privacy among top journalists, academics, and even security experts.

Apart from Signal, users are also shifting to other messaging apps like Telegram. WhatsApp has clarified that the new privacy policy is addressed towards business accounts, and personal consumer accounts see no change in policy terms. However, the forced nature of these terms and the ultimatum offered by WhatsApp to accept this new policy has not gone down well with users.