Sony announced the Inzone range of gaming-focused peripherals recently, and the new products are now listed for sale in India. 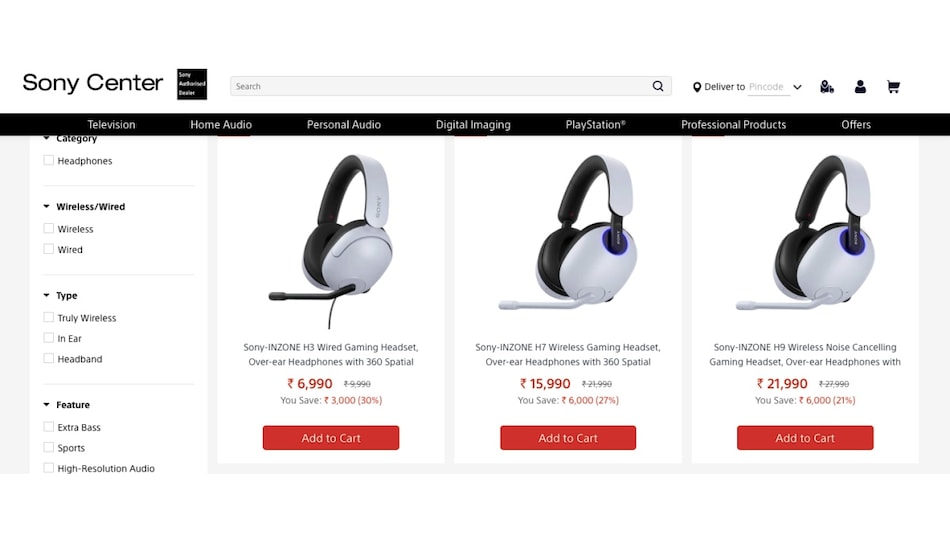 The Sony Inzone H9 is priced at Rs. 21,990 on the ShopAtSC online store

Sony Inzone gaming headphones have been quietly listed for sale in India by the Japanese electronics brand, with three models available to buy on the ShopAtSC official online store. Although there has been no official announcement from Sony on the launch of the new headphones, the Inzone H3, H7, and H9 gaming headphones are listed online with prices starting at Rs. 6,990, and are also available for purchase. Sony announced the Inzone sub-brand recently, with a focus on gaming peripherals such as headphones and monitors.

As per the listings originally spotted by Twitter user and former Gadgets360 Gaming Editor @RishiAlwani, the Sony Inzone H3 is priced at Rs. 6,990, the H7 is priced at Rs. 15,990, and the H9 is priced at Rs. 21,990. All three headsets are available for purchase, with Sony promising delivery within six days to certain PIN codes.

Out of the three headphones listed for sale in India, the entry-level Sony Inzone H3 features wired connectivity, while the Inzone H7 and H9 are wireless headsets with Bluetooth and 2.4GHz wireless connectivity. All of the headphones can be customised and used with the Sony Inzone Hub software on PC, for fine tuning of frequency response and equaliser settings. All three headphones are made for use with PC and modern gaming consoles, including the Sony PlayStation 5.

The H7 and H9 can simultaneously be used with both Bluetooth and 2.4GHz wireless connectivity, with the former preferred for calls and chats with a smartphone, and the latter in use for game audio using a USB dongle. This ensures that wireless audio is transmitted without any significant latency or reduction in quality - critical during gaming, where sound directionality and timing are important to the gameplay.