As the cryptocurrency market surged earlier this year, it brought into focus the massive energy consumption digital coin mining takes. 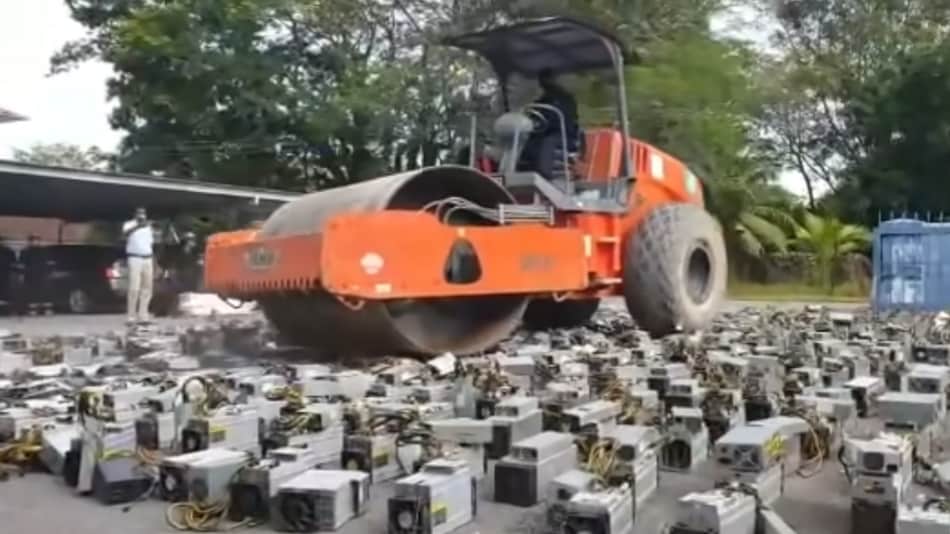 Bitcoin mining rigs were crushed by the Malaysian police with a steamroller, a video of which has now gone viral on YouTube. The police last week crushed more than a thousand electronic rigs used by Bitcoin miners illegally, with a steamroller. Authorities in the city of Miri in the coastal Sarawak state reportedly seized 1,069 rigs from miners who allegedly stole electricity to run mining operations. The devices were seized between February and April and have an estimated value of MYR 5.3 million (roughly Rs. 9.4 crores). Eight people were reportedly arrested for being involved in mining activities using stolen electricity.

The authorities, however, did not mention why the police decided to destroy the rigs in such a dramatic way, and not use the expensive systems for something else.

A local news outlet in Sarawak, Dayak Daily, uploaded the video on YouTube that shows the rigs being steamrolled. Watch the video below:

As the cryptocurrency market surged earlier this year, it brought into focus the massive energy consumption in mining digital coins. The energy-intensive “proof-of-work” process, through which Bitcoins are earned/generated, makes computers compete to solve complex mathematical equations. Given the competitive element in the quest for valuable cryptocurrency, powerful mining rigs — PCs purpose-built to maximise mining rewards — are preferred by cryptocurrency miners.

A total of 1,069 units of Bitcoin mining rigs were seized in the Malaysian city, reported local newspaper The Star. All the seized rigs were “disposed of” at the Miri district police headquarters on Friday, July 16.

Electricity theft is a major issue in regions where Bitcoin is mined as some miners use illegal means to secure the power supply necessary to make a big profit from cryptocurrency mining. Because of the additional pressure it puts on the electric grid, authorities have to often resort to load sharing that results in regular outages.