Mismatched season 2, and The White Lotus season 2 lead the lineup. 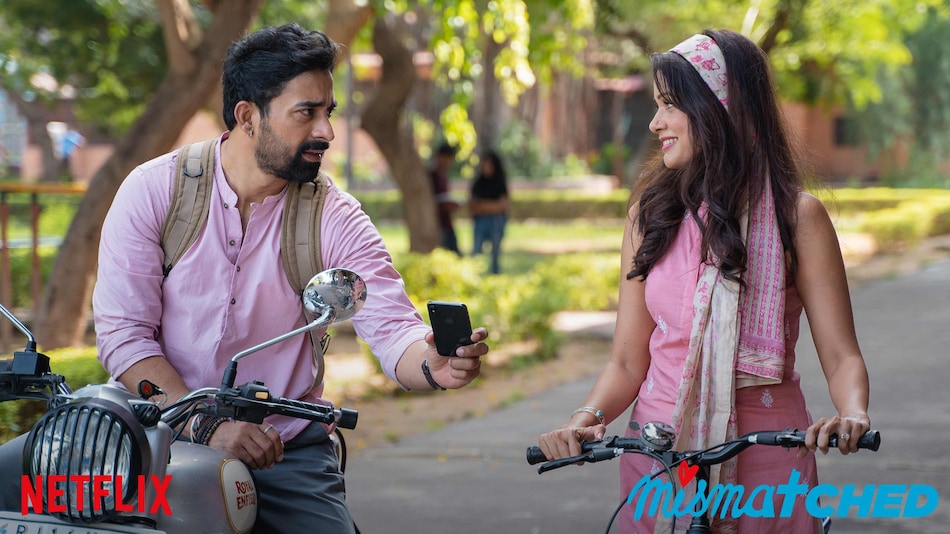 What is the biggest new TV series in October 2022? On the back of two months that gave us two big-budgeted epic fantasies — the Game of Thrones prequel spin-off House of the Dragon in August, and The Lord of the Rings prequel spin-off The Rings of Power in September — October is downright quiet. There is not a single title that can hold a candle to those two, both of which are set to wrap up their first season this month. That said, there's plenty of variety on offer in October, be it an Irish comedy, American horrors, a VR-driven sci-fi, a Bombay-set drama, and a Sicily-set rich people satire.

Black Adam to Ram Setu, the 7 Biggest Movies in October

Apart from the seven featured picks below, you can discover all upcoming TV shows and web series at our entertainment hub. There's a bunch of Korean series, a new Star Wars animated series, the return of a popular dating show, and the sixth season of a hormonal nightmare. With that, here's our October 2022 guide to TV shows and web series on Netflix, Apple TV+, Disney+ Hotstar, and Amazon Prime Video.

The girls — Erin (Saoirse-Monica Jackson), Orla (Louisa Harland), Clare (Nicola Coughlan), and Michelle (Jamie-Lee O'Donnell) — and “I'm a Derry girl” James (Dylan Llewellyn) are anxiously awaiting the results of their GCSE examinations at the start of the third and final season. (GCSE is the equivalent of Class 11 in India.)

The trailer for Derry Girls season 3 promises Sister George Michael (Siobhán McSweeney) showing up in a DMC DeLorean, like she's out of Back to the Future. And we'll actually get a bit of the future — a 45-minute flashforward special, that aired after the season finale, will take us to the days of the Good Friday Agreement between the British and Irish governments.

Delayed a couple of years thanks to the COVID-19 pandemic, Derry Girls season 3 premiered in mid-April on Channel 4 in the UK. It's taken nearly six months for it to arrive on Netflix around the world. All seven Derry Girls season 3 episodes will be available together for binge viewing.

Mike Flanagan returns this spooky season with an adaptation of the Christopher Pike novel, The Midnight Club. Adia (Iman Benson) is the newest inductee to the Brightcliffe Hospice, a home for terminally ill teenagers to come together, during their last moments of life. Headed by the enigmatic Dr. Georgina Stanton (Heather Langenkamp), there seems to be a creepy vibe about the place, specifically in the basement.

At the stroke of midnight, seven kids, including Aida, come together to tell horror stories — akin to Nickelodeon's Are You Afraid of the Dark. Only, more grimly toned. One night, they make a pact, where the first one to succumb to their illness has to communicate with the living from beyond the grave. After one of them dies, a bizarre set of circumstances follow, causing every waking hour to be filled with tension and malady.

It is also quite refreshing to see Flanagan incorporate some jump scares into his work, which is thematically in line with the immature and predictable tales these kids narrate each night. As with most Netflix entries, all 10 The Midnight Club episodes will be up for streaming on day one.

When: October 14
Where: Netflix

Things ended badly between Dimple Ahuja (Prajakta Koli) and Rishi Singh Shekhawat (Rohit Saraf) at the end of the first season — and at the start of the second, the two former lovers are finding solace in the arms of other people. Dimple is getting close with Harsh (Vihaan Samat), while Rishi falls for photographer Sanskriti (Sanjana Sarathy).

Meanwhile, Dimple is still — naturally — hung up on the source code of her app AntiSosh being leaked. She wants to find out who's behind it, but her professor Siddharth Sinha (Rannvijay Singha) is telling her to move on. Alongside, Mismatched season 2 is also promising a continuation of its LGBTQ+ themes, an exploration of mental health, and an augmented reality dance off.

All Mismatched season 2 episodes will be released at once on October 14.

Watch the Trailer for Mismatched Season 2

Charlie Hunnam (Sons of Anarchy) stars as a drug-addled fugitive from an Australian prison, who is out on the run in 1980s Bombay, in this 12-episode-long series. Based on the eponymous novel by Gregory David Roberts, Shantaram follows a desperate foreigner's journey, as he loses himself in the chaotic and unfamiliar Indian city, on a mission to seek purpose. Having sufficient experience with heroin and other substances, he reinvents himself as a doctor — thanks to a fake passport — a welcome sign in the downtrodden slums of Bombay.

As fate would have it, Hunnam's character Lin stumbles and falls in love with Karla (Antonia Desplat) who aims to uncover his secrets. In the book, she offers him roles in several Bollywood movies, as an extra, ultimately raising his ranks until he gets recruited by the criminal underworld, headed by Khader Khan (Alexander Siddig). Not a long-lasting relationship plan, is it? There are also mentions of him being fluent in Marathi, though we highly doubt seeing it in the show.

Apple acquired the rights to the book in 2018, after which they cast Radhika Apte (Sacred Games) to play Kavita Singh, an Indian journalist. However, plans seem to have changed now, with the studio opting for Sujaya Dasgupta (Shadow and Bone) instead.

Shantaram debuts with a three-episode premiere on October 14, while the remaining nine episodes will arrive one per week on Fridays through November 25.

When: October 21
Where: Amazon Prime Video

Westworld creators Lisa Joy and Jonathan Nolan are behind this new sci-fi series that follows Flynne Fisher (Chloë Grace Moretz), a woman in near-future small-town American who's pulled into a different world — a London with, is that giant marble statues?! — thanks to an experimental new virtual reality (VR) headset. Hey, I want one of those too!

But it seems like this isn't quite an escape for Fisher. For one, everything happening inside the “peripheral” — as they call it — is real. And two, this isn't a different world. This might be her world's future. As a character says in The Peripheral trailer, “it just hasn't happened yet.” Chased by all kinds of beings, Fisher must figure out how to survive.

Jack Reynor, Gary Carr, and Alexandra Billings are also part of The Peripheral cast. Scott B. Smith (Siberia) is the creator of the new Amazon series, adapting the first novel in William Gibson's unfinished Jackpot trilogy. (The second novel released in 2020. The third is due.)

Four years after it was first put in development, The Peripheral arrives on our screens. New episodes will release weekly through December 9.

Watch the Teaser Trailer for The Peripheral

When: October 25
Where: Netflix

Academy Award-winning director Guillermo del Toro is back at Netflix, with his new anthology horror series, Cabinet of Curiosities. Each of the eight episodes will feature a different director, with a special introduction from the man himself.

While not directing any of the episodes, del Toro has himself penned two of them — “Lot36” and “The Murmuring,” directed by Guillermo Navarro and Jennifer Kent, respectively. The remaining six tales are based on H.P. Lovecraft's works and other renowned horror writers. Ana Lily Amirpour (A Girl Walks Home Alone at Night), Panos Cosmatos (Mandy), Vincenzo Natali (Cube), and Catherine Hardwicke (Twilight) complete the list of directors for those episodes.

Netflix is releasing this series over a course of four nights, with two episodes streaming every day from Tuesday, October 25 through Friday, October 28.

When: October 31
Where: Disney+ Hotstar

Tanya McQuoid (Jennifer Coolidge) must have enjoyed her Hawaiian stay at The White Lotus, because she's off to another property — on Italy's famous island of Sicily — of the same titular resort group in the second season that will once again centre on the interactions between the staff and the privileged guests.

New The White Lotus season 2 episodes will drop every Monday on Disney+ Hotstar.

Kim Kardashian Agrees to Pay $1.26 Million to US SEC for Unlawful Crypto Promotion on Social Media