Inside Star Wars: The Bad Batch, The Clone Wars Spin-Off That’s a Bit Like The Mandalorian

Grizzled warriors and a child. Why break the formula if it works. 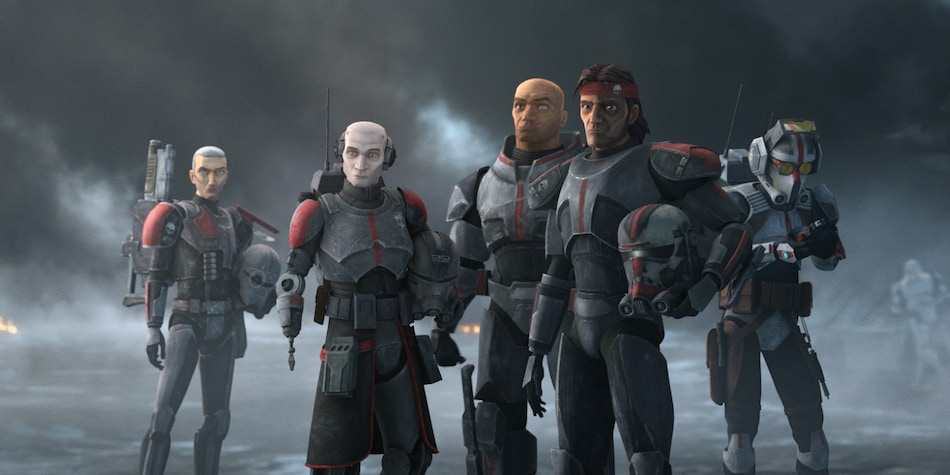 Star Wars: The Bad Batch, Lucasfilm's next animated series from a galaxy far, far away with , premieres on Disney+ and Disney+ Hotstar on Star Wars Day — that's May 4, as in “May the Fourth” be with you. The Clone Wars spin-off is set in the aftermath of the eponymous war and follows Clone Force 99, a group of elite clone troopers, each of whom have genetic mutations that grants them unique skills. The Bad Batch comes from Star Wars veteran Dave Filoni, who has previously worked on Star Wars: The Clone Wars, created Star Wars Rebels and Star Wars Resistance, and is now joint in-charge of the Star Wars cinematic universe with The Mandalorian creator Jon Favreau.

“We think of The Bad Batch as a spiritual successor to The Clone Wars,” Brad Rau, supervising director on The Bad Batch, told journalists over Zoom. “So there's a lot in common. When we start our first episode, we're backing up a little bit, timewise, from what we've seen at the very end of the Clone Wars. It's something that Dave Filoni wanted us to do. And it's really exciting to see how things come about, like Order 66. Having these characters that we only know a little bit about from the final season of The Clone Wars gives us an opportunity to carry on that legacy and storytelling of The Clone Wars, but through new characters' eyes.”

In the Star Wars galaxy, Order 66 refers to a Sith plot masterminded by Sith Lord Darth Sidious — better known as Emperor Palpatine — that saw behavioural modification biochips planted in the brains of all clone troopers deployed by the Republic. With the flick of a switch, Order 66 was executed. It termed all Jedi as traitors and their own clone trooper allies turned on them, slaughtering the Jedi Order in the process. Star Wars: The Bad Batch begins roughly around the same time and finds the titular group now working for the newfound Empire, as are all the other non-mutated clones.

From Toofaan to The Bad Batch, What to Watch in May

“That was one of the most exciting things for us to dive into with this series,” Jennifer Corbett, head writer on The Bad Batch, said. “When you talk about the end of the Clone Wars, what that actually looks like for not only Clone Force 99, but the clones in general. And what the galaxy looks like because it's not the Empire that everybody is so used to from the original trilogy and from Star Wars Rebels, where it was at the height of its dominance over the galaxy.

“It's the beginning stages of that. [The Bad Batch shows] what the galaxy is going through immediately when the war is over. How some planets and systems are happy the war's over and are embracing the Empire because of that. And others are a little bit wearier of the Empire and what their reign truly means. In terms of the Bad Batch, it was fun to sort of explore their feelings, because with the Republic, they were given a lot of freedom. But with the Empire. they run things a little differently, and we definitely wanted to show how the Batch reacts to that.”

“The Bad Batch again is an interesting point of view on that because they're not ‘regs',” Rau added, referring to regular clone troopers as regs. “Even the way they consider their brothers. We deal with how they are now on the opposite side in this growing Empire. The regs are suddenly the face of the enemy, just like we see in [Star Wars: Episode III –] Revenge of the Sith.”

Thanks to its setting and animation style, The Bad Batch feels a lot like The Clone Wars. But that's not the only Star Wars series that it resembles. The Bad Batch has elite warrior(s) who wear helmets in the lead. There's also a young girl Omega (voiced by Michelle Ang) in the mix, who ends up under the care of Hunter (Dee Bradley Baker), the Bad Batch's unofficial leader. In the early episodes — I've seen two — Hunter has trouble looking after Omega and even attempts to offload her to a family, because he believes she will have a safer life with them. This all sounds a lot like the current Star Wars hit The Mandalorian.

“I think what's connecting all of these shows, is the idea of change,” Corbett said when I asked her about the similarities. “And I see the similarities with The Mandalorian in terms of how he's taking on this new role. And that's very much what the Batch is doing. Now that everything has changed, they are questioning where they fit in and where they belong. Because the war is over, what is their purpose now, if not to be soldiers?

“And when you add a child into that mix, suddenly these elite soldiers who are used to being able to tackle any mission are completely fish out of water in terms of how to raise and be a guardian for a child. At least with Omega, she's older, she is her own person [as opposed to Grogu/ Baby Yoda]. And I think that the dynamic between them is so interesting because she's very different in how she was raised versus how they were raised.”

Rau thinks the similarities are down to the fact that virtually all Star Wars is about family. “Some of these similarities might feel more common [here] or at least they start more common,” Rau added. “Whether you're talking about grizzled warriors and a young girl, like we are in our show, or anything else around it, the sense of how a family works together as a military unit but more than that, just looking out for each other — [those] are themes that are really important in this show.”

Star Wars: The Bad Batch will also share a character with The Mandalorian — Fennec Shand (Ming-Na Wen), an elite mercenary introduced in the first season when Mando visited Tatooine. Shand was seemingly killed in that episode but she made a miraculous return in The Mandalorian season 2, revealing that Boba Fett had saved her. Shand would later help Fett take over the Hutt palace — which established The Book of Boba Fett spin-off series that will also include her. Given that The Mandalorian takes place after the fall of the Empire, The Bad Batch will feature a much younger Shand.

There are at least two more ties to the larger Star Wars cinematic universe on The Bad Batch. Resistance fighter Saw Gerrera (voiced by Andrew Kishino), introduced in The Clone Wars and later played by Forest Whitaker in Rogue One: A Star Wars Story, is also involved. And then there's Death Star commander Grand Moff Tarkin — or rather Admiral Tarkin (voiced by Stephen Stanton) on The Bad Batch, as he is yet to ascend the role made famous by Peter Cushing in the original 1977 Star Wars movie.

The Bad Batch, Out of Love, and More on Disney+ Hotstar in May

“Something we try to do is keep this show true to what Star Wars is at its core, and that's something that Dave Filoni is always teaching us and pressing upon us,” Corbett said. “In terms of like characters that we get to see, it's so tempting to want to use everybody, because we're all fans of Star Wars. So we want to play with all those toys. But it's a balancing act between why we use certain people, with also wanting to introduce everybody to new characters because it is a big galaxy. So we don't want it to feel too small. We want to get to explore other people's points of view and perspectives.”

Rau added: “When we do get a chance to get a character to fit into this storyline, I mean we freak out. It's so fun just talking about it, it's fun bringing it to life. So much effort was spent, technically, to honour the legacy of any character that we're familiar with. And that is not only from a casting perspective but the musical cues we use, the way it's animated, the lighting, the way that all comes together. But we do make sure that someone who doesn't know who that character is could still follow along. But if you do know who it is, you might cry, you might laugh, maybe both, all of that.”

Star Wars: The Bad Batch premieres May 4 on Disney+ and Disney+ Hotstar. It will debut with a 70-minute special episode. New episodes air Friday thereafter.