Trailer arrives for Netflix original movie ahead of Saturday world premiere at TIFF 2022. 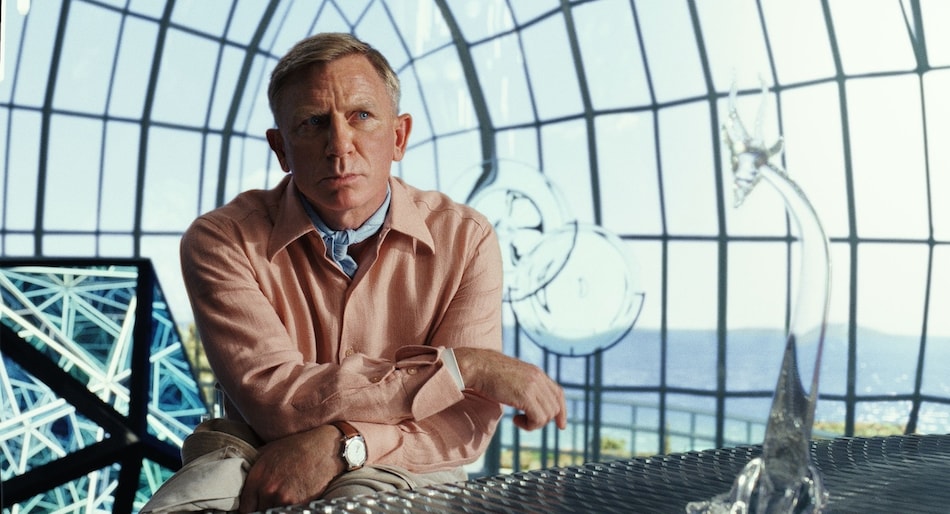 Daniel Craig in Glass Onion: A Knives Out Mystery

Glass Onion teaser trailer is here. On Thursday, Netflix unveiled the first trailer for the Knives Out sequel — its full mouthful of a title is Glass Onion: A Knives Out Mystery — which sends Daniel Craig's detective Benoit Blanc to Greece, where a tech billionaire (Edward Norton) has assembled “his nearest and dearest for a getaway on his private Greek island.” That includes the likes of Janelle Monáe, Kathryn Hahn, Leslie Odom Jr., Jessica Henwick, Madelyn Cline, Kate Hudson, and Dave Bautista. The release of the Glass Onion teaser trailer comes a day ahead of its world premiere at the 2022 Toronto International Film Festival.

“Ladies and gentlemen, you expected a mystery. You expected a puzzle. But for one person on this island, this is not a game,” Blanc (Craig) says in the first Glass Onion trailer. He's not only talking to the new characters, but in a way also to the audience. It's smart. What's also smart is how the intertitles add another meaning to Blanc's words. The release date/ period is teased after “ladies and gentlemen”, Hudson's character says “this is it” right after almost as if she's a viewer, and the words “to put the pieces together” appear after “a puzzle”.

“Will you explain it to us then, Detective?” Odom Jr.'s says after Blanc is done with his drawn-out tease. The Glass Onion teaser trailer's “explanation” comes in the way of showing off its ensemble cast — running us through all the big names — before Blanc's voice reappears: “Lock the doors. Stay in your rooms. Everyone is in danger.” The first Glass Onion trailer ends with breaking the fourth wall-ish line, as a guest asks: “Alright, when's the murder mystery start?”

Knives Out writer-director Rian Johnson returns in those capacities on Glass Onion: A Knives Out Mystery. Johnson is also a producer on Glass Onion alongside Ram Bergman, just as they were on Knives Out.

In an interview alongside the Glass Onion teaser trailer, Johnson said of his approach: “The phrase I kept coming back to and talking about the first movie is, ‘It's a roller coaster and not a crossword puzzle.' It's a common mistake in writing whodunits, thinking that you're making a crossword puzzle, and that the fun is that the audience is actually going to analyse all this and figure it out. I know when I'm reading or watching a whodunit, I always let go of the notion of figuring it out about a third of the way through it.”

“The reality is that what makes something successful is a story, and that's true of a whodunit as well,” Johnson added. “Are there characters that you care about? Are you pulled through emotionally? Are you on a ride with them with this story? Then the revelation of it all coming together and the whodunit, and the fact that it is all layered in there, is part of the fun of the genre. But, in a way, it can't be the spine that actually is supporting the body of the whole thing. You just need a good story.”

Glass Onion: A Knives Out Mystery is out December 23 on Netflix in India and around the world.

Glass Onion: A Knives Out Mystery