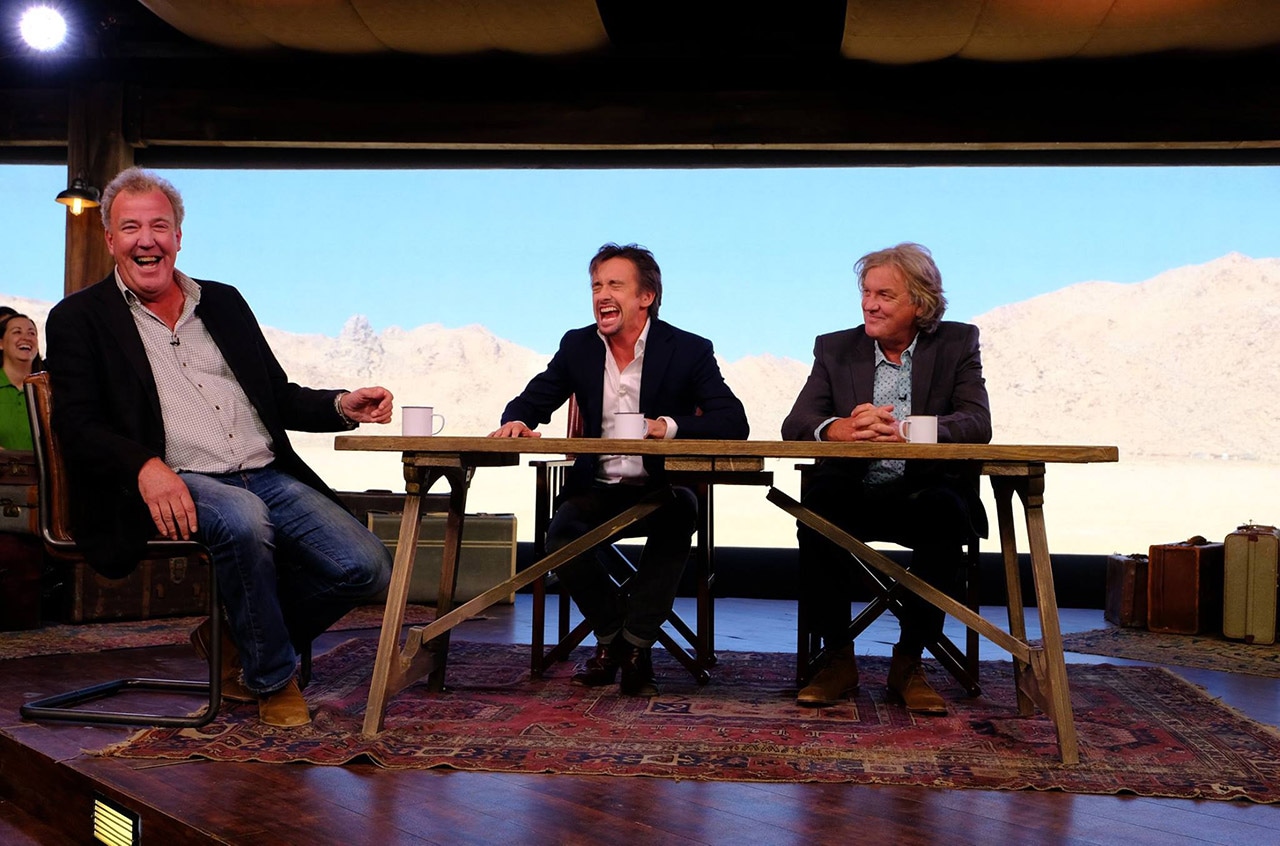 When Amazon announced back in July 2015 that it had managed to snap up ex-Top Gear trio Jeremy Clarkson, Richard Hammond, and James May on a three-year, 36-episode contract, many petrol-heads wondered how the new show was going to be different from the old one. After all, the trio hadn't willingly left BBC, but a change of scenery had been forced upon them after Clarkson infamously punched a producer.

Turns out, not a lot. Top Gear was never about their “tamed” always-helmeted racing driver The Stig, the famous test track that has appeared in multiple Forza Motorsport titles, or any of the show's segments. For all the intellectual property that had to be left behind with the British broadcaster, Amazon got the best of the lot – Clarkson, Hammond, and May. It's their genuine passion for motoring, mocking known and oft-repeated idiosyncrasies, revelling in their own stereotypes, and engaging in silly banter amongst themselves that made a car show involving three old blokes such fun to watch for over a decade.

And so when The Grand Tour gets down to business, it feels a lot like the old Top Gear. You know, before Chris Evans and Matt LeBlanc moved the show into the wrong gear. It doesn't start off like any motoring show though, but with a sequence that wouldn't be out of place in a big-budget Hollywood production. Clarkson is shown leaving an office building in London, then handing over his pass and setting off in a cab. The radio playing in the background talks about this being the end of the road for him, referring to his BBC contract not being renewed.

He arrives at the Heathrow airport, and checks into a flight for Los Angeles. When Clarkson emerges next, gone are the dreary grey skies of London. He gets into a blue Ford Mustang Rocket, and drives into the California sun off the parking lot, with a cover of Johnny Nash's 1972 hit I Can See Clearly Now serving as the soundtrack. The lyrics are almost fitting (“I can see clearly now the rain is gone” / “Gone are the dark clouds that had me blind”) and offer a peek into Clarkson's mindset post the Top Gear incident.

His mood uplifts as he spots something in his door mirror – it's May and Hammond in two different iterations of the Mustang. (And two other colours too, in white and red, completing the American flag.) Together they plough into the desert where a sea of vehicles joins them – in what can be best described as Mad Max minus the deaths – as they blast towards something unknown, which eventually turns out to be a thousand-strong congregation and a stage fit for rock stars. The event is called Burning Van, a riff on the annual Burning Man music festival, replete with a pirate ship, a vehicle modified to look like a scorpion, dancers, and a live band (it's the Irish outfit, Hothouse Flowers).

But as soon as the trio open their mouths, it's like the old days again. Clarkson jokes about May being a slow driver, who in turn jokes about Hammond being short, who in turn introduces Clarkson as “a shaved ape in a shirt”, while remarking how he's never been fired, technically. In the studio - the tent that'll serve as their mobile studio over the next few weeks, to be precise - the banter rolls on.

Clarkson notes that every word they use in America for cars is different from that in Britain. “And when I say different, I mean wrong”, he adds to laughter. Hammond concludes that the only thing the Brits and Americans agree on is the “steering wheel”. “But then they go and put it on the wrong side of the car,” he finishes.

Later in the episode, Clarkson dubs their new test track the “Eboladrome”, because its physical shape resembles the Ebola virus. Sure, it's silly humour but it's all part of the package when you ask for these three. And when he is surprised about the superior fuel-efficiency of a Porsche vehicle – Hammond notes it gives 94mpg to McLaren's 34 – Clarkson asks Hammond who owns Porsche (it's Volkswagen), and then strikes a pose to make his point. The implication is towards Dieselgate, aka the Volkswagen emissions scandal.

The off-kilter brand of humour continues into their celebrity segment. May wonders aloud that it's a shame they can't take the “Eboladrome” track with them around the world, otherwise they could keep “a score sheet of who was the fastest”. It's an obvious dig at their own ‘Star in a Reasonably Priced Car' segment at Top Gear, which was exactly that and they can't carry over to The Grand Tour for obvious (legal) reasons. And so, in a nonchalant fashion, both Hammond and Clarkson dismiss the attempt.

Even when they do introduce their new celebrity segment – it's called Celebrity Brain Crash – things take a turn for absurdist humour. Jeremy Renner jumps out of a plane to make “one hell of an entrance”, but never opens his parachute and 'dies' on impact. Clarkson says they had a backup in anticipation – it's Armie Hammer – but he too never makes it to the tent after a rattlesnake gets hold of him. A third guest, Carol Vorderman, is found passed out inside the tent.

Before all that, there's a faux-quarrel with the audience after Clarkson says the Royal Air Force is the best of its kind in the world, which involves the crowd chanting (U! S! A!), the three presenters hiding behind their table, and fake blood. And as always, there are throw-away comments everywhere – Clarkson calls driving a Porsche 918 as “being stuck in a Victorian woman's novel”, Hammond compares it to James Bond's way of ordering a martini, the camera pans to a sheep's genitalia when Clarkson wants to say the word “balls”, and so many more.

But beyond all that, there is also a genuine love for all things motoring – the science, the thrill of driving, and extensive testing. Clarkson remarks at the beginning that the three of them are car journalists, and this show – “contrary to what people are saying” – is a proper car show. “We have poured everything we know, everything we care about, into this show,” he adds.

Their focus is the first episode is to tick overdue boxes – chief of which has been their desire to pit the three greatest hypercars in today's world. Or The Holy Trinity, as Clarkson dubs it. That includes the McLaren P1, Porsche 918, and Ferrari LaFerrari. A big portion of the episode is thus spent at the Algarve International Circuit in Portugal, where the three indulge in a bit of reckless free roaming, repeated drag racing, and setting lap times with the help of Formula E driver Jérôme d'Ambrosio, all while they wax eloquent about the cars' performance.

Clarkson remarks that all three of those cars take “automotive science to a new level”, and make “the traditional supercar look wooden and old-fashioned”. Words like IPAS and DRS are shouted with child-like excitement, and May talks about the LaFerrari's Formula 1-style KERS system as something to behold. But at the same time, the trio understand their audience is much wider than petrol-heads, and make a genuine attempt to simplify things. The absence of anti-roll bars in McLaren P1 and lack of understeer in BMW M2 are explained in the simplest of terms, with Clarkson enjoying and laughing his way through.

It's the right mix of this dual approach – the love for motoring combined with a blend of humour helped greatly by the Clarkson-Hammond-May friendship – that made Top Gear the most widely watched nonfiction programme on the planet in 2012, despite their knack for getting into controversies time after time, be it casual racism towards Asians and Mexicans, appearing to say the n-word in an unaired segment (Clarkson maintains he muttered over it), or a Falklands War-hinting licence plate while filming in Argentina.

Clarkson, Hammond, and May made Top Gear, and The Grand Tour – despite its globe-tour format and higher budget – is basically the same show, which is to say it's essentially those three. Amazon, like Netflix, will never release viewership numbers, but with the show set to be available in over 200 countries and territories sometime next month, old Top Gear fans are in for a treat.

The Grand Tour is available on Amazon Video in the UK, US, Germany, Austria, and Japan. New episodes air Friday 12:01am GMT.