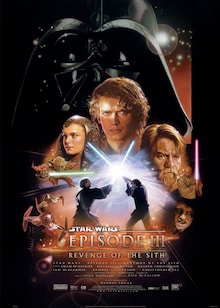 Star Wars: Revenge of the Sith

Star Wars: Episode III – Revenge of the Sith is the third and final part of the Star Wars prequel trilogy.

Palpatine is the Supreme Chancellor of the Galactic Republic — but he is secretly something else too. Suspicious stories about Chancellor Palpatine are running within the Jedi Council. Anakin Skywalker (Hayden Christensen) is asked to spy on the chancellor, but will he be able to resist the words that come out of Palpatine's mouth?

Meanwhile, Obi-Wan discovers a new threat as Anakin acts as a double agent between the Jedi Council and Palpatine, being lured into a sinister plan that'll help him rule the Galaxy.

Listen on
Star Wars: Revenge of the Sith Photos