Call of Duty: Warzone, Vanguard Season 4 Arrives on June 22: All You Need to Know

Call of Duty: Vanguard will introduce the popular Blueprint Gun Game next week. 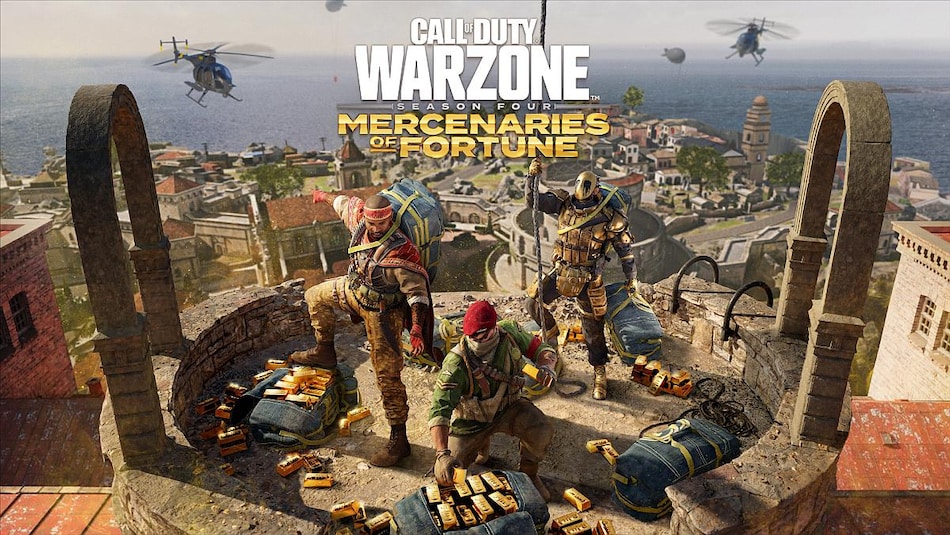 Call of Duty: Warzone and Call of Duty: Vanguard Season 4 is set to arrive on June 22, Activision announced on Thursday, while revealing the opening cinematic for the upcoming season titled Mercenaries of Fortune. Gamers will be offered new challenges, tools, objectives and features, according to Activision. Warzone is set to get a new map called Fortune's Keep, while Vanguard will let you fight on a battleship with the multiplayer map USS Texas 1945, or return to Shi No Numa and jump into the classic round-based Zombies mode.

When the update to Call of Duty: Vanguard Season 4 arrives, gamers will have access to a new map called the USS Texas 1945. You will be able to engage in battle on the high seas aboard the interior spaces and on the deck of the ship. Another map, called Desolation, will arrive midway through the season.

While season 3 of Call of Duty: Vanguard practically abandoned Zombies, the classic round-based mode is back, and you can wade through the swamps of Shi No Numa, along with a new multi-step main quest, Wonder Weapon. Shi No Numa will also feature a zipline system, according to Activision.

The classic turn-based Zombies mode is back in Shi No Numa on Call of Duty: Vanguard
Photo Credit: Activision

The popular Blueprint Gun Game will also make its debut in Call of Duty: Vanguard Season 4, where gamers must eliminate an enemy to cycle through to the next weapon — there are 18 in total — to win the match. You can also use a melee attack on an enemy to set them back one weapon, while using the final Throwing Knife elimination to win.

On the other hand, Call of Duty: Warzone Season 4 brings a new map called Fortune's Keep, set on an island. An original Resurgence battle royale map created by High Moon Studios, Fortune's Keep is the same size as Rebirth Island, and features four points of interest (POI) — Smuggler's Cove, the Keep, the Winery, and the Town Center.

Fortune's Keep will also feature a Black Market Run Contract that will grant off-market loot — including the Sequencer Grenade, the Nebula V Minigun, Foresight, a Specialist Bonus — upon completing the challenge to reach the Black Market Buy Station in time. Ambushing mercenaries who are attempting to airlift their cash off Fortune's Keep will grant access to their bag of goods. You will now have access to Fortune's Keep, Rebirth Island, and Caldera via weekly playlist rotations in Call of Duty: Warzone Season 4.

The Caldera map is also getting updates in the form of a new POI called Storage Town — a complex of lockers with Contracts and item spawns. After a drought in Caldera, over a dozen POI changes will be made to the map. Mercenary Vaults can also be found across the island, according to Activision. New additions to Warzone Season 4 include the Armored SUV with a rooftop turret and nitrous boost, ATMs for a major cash boost, and an EMP grenade to disable vehicles and HUD information,

With the upcoming Warzone Season 4, gamers will have access to new operators Captain Butcher and Special Operations Task Force trainer Callum Hendry. Two new powerful armaments are coming to the game in the form of the highly mobile Marco 5 and the suppressive UGM-8. You will also gain access to the Vargo S mid-season, according to the publisher.