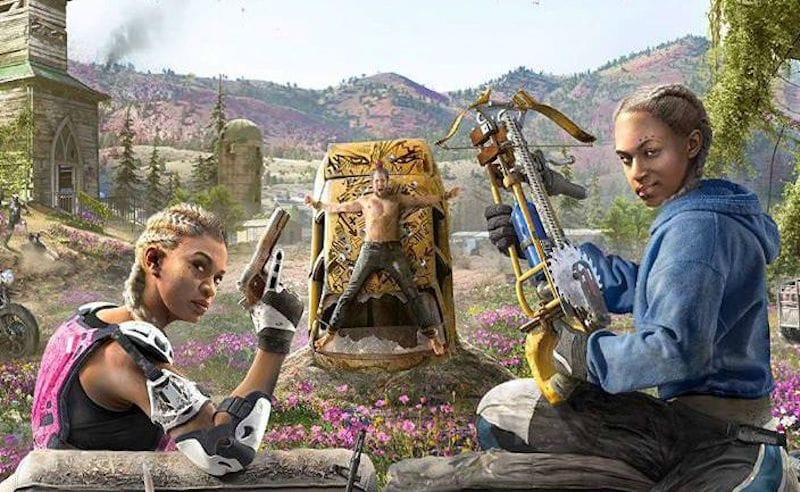 Far Cry New Dawn is the sequel to last year's entertaining Far Cry 5, and just like that game, it's an open-world, first-person shooter, that takes place in the fictitious Hope County. The big difference however, is that it's set 17 years after the events that saw a nuclear bomb dropped at the end of0 Far Cry 5. However, Far Cry New Dawn's take on the post-apocalyptic is far from what we've seen in the likes of Fallout 4 or Metro Exodus. Instead of a decaying, ruined world, we're treated to lush environs with nature reclaiming the area, giving it a vivid colour palette. Is there more to Far Cry New Dawn? Let's find out.

Despite being a sequel to Far Cry 5, you don't play as the protagonist from the last game. Instead, you're another nameless character with no voice or backstory though you can customise your appearance in terms of skin, hair, and attire. This shows up in-game when you decide to delve into its photo mode. You're the head of security for Thomas Rush, an ex-military man going around the US helping communities rebuild the society after the large-scale destruction. On responding to call for assistance from Hope County, you reach there to find most of your crew wiped out and Thomas Rush kidnapped by a group of bandits known as the Highwaymen. It's at this point when you're introduced to the game's villains, the twins Mickey and Lou.

Unlike past games, the villains in Far Cry New Dawn far from memorable, lacking the charisma of Far Cry 5's Joseph Seed, the flamboyancy of Far Cry 4's Pagan Min, or the sheer insanity of Vaas from Far Cry 3.  In fact, the twins' presence is barely felt outside of the game's opening and closing sections. Far Cry New Dawn may have doubled down on its villains in Mickey and Lou, but they're uninteresting and dull compared to those from past games.

Thankfully, the combat is solid. Gunplay is responsive and smooth. There's a large number of pistols, rifles, shotguns, and sniper riles, in addition to Molotov cocktails and grenades. In spite of Ubisoft waxing eloquent on how weapons would be personalised and unique due to the post-apocalyptic setting, there's little variance between Far Cry New Dawn's many guns feel and what we experienced in Far Cry 5. They're nowhere close to the kick and feedback you'd expect from a game in which modern mass-produced weapons don't exist. A couple of exceptions such as the saw launcher that lets you ricochet buzzsaws off walls exist, but by and large, Far Cry New Dawn's arsenal is pedestrian.

However, this dissonance between Far Cry New Dawn's setting and gameplay isn't restricted to its guns. Through your time with the game, you'll find yourself scavenging for resources such as plants, animal skins, and ethanol, which is used to power outposts and vehicles. Although there's no sense of urgency or threat to your survival given how overabundant these resources are, which makes the post-apocalyptic setting seem a tad fake. This further extends to the fact that your starting base of operations resembles a fully furnished lodge rather than the headquarters for a group of understaffed and underpowered civilians.

That said, there are some wrinkles to the Far Cry 5 formula such as the fact that you don't start Far Cry New Dawn in the middle of Hope County's sprawling map. Instead, you work your way from the bottom to the top, recruiting allies, claiming mission critical resources, and laying waste to bandits aplenty. The further you move away from the base of operations, the higher the health and strength further of your x. The only way to tackle them is to upgrade your weapons. It adds a layer of strategy and deliberation to the proceedings as you'll need to do this so often as you can't explore and approach any objective as you saw fit without making sure your guns are upgraded. With that said, it can also make it feel like a chore if you don't play it the way the developers intended. A jarring change when you consider the sheer freedom in gameplay Far Cry 5 delivered.

Then there are Expeditions. They're missions that have you stealing rare gear from locations across the US such as Alcatraz and an amusement park complete with a ferris wheel. Each of them are expertly designed and end with you evacuating the vicinity in a helicopter complete with flight combat sequences that grant you more loot for taking down enemies. Far Cry New Dawn's Expeditions are neat additions that keep the game fresh and flesh out its world better than Hope County could on its own.

As it stands, Far Cry New Dawn feels like it's playing it too safe in areas like its weaponry, while taking some interesting risks with its progression system that don't entirely pay off. Throw in less than memorable antagonists and you have an entry that just about warrants its budget price tag of Rs. 2,499 ($40 in the US). That is until you realise that Far Cry 5 is the same price right now. So unless you're a massive Far Cry fan that's seen everything Far Cry 5 has to offer, we'd recommend holding off before jumping into Hope County again in Far Cry New Dawn.