God of War is back after four-and-a-half years — and it’s great. 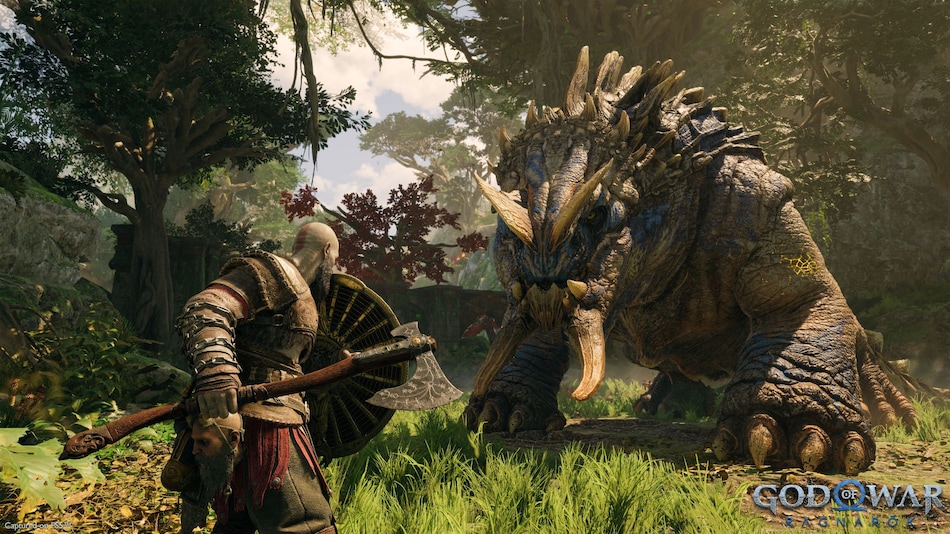 Kratos has his work cut out before Ragnarök happens

God of War Ragnarök — out November 9 on PS4 and PS5 — has a mighty task on its hands. How do you follow up a critically-acclaimed and universally-loved soft reboot that reinvigorated the franchise? With 2018's God of War, Santa Monica Studio not only transported its Greek demigod Kratos to Norse mythology, but reimagined some fundamental aspects of the series along the way. Its director Cory Barlog faced pushback from both Sony and within the team. But it delivered, in spades. That success means a lot is riding on Ragnarök, which has the additional task of wrapping up God of War's Nordic era. (That's appropriate. After all, Ragnarök leads to the end of days. Next time you see Kratos, he might pop up in Mayan or Egyptian mythology, as has previously been hinted.)

But back to the question at hand. The answer is simple: if it's not broken, don't fix it. God of War Ragnarök either retains or builds on the foundation laid by its predecessor. It's as cinematic as before, told in a deceptive one-shot that never cuts away. That illusion is broken whenever Kratos travels through portals, which is part of how Ragnarök hides its loading screens. (It's also got unnecessary long tunnels, rocks you need to squeeze between, or places you need to crouch around.) The immersive cinematography is married with writing (Matt Sophos and Richard Gaubert) and direction (Eric Williams) that's mostly very good. It feels like a movie. In fact, the Ragnarök cutscenes were so engaging at times that I didn't want them to end, because then I would have to play.

This is an issue with the medium itself. Because video games have to give players something to do — not just for a few minutes, but hours and hours. More so for AAA titles that must “earn” their price tag — their stories nearly always suffer as a result. That happens in God of War Ragnarök too. That said, it seems foolish to complain when the playing is as enjoyable as it is here. Ragnarök retains the frenetic, satisfying, and at times comical combat of 2018's God of War, though the camera continues to be tighter than many would prefer. It builds on what we've seen with a couple of new moves and mechanics, and allows Kratos' now-teenage son Atreus to be a more active participant.

God of War Ragnarök to Call of Duty Warzone 2.0, the Biggest Games in November

The biggest change in attack is the use of the triangle button, be it on the DualSense (for PS5) or DualShock 4 (with PS4). In the 2018 God of War, the triangle button was used to equip or recall the Leviathan Axe. But if you already had the axe in your hand, the triangle button did nothing. In God of War Ragnarök, holding down the triangle button covers the axe with frost. Your next melee or ranged attack — R1 or R2, respectively, on both PlayStation controllers — will then deliver an additional chill to your enemies. You can do something similar with the Blades of Chaos, Kratos' signature weapon in the Greek era, which is now available from the start on Ragnarök. Except instead of frost, the effect is naturally fiery.

These abilities are part of God of War Ragnarök's skill tree, where you can spend XP — earned by completing objectives — to teach Kratos and Atreus a variety of skills, spanning melee, ranged, technique, and instinct talents. As you make use of these new skills, you will unlock new tiers, going from bronze to silver to gold. Each time you level up, you can choose how to improve said ability. Even though there's a decent amount of choice baked into Ragnarök, I found the tier system to be interesting. Character growth is defined, in some ways, by your play style, and not just arbitrary assignment of earned XP. To be fair, that does exist, but how you approach combat is equally valuable. If you prefer one weapon or attack a lot, that will become more powerful than the rest of your tools.

While many of the abilities improve the versatility of your weapons, that's not the only way to upgrade them. There's the standard method: you earn XP and gather resources as you play, and you use them to boost weapon quality and strength. Additionally, you can also slot in runes — granted after you defeat mini-bosses — for elemental effects. Both weapons, be it the axe or the blades, offer a light and heavy runic attack in God of War Ragnarök. They are great for crowd control and dealing extra damage, though you do need to be wary of their cooldown timers.

Gotham Knights Review: This Is Not Your Daddy's Gotham

Weapons aid in traversal too on Ragnarök. The Blades of Chaos function as grappling hooks — these are the most ubiquitous tool in modern-day gaming — allowing you to climb to places you couldn't otherwise, interact with objects that help unlock loot or new areas, or even just latch onto enemies to wreak havoc. Additionally, Kratos' movement can aid in combat. In God of War Ragnarök, you can sprint off cliffs and slam into enemies below, dealing damage to them and those in their vicinity.

What I love about combat in God of War Ragnarök is that it's a lesson in how you can do more with less. There are just two weapons here — the axe and the blades — but still such a variety of play. You can charge your weapons with frost or fire, hold down buttons to trigger special combos, and of course, line up attacks in a coordinated fashion to maximise damage dealt.

What I don't love is how the game limits what you can see. Enemies get free shots in God of War Ragnarök simply because the camera won't let you see them. And the way Kratos dodges attacks isn't always natural. Moreover, while you can command your companions — be it Atreus or someone else — to help you in combat, it feels very limited in the heat of battle. In most cases, the companions only help you with the enemy you're already focusing on, or the ones in your field of view. They will rarely attack anyone who's not in your vision, leaving them wide open to strike at you.

Moreover, God of War Ragnarök is all about old-school level game design. The enemies that routinely pop out of the ground are meaningless fodder — they only exist to help you level up for the story baddies. This is also true of some mini-bosses who show up out of the blue to help you gain XP. Without a narrative purpose to it, it feels like combat exists for combat's sake at times.

Ragnarök brings the God of War franchise to Sony's flagship console — natively — for the first time. While the 2018 God of War was granted a PlayStation 5 patch in early 2021, boosting its fidelity and performance to a smooth 4K 60fps, Ragnarök is the series' first true release on Sony's flagship gaming console.

You can do 4K 30fps for best visuals, 60fps and dynamic resolution for more performance, or even 120fps if your TV is capable of that. And if you're on the PS5, all without any fan noise that we had with God of War on the PS4.

I only played Ragnarök on a PS5, as I don't have a PS4 or PS4 Pro with me, so I can't speak to graphics and performance on older Sony consoles.

There are times when God of War Ragnarök feels like a loot simulator. It's clear that most maps are designed to allow Ragnarök to place chests in strategic spots. Some of the loot is tied to environmental puzzles that I largely enjoyed. But the loot is also left out in the open in many cases. Characters will even at times remark how you love to break objects, and break away from the primary objective at hand. But the fourth-wall-breaking nature of it can't take away from the mundaneness of it. That said, it's nowhere as annoying as the approach other games have taken, some from the house of PlayStation itself.

It helps that you're immediately pulled into the narrative, with characters easy to admire and root for. God of War Ragnarök is a coming-of-age story for the naive teenage Atreus, who is a big advocate for being more involved in the affairs of gods. And it falls to the protective Kratos — who's seen a lot more of the brutal world — to shield him from the dangers of the nine realms. At the same time, Atreus wants to learn more about who he is. But is he charting his own path in life, or is he merely fulfilling prophecies by learning more about them?

Even when the story is not progressing in God of War Ragnarök, the dynamic and exchanges between Kratos, Atreus, and the severed head of Mimir serve you well. The dry humour borne out of the father-son duo's conflicting personalities — Kratos' curtness and sincerity, and Atreus' nagging and inquisitive nature — is still here. If anything, it's expanded because Atreus is less afraid to express himself now.

And now that Atreus is a little grown up, he can have adventures on his own. (Without telling his father mostly.) There's a lot to do and explore here, with God of War Ragnarök taking you across all nine realms of Norse mythology this time around — be it the exquisite beauty of Svartalfheim, the icy embrace of Niflheim, or the eeriness of Alfheim. In fact, there's so much that Ragnarök feels like two games in one as you push deeper in. I'm not alone in that sentiment. The developers felt the same way, and even considered splitting God of War Ragnarök into two games, as its scope became much larger than they had originally planned.

It would have turned God of War's Nordic era into a trilogy, which is always an alluring prospect. But they didn't want to spend 15 years telling one story — what with both the 2018 God of War and Ragnarök having taken five years apiece. And hence, God of War Ragnarök is both the second and third chapter, in a way, if it were a trilogy. It sends you across the nine realms in the hunt for identity and a desire to stave off war, as you deal with quests for vengeance, and battle a series of monsters of all sizes, armed with a bunch of new tools and combat techniques. All of it set against the backdrop of the end of days.