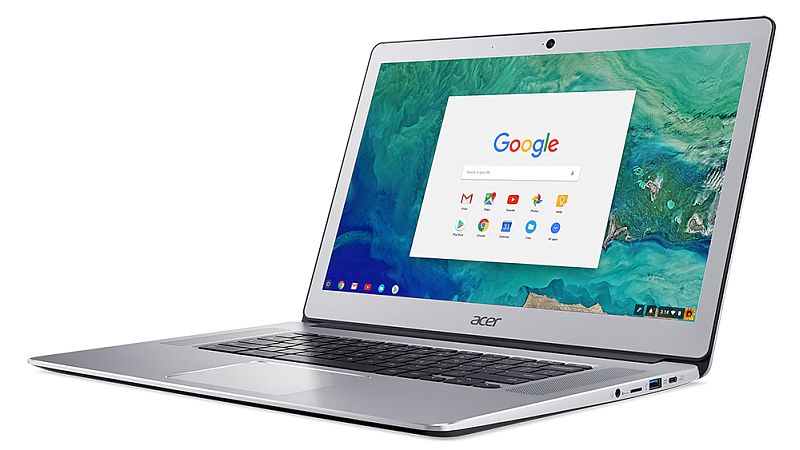 It will be available in EMEA (Europe, the Middle East, and Africa) in October starting at EUR 499 (roughly Rs. 38,000). It will also be available in North America in October starting at $399 (roughly Rs. 25,500), including the United States, where it will be offered at Best Buy and the Acer Store. The company claims up to 12 hours of battery life and the new Chromebook will support Android apps via Google Play when it is launched. It will be available in configurations of dual-core Intel Celeron and quad-core Intel Pentium processors available with 32GB or 64GB of storage as well as 4GB or 8GB of RAM. It features a backlit keyboard and weighs 1.72kg while measures 378x256x18.9mm. Connectivity options include Intel Wireless-AC (802.11ac) wireless featuring 2x2 MIMO technology; two USB 3.1 Type-C ports; Bluetooth 4.2; two USB 3.0, and an HDMI port.

The new Swift 5 is said to offer stylish portability alongside capable performance. It weighs less than 1kg, and is built with ultra-light magnesium-lithium and magnesium-aluminium alloys. The laptop is powered by eighth generation Intel Core processors, and is said to deliver up to 8 hours of battery life. It has a full-HD IPS touchscreen display, and a backlit keyboard.

The Spin 5 convertible laptop on the other hand has a rotating display like others in its series, letting users switch between laptop, tablet, display and tent form factors. The 13-inch model weighs 1.5kg and is at 15.9mm thin, while the 15-inch model is is just over 2kg and 17.9mm thin. They both ship with eighth generation Intel Core processors, up to 16 GB of DDR4 RAM, and even a discrete Nvidia GeForce GTX 1050 graphics.

Acer also revealed its new Nitro 5 Spin convertible laptop targeted at gaming enthusiasts. It starts at $799 and will be going on sale from September. It comes in two display sizes including 13-inch and 15-inch sizes. It is powered by Intel's 8th generation processor offering up to 16GB of RAM.

Acer Predator Orion 9000 series features a black-and-silver spacecraft-like exterior with customisable RGB lighting along the sides of the front bezel. The device comes with two handles and wheels covered with a carbon fiber pattern. Acer says that "the new rigs can be easily moved from one location to another." It also features liquid cooling and Acer's IceTunnel 2.0 to keep the temperature down. The series come with support of up to 4 Radeon RX Vega cards for high resolution in stereo and refresh rates. Gamers will also get option of two Nvidia GeForce GTX 1080Ti cards in SLI, which support virtual reality with ease. The Predator Orion 9000 will come with Intel Core i9 Extreme Edition 18-core processor and up to 128GB quad-channel DDR4 memory.

The Predator X35 monitor, on the other hand, offers a colour gamut covering 90 percent of the DCI-P3 colour standard and supports 4ms response time, and high 200Hz refresh rate combined with Nvidia G-Sync for smooth gameplay.  It sports a large 35-inch display with 21:9 aspect ratio with a WQHD (3440x1440) pixels  resolution. It comes with Acer HDR Ultra and Quantum Dot technology.

Acer Aspire S24
Apart from launching the new Predator series and Chromebook 15, the company also revealed its all-new 23.8-inch Aspire S24 all-in-one desktop PC. Powered by Windows 10, Acer Aspire 24 is being marketed as the company's "slimmest ever" featuring a display with a side profile of only 5.97mm. Under the hood, the all-in-one packs Intel's 8th Generation Core processors with optional Intel Optane memory with Intel Dual Band Wireless-AC (802.11ac 2x2 MIMO) technology.

Running Windows 10, Aspire 24 offers Cortana and Microsoft Edge features. It comes with up to 256GB SSD and 2TB HDD of storage space. The Acer Aspire S24 will be available in North America starting January starting at $999 and in EMEA from November this year at EUR 999.

Acer's new 360-degree cameras
Acer on Wednesday also announced two LTE-connected 360-degree cameras including the Holo360 all-in-one camera that allows users to capture, view, edit and share with just one device, and the Vision360 cloud-connected in-car camera. The Acer Holo360 is powered by a Qualcomm Snapdragon 625 mobile processor with Qualcomm's Connected Camera platform. It supports capabilities such as stitching videos in real-time, comes with integrated LTE connectivity, and a 3-inch touchscreen for operation. The Acer Holo360 offers an all-in-one solution to livestream 360-degree videos. The Holo360 runs on Android 7.1 Nougat which allows users to share 360-degree photos and videos directly to social networks.

Acer Vision360, on the other hand, is a cloud-connected 360-degree camera with use of two "ultra-high quality cameras." The Acer Vision360 can be used in cars for recording all angles around the car in 4K quality video.

Additionally, when an object collides with the car when it is in motion; the device triggers a recording that includes GPS coordinates of where the incident occurred, which is not only saved in a secure area on the device's internal storage, but also uploaded to the cloud for evidence preservation. Apart from the camera, the Vision360 is mounted on the windshield, aligned with the driver's eyes and also displays the vehicle's current speed. The Acer Holo360 connected camera will be available in North America from November at $429 (roughly Rs. 27,500) bundled with a water-resistant case.

Projectors
Acer also unveiled two new projectors including the Acer VL7860 catering to the home cinema enthusiast, and the Acer P8800, for top-notch image quality for public venues or larger rooms. Pricing and availability details of the new projectors were not shared by Acer at the event.

The company also showcased Pawbo Munch, which is a smart treat-dispenser that works with the Pawbo+ allowing pet owners to interact with their pets, whether at home or from afar. No pricing was announced for the products at the event.