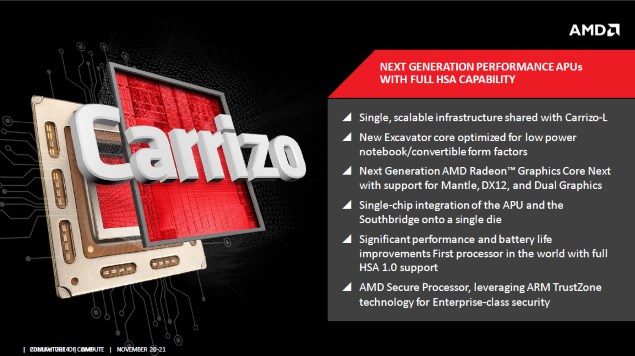 AMD has launched its sixth-generation A-Series APU line, codenamed Carrizo, at an event alongside the 2015 Computex trade show in Taipei, Taiwan. AMD will be targeting mainstream notebooks with the promise of extended battery life, as part of its efforts to claw itself out of the low-margin budget ends of the PC and notebook markets.

Carrizo will be the company's first SoC (System-on-a-Chip) design, integrating functions including CPU cores, GPU cores, cache memory, IO controllers, a hardware HEVC video decoder, a security core, and other functions on a single processor die. The architecture is also the first to be compliant with AMD's industry-spanning Heterogeneous Systems Architecture (HSA) effort, which aims to drastically improve performance by allowing a system's CPU and GPU to contribute to workloads more easily through a common memory pool, rather than repeatedly copying data from one dedicated memory pool to another.

Carrizo's four CPU cores are based on the new Excavator architecture, and are accompanied by eight GPU modules based on the Graphics Core Next 1.2 architecture derived from the company's discrete Radeon GPU line. The integrated GPU is DirectX 12 ready and discrete graphics chips are supported as well. The chip is fabricated on the relatively old 28nm process but AMD says its engineers have been able to squeeze more efficiency out of their designs, and Carrizo thus stays within a 15W TDP envelope.

According to AMD, the mainstream notebook segment accounts for two out of every five notebooks sold, and is the largest share of the overall PC market as well. Intel has dominated this market for years and AMD has been forced to compete by cutting prices. The company has identified workloads that users typically expect their computers to be good at today, such as video streaming and online gaming.

The HEVC block is an example of measures taken to perform these tasks while still lasting all day on a single battery charge. AMD claims over twice as much video playback time on a Carrizo APU than on its predecessor, Kaveri, thanks to decreased CPU core utilisation.

The security core, which AMD calls TrustZone, is actually an ARM Cortex-A5 which enables secure boot and resume, network connectivity while in sleep mode, drive encryption, and application security - all of which will appeal to business customers.