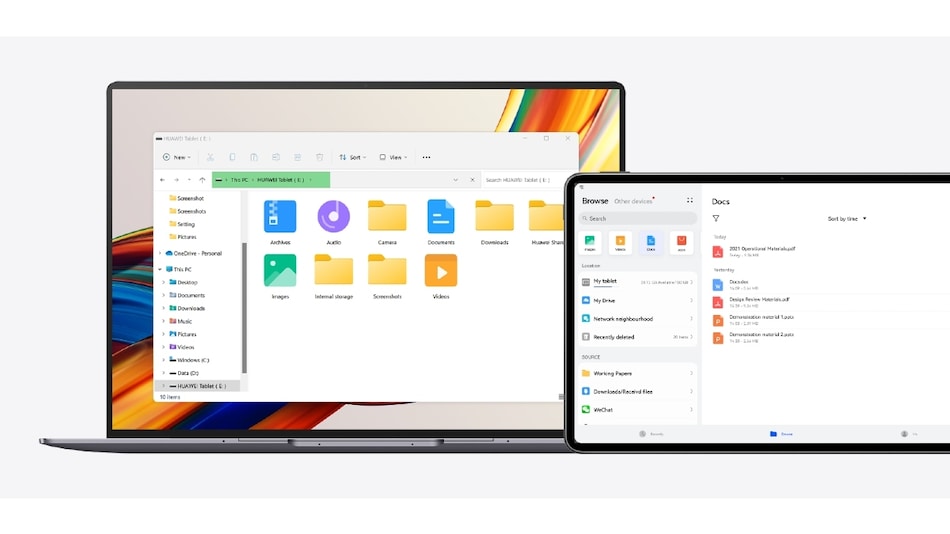 Both the Huawei laptops come with Wi-Fi 6, and Bluetooth v5.1

Huawei MateBook X Pro 2022 sports a 14.2-inch LTPS display with 3,120x2,080 pixels resolution, a 3:2 aspect ratio, and up to 90Hz refresh rate. The display provides a screen-to-body-ratio of 92.5 percent, a 178-degree viewing angle, 500 nits of peak brightness along with a bunch of display-related features such as Smart Brightness Feature. Under the hood, the laptop comes with an 11th Gen Intel Core i7-1195G7 processor, which is paired with 16GB of LPDDR4x RAM and 1TB of NVMe PCIe SSD. The laptop features Intel Iris Xe integrated graphics.

Huawei MateBook X Pro 2022 features a Shark Fin Fan Cooling System that features slim VC heat dissipation modules, triple air intake, and a smart temperature control system. There is a trackpad with the Huawei Free Touch feature. The trackpad has 100 percent detection coverage, Huawei says, and supports six gestures, including a knuckle-tap to take screenshots and swipe to adjust the volume. The laptop features a full-size keyboard and the keys have 1.5-mm key travel. The Huawei laptop also gets multi-level keyboard backlighting adjustment.

Huawei MateBook X Pro sports six speakers in a split-frequency setup. They use Huawei Sound technology to produce surround sound. There are four microphones and an HD (720p) web camera. Huawei says that the laptop gets a "large-capacity battery" that comes with a 90W charger. As per the company, its fast charging technology is claimed to deliver up to 3 hours of runtime with 15 minutes of charging. Connectivity options on the laptop include dual-band Wi-Fi 6, Bluetooth v5.1, and four USB Type-C ports. There is also a 3.5mm headset and microphone 2-in-1 jack. The laptop also comes with a fingerprint sensor and face recognition for biometric security.

Huawei MateBook E features a 12.6-inch OLED display with a 16:10 aspect ratio, and a 2,560x1,600 pixels resolution. It is claimed to deliver 600 nits of peak brightness and 10-point touch support. Under the hood, the laptop comes equipped with up to 11th Gen Intel Core i7 processors along with up to 16GB of LPDDR4x RAM and up to 512GB of NVMe PCIe SSD. The laptop can be equipped with Intel UHD Graphics or Intel Iris X3 Graphics.

Aimed at content creators, the Huawei MateBook E can be paired with Huawei M-Pencil (2nd generation) that has 4,096 levels of pressure sensitivity and up to 10 hours of sketching on a single charge, as well as Huawei Smart Magnetic keyboard. Huawei says that the 2-in-1 laptop comes with a 360-degree integrated floating design. It is said to have "cooling vents, speakers, and microphones in one port for a cleaner layout."

Huawei MateBook E comes with a 13-megapixel rear camera and an 8-megapixel front camera. There are four speakers with surround sound and an equal number of microphones. There is a large battery that can be charged 54 percent in 30 minutes, and fully juiced up in 90 minutes with the bundled 65W charger, according to Huawei. Connectivity options include Wi-Fi 6, and Bluetooth v5.1. Ports on the laptop include a USB Type-C port, a Thunderbolt 4 port, and a 3.5mm headset and microphone combo. You also get a fingerprint sensor.