Microsoft has completely updated the UI of the new Notepad. 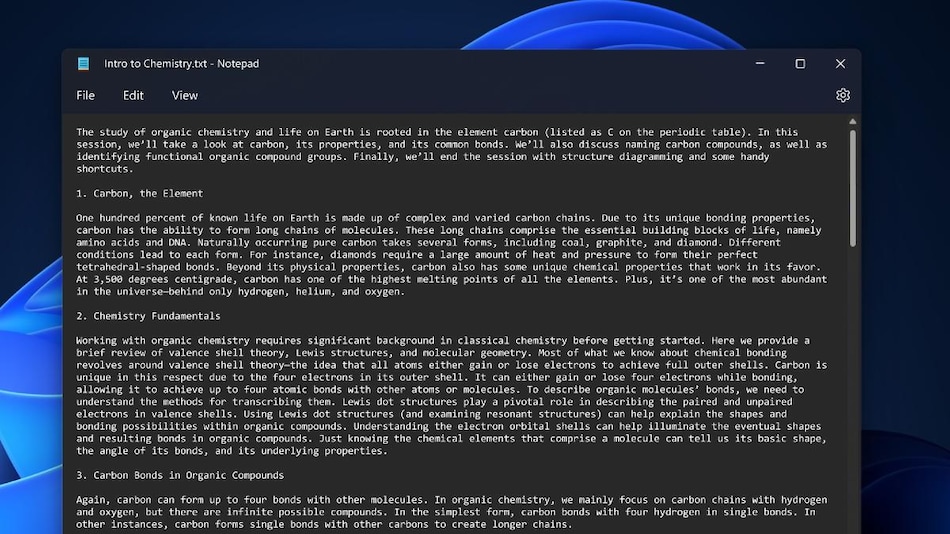 Microsoft has rolled out a redesigned version of Notepad for Windows 11. It is a test build that is, as of now, only available to Windows Insiders that are part of the Dev Channel. The new Notepad sports a completely overhauled UI. The app now features rounded corners, Mica material, and other tweaks to align with the visual design of Windows 11. Microsoft states that the introduced changes are aimed at providing a "modern spin on the classic app" with improved functionality.

The highlight of this version is the newly introduced Dark Mode for Notepad. This feature was added after Microsoft noticed the ‘demand from the community'. This version of Notepad is designed to adapt to the system's theme preference by default. Users can activate the Dark Mode feature through the newly-introduced Settings page. Additionally, the font options have also been moved to this page. Notepad's ‘find and replace' option has been redesigned for an improved workflow. Another welcomed addition is the multi-level undo feature. In previous versions, the undo feature allowed users to go back only one step.

Microsoft has mentioned in its blog that they are aware of several issues in this preview version of Notepad. Users are expected to face some bugs when trying to switch between different input languages or when using Japanese IME. Microsoft is also aiming to improve Notepad's performance when users open very large files.

The Windows Insider program was announced by Microsoft in 2014. It allows people who own Windows 10, Windows 11, and Windows Server licensee to gain access to pre-release builds of operating systems and applications. The program now has millions of users that engage with Microsoft engineers to provide them with valuable feedback. Its platform features three channels – Dev, Beta, and Release Preview. The Dev Channel, where this version of Notepad is released, provides highly technical users access to new and unstable builds.