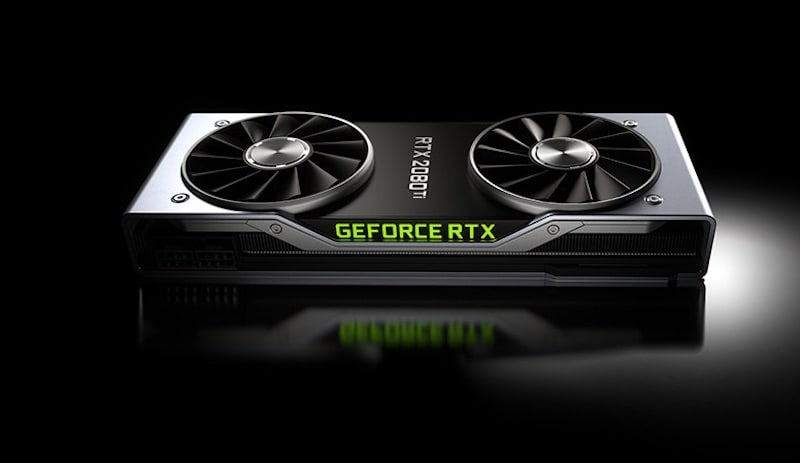 At Gamescom 2018 last week, Nvidia lifted the lid on the Nvidia GeForce RTX 2080 Ti, GeForce RTX 2080, and GeForce RTX 2070 with a release date of September 20. The GeForce RTX series is based on an architecture codenamed Turing that merges conventional graphics rasterisation, real-time ray tracing, AI, and compute power for the first time.

Nvidia claims that Turing delivers up to 6X the performance of the previous-generation 10-Series GPUs. Gamers will be able to play the most recent and upcoming titles in 4K with HDR at frame rates exceeding 60fps.

The GeForce RTX series GPUs feature new hardware called RT cores. These allow hardware acceleration of light rays in real time, which has never been possible before with consumer-grade silicon. The possibilities include deferred shading, and real-time transparency and translucency effects with objects in motion, allowing for shadows and light to behave more realistically. All this means that gamers will be able to see reflections of things like explosions that aren't even happening on screen. In theory, this should result in better looking games with a greater sense of fluidity and immersion, which might seem like a breath of fresh air following two years of the Nvidia GeForce 10-series GPUs. However, there are a bunch of reasons why this may not be the graphics upgrade you're looking for or need right now, starting with the price.

Suffice it to say, the Nvidia GeForce RTX series doesn't come cheap, with some of these graphics cards costing as much as an entire gaming rig. It doesn't help matters that Nvidia hasn't dropped prices on the 10-series in India just yet. With that said, it’s worth pointing out Nvidia has changed what Founders Edition cards are this generation with them having improved cooling and build quality compared to 10-Series Founders Edition cards.

Nvidia GeForce RTX frame rate and resolution
Alright, suppose you buy into the hype of Nvidia's performance graphs, claiming that the Nvidia GeForce RTX delivers double the performance of last generation's flagship, even though those numbers come with fancy jargon and fine print aplenty. Slick features like real-time ray tracing and deep learning supersampling (DLSS) will require game developers to support them natively. What this means is that the performance will differ from game to game. And if Nvidia's Gamescom 2018 previews for Battlefield V and Shadow of the Tomb Raider -- two high-profile games supporting the Nvidia GeForce RTX series right now -- are any indication, prepare for disappointment. Early tests conducted by other websites show that neither game hit 60fps with ray tracing enabled at 1080p on an Nvidia GeForce RTX 2080 Ti, making 4K 60fps with all bells and whistles a long shot. While the developers of these games have said that this isn't indicative of the final performance, it's far from reassuring given that these GPUs are slated for release in less than a month. It's best to keep your expectations in check on what the first wave of RTX-enabled games brings to the table.

Barebones developer support
Outside of Shadow of the Tomb Raider, Metro Exodus and Battlefield V, there aren't any major PC games supporting Nvidia's ray tracing tech just yet. Digging into the most popular graphics cards on Steam, the list is dominated by the likes of the Nvidia GeForce GTX 1060, 970, and 1050. All of these are value-for-money mid-range options with high-end cards making up a minuscule percentage of the overall market. Unless Nvidia announces a mid-range RTX card, it's unlikely that we'll see widespread adoption of Nvidia's ray tracing tech anytime soon.

The price of other components
Keep in mind that the starting price of Rs. 51,200 is just for a GeForce RTX 2070. It's disproportionate when you consider that you can build an entire PC within that price. If you're running an older processor you'll probably need to upgrade that as well to prevent CPU bottlenecks. Or if you're using an old 400W power supply, you'll need a newer, more powerful one to keep up with the power consumption requirements. This isn't factoring in the cost of a 4K HDR display to get the best out of your new GPU either. Unless you already have a high-end PC, expect to spend much more than the asking rate for an Nvidia RTX GPU alone.

Although Nvidia has positioned the GeForce RTX range as the absolute best possible gaming experience, the pricing is an exercise in extravagance. If you're looking for a 4K experience, it's a lot cheaper to build a complete PC with a Core i7 and a GTX 1080 or buy a PS4 Pro or an Xbox One X and a 4K HDR TV than it would be to buy a PC with a GeForce RTX 2080 Ti, and you'll have plenty of change to spare for games.

Besides, games like Spider-Man, God of War, Halo 5, and Sunset Overdrive are console exclusive while multiplayer shooters like Call of Duty: Black Ops 4 will have a larger user base on the PS4 and Xbox One versus PC if the past few games in the series are any indication. PC gaming used to have the advantage in terms of game prices. Now that's no longer the case outside of Steam sales.

As it stands, Nvidia might have built a revolutionary GPU, but it’s yet to provide a good enough reason for anyone to consider it at this juncture. If we see some great price drops on the GeForce 10-Series, they might be worth checking out instead.

How Apple Is Attracting Indian Artists, Developers to Grow Its Presence
Realme 2 vs Redmi Note 5 vs Oppo A3s vs Honor 7C: Price in India, Specifications Compared