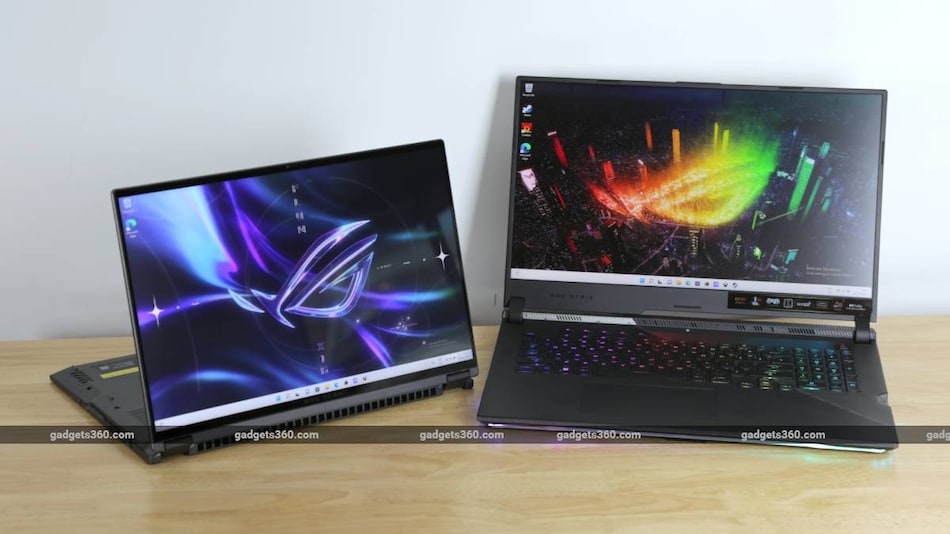 Asus already sells a wide variety of gaming laptops in India, and it can be hard to differentiate between all the series and models. There's the entry-level TUF series; the ROG Strix models are for esports and everyday gaming; ROG Zephyrus models are stylish and powerful; and the relatively new ROG Flow series is for ultraportables. This company is also no stranger to experimenting with form factors. Today, we have early production units of two new Asus ROG gaming laptops that somewhat blur the lines between these categories. When they launch in India later this year, they'll give gamers new options. For now it's time to get a quick first look at the new Asus ROG Flow X16 and the ROG Strix Scar 17 SE.

Following the ultra-portable ROG Flow X13 compact 2-in-1 and the Flow Z13 detachable tablet last year, Asus has now announced a sibling, the 2-in-1 ROG Flow X16. This new model doesn't quite fit the same mould – it's much larger and is more like a standard laptop – but it does offer a degree of flexibility that might appeal to people who want a powerful multi-purpose gaming machine. It's potentially more powerful and more useful, but will still appeal mostly to a niche audience.

The ROG Flow X16 is relatively slim by gaming laptop standards at 19.4mm, but it does feel very solid. It weighs 2kg and is of course wide enough for a 16-inch 16:10 display. The body is wrapped in dark grey metal and the lid has a very interesting diagonal ribbed pattern which makes it very easy to grip. A silver ROG plaque in the lower left corner is the only branding you'll see, and there aren't any RGB LEDs other than the keyboard backlight.

The power button is on the right side, so you can get to it no matter how you're holding or using the ROG Flow X16. There's no fingerprint sensor but you do get an IR camera for Windows Hello face recognition. You'll also reasonable number of ports including a full-sized HDMI 2.0b port, two USB 3.2 Gen2 (10Gbps) Type-A ports, one Type-C (10Gbps) port with DisplayPort 1.4, a 3.5mm audio jack, and a microSD card slot.

What's most interesting is that this device features the same proprietary external PCIe connector as its smaller Flow series sibling, allowing it to leverage Asus' ROG XG Mobile external GPU and dock accessories. It's not clear that you'd want or need an external GPU since you aren't limited to less powerful ones within the laptop's body (more on that later), but you do have the option. Since this connector is built around the Type-C port standard you can actually just plug in another Type-C device in a pinch.

You can fold the screen all the way back and use the ROG Flow X16 as a tablet, but it will be unwieldy

Coming to the screen, which is one of the main attractions, Asus offers a mini-LED option on top-end variants. This is a 2560x1600-pixel 16:10 165Hz panel with 100 percent DCI-P3 colour gamut coverage and 512-zone local dimming. It's Dolby Vision and DisplayHDR 1000 certified, capable of a claimed 1100nits peak brightness. It's also a touchscreen, of course. In my brief time with the ROG Flow X16, content on the display definitely looked bright and vibrant. There's Gorilla Glass for protection but I found it to be extremely reflective under indoor lighting.

The keyboard doesn't seem to have any layout issues. The arrow keys are horizontally compressed but there's space around them. There are dedicated volume and mic mute buttons along with one that launches the ROG Armoury Crate software. Key travel is surprisingly good and the action is a little less crisp than I'm used to. The trackpad is quite large and doesn't have separate buttons.

You can fold the ROG Flow X16 into “stand” mode, with the screen close to you, or all the way back to turn it into a thick tablet. The screen does wobble a bit when touched with a finger. Unfortunately, this device doesn't balance very well if you try to stand it up as a tent. There's a large vent running across the back, which will push air towards you in tablet mode. The ROG Flow X16 is far too unwieldy to hold in one hand and you might not find it comfortable if you're trying to use it like a tablet while lying down or lounging on a couch either.

It's also quite likely that heat will make some kinds of tablet usage situations difficult, though that will only be evident after running a full review. Asus says it has used a new triple-fan cooling system but high-end components do get quite toasty in confined spaces. The ROG Flow X16 has an AMD Ryzen 9 6900HS CPU and your choice of GPUs up to an Nvidia GeForce RTX 3070 Ti, plus up to 32GB of DDR5 RAM and up to 2TB of storage (with space for a second M.2 SSD).

The XG Mobile connector (top) can serve as an extra USB Type-C port. The power button (bottom) is accessible in all positions

Positioned as a more powerful option than even the 2022 Strix lineup, the new ROG Strix Scar 17 SE is based on Intel's brand new Core HX mobile CPUs. These are essentially desktop CPUs repacked and re-engineered to work at up to 55W, allowing for more cores and higher sustained CPU speeds. The ROG Strix Scar 17 SE is clearly meant to be a desk-bound gaming laptop, but at least it can be moved around relatively easily.

This is a bulky gaming laptop by today's standards, but what you get is absolutely top-of-the-line hardware including up to an Intel Core i9-12950HX CPU, Nvidia GeForce RTX 3080 Ti GPU, 360Hz 1080p or 240Hz 1440p display, 64GB of DDR5 RAM, and 4TB of NVMe storage. Asus says its elaborate cooling system can handle a total of 175W of heat dissipation from the GPU plus 65W from the CPU while still remaining quiet.

Prices, when announced, should be astronomical. Asus is clearly aiming the ROG Strix Scar 17 SE at buyers who want the most powerful gaming laptop around. These performance claims will have to be tested when we receive a unit to perform a full review on.

In terms of looks, Asus has thrown a bunch of ideas at this laptop, and there's a lot going on. First of all, Asus has given the lid a UV-sensitive finish and buyers will get a small UV torch in the box which will reveal a patch of graffiti-like neon symbols and some text on the lid. The imagery won't be to everyone's taste but this might help you stand out if you're gaming in an environment with blacklights. The left side of the lip behind the hinge is a semi-transparent piece of plastic that can be popped off and replaced – you get two alternative designs in the box and can 3D print your own. A notch on the right is meant to accommodate an ROG Keystone NFC tag which will come with retail units – this lets owners personalise software settings such as performance profiles and macros, and acts as an encryption key to let you hide files on your SSD.

A portion of the keyboard deck is translucent and is separated by a white strip with ROG logos all the way down it. You can see some of the laptop's inner frame under the right type of light, and the per-key RGB keyboard backlighting creates a neat, but slightly distracting effect as well. Speaking of RGB, a light strip runs around the front of this laptop's base, casting light on your table. The mirrored ROG logo on the lid has RGB lighting around its edges, which actually looks neat. You'll also find ‘MMVI' moulded into one of the rear exhaust vents, which is a reference to the ROG brand's founding year. The combined effect of all these design touches is about as unsubtle as you can get, but there should be people who care only about power.

The display is thankfully non-reflective, but Asus has chosen to forego a webcam entirely in order to keep the borders slim. Quad speakers should make for engaging sound in games and other content. The keyboard layout is comfortable, and the arrow keys have room to breathe even though there's a full number pad. You get Wi-Fi 6E along with a 2.5G Ethernet port and Thunderbolt 4, plus additional USB ports, HDMI, and a 3.5mm audio jack. The 330W power adapter is expectedly huge and heavy.

It's too early to talk about the performance of both the ROG Flow X16 and the ROG Strix Scar 17 SE, and we also don't have pricing details for India yet. It will be interesting to see how comfortable and practical both these devices really are, when we get to perform full reviews on shipping retail units. It remains to be seen whether people want a bulky 2-in-1 that can play games and connect to an external GPU, or whether there's an upper limit to how much people will spend for top-end hardware. Do stay tuned to Gadgets 360 for the answers.