Fast Pair will work with smart TVs based on Google TV or Android TV platforms in the coming months, Google said. 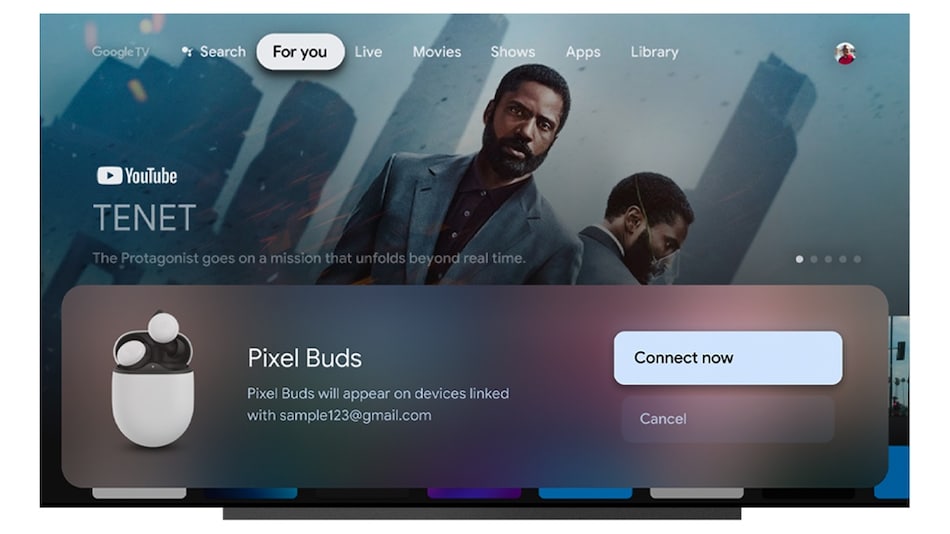 Google on Wednesday announced a series of updates coming to Android that are aimed to bring convenience and ease to users. One of the most significant changes is the expansion of Fast Pair to TVs, Chromebooks, and ​​smart home devices. Headphones will also get the ability to automatically switch the audio from an Android device to a tablet seamlessly, Google announced. The company has additionally announced a quick setup of Chromebooks with Android phones. Similarly, smartwatches based on Wear OS will get the ability to unlock your Chromebook and Android devices.

Fast Pair has been in place for Android phones since November 2017 to let users quickly connect Bluetooth headphones with their smartphones. The proprietary standard is aimed to take on Apple's quick pairing technology and is claimed to have helped people connect their Android phones with Bluetooth accessories over 100 million times.

Google is planning to expand Fast Pair to newer devices by partnering with various manufacturers and bringing new experiences.

Starting in a few weeks, Google said that users will be able to connect their Fast Pair-enabled Bluetooth headphones with a Chromebook automatically in a single click when they are turned on for the first time.

In addition to Chromebooks, Fast Pair will work with smart TVs based on Google TV or Android TV platforms in the coming months to help users quickly connect their compatible headphones with their TVs, without going through a step-by-step process.

Smart home devices from Matter will also get Fast Pair support in the coming weeks. It will let you instantly connect Matter-made smart home devices to your network, Google Home, and other accompanying apps.

Google also revealed that it is developing a technology for Bluetooth-enabled headphones to let them automatically switch the audio to the device you're listening to. For instance, if you are wearing your headphones to watch a movie on your Android tablet and get a call on your phone in the middle of your watch time, the movie will pause and the headphone audio will automatically switch to your Android phone. It will come back to your tablet once the call is disconnected.

Google also announced that users will be able to instantly set up a new Chromebook with their Android phone and provide immediate access to information such as Google login and Wi-Fi password, without requiring user to enter them manually on the fresh hardware. The experience will go live later this year, though Google hasn't yet detailed what all the Chromebook models and Android versions will get the update.

Users will also get the feature to unlock and access their Chromebook and Android phone or tablet using a paired Wear OS smartwatch when the devices are close by. This sounds similar to the ‘Unlock with Apple Watch' feature introduced by Apple last year.

Chromebook users will also get the ability in the dedicated Phone Hub section to view and respond to the messages they get on their Android phones directly from the larger screen of their computing device. It will be available later this year, the company said, without describing how it would enable the experience.

The Phone Hub will additionally include Camera Roll to let users access their most recent photos and videos on a Chromebook.

Google also announced expansion of Fast Pair to Windows PCs to let users quickly set up Bluetooth accessories, sync text messages, and share files using the Nearby Share service. The update will first make its way to machines from Acer, HP, and Intel later this year.

Microsoft already has the Your Phone app to allow Android users to access their messages and notifications directly on Windows PCs.

To help users cast music and podcasts they are listening on their phones to louder audio solutions, Google revealed that it is working on bringing Chromecast built-in soundbars and speakers. Bose will be the first brand to offer the new experience on its smart speakers and soundbars in the next few months.

Last month, Google introduced a digital car key functionality that will use phones with Ultra-Wideband (UWB) to unlock the car lock. It will be initially limited to Samsung and Google Pixel phones and will only work with BMW vehicles. However, Google said that digital car keys will work on more Android phones and vehicles later this year.

The Android maker also revealed that it is working on features including asking Google Assistant to warm up and cool down a car, lock and unlock, get information including how much battery is left. These features will first come to select vehicles from Volvo Cars in the coming months, Google said.