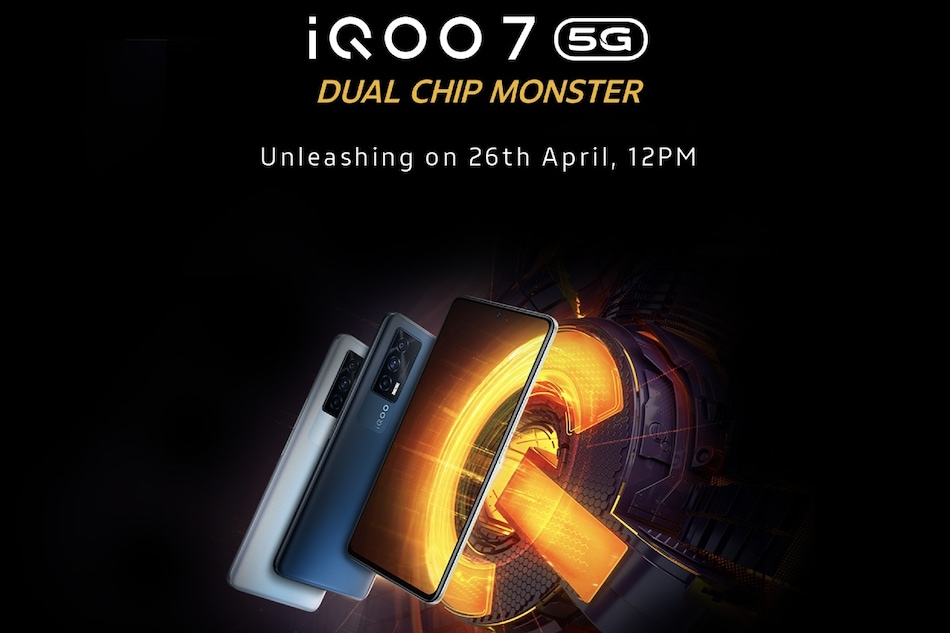 iQoo 7 series is set to launch in India today (Monday, April 26). The launch event will take place virtually, owing to the ongoing pandemic. iQoo 7 and iQoo 7 Legend, aka iQoo 7 BMW M Motorsport edition, are expected to be the two new smartphones that the Chinese company will launch in the country at today's event. Both new models debuted in China in January. However, the India variant ofiQoo 7 is expected to be a rebranded iQoo Neo 5 and have a slightly inferior specifications list over what came with its China model. The iQoo 7 Legend edition, on the other hand, is likely to remain identical to the phone that arrived in the Chinese market.

iQoo 7 series India launch will begin at 12pm (noon) today and will be livestreamed through the company's YouTube channel. You can also watch it live below:

iQoo 7 price in India is yet to be revealed, though it was recently tipped by Amazon to be priced at Rs. 34,999. The smartphone was launched in China with a starting price of CNY 3,798 (roughly Rs. 43,800). However, since its India variant is likely to have some differences over the model that debuted in China earlier, you can expect some price-level distinction. iQoo 7 Legend is teased to come with a price tag of under Rs. 40,000 in the country.

The Indian variant of iQoo 7 is teased to come with Qualcomm Snapdragon 870 SoC, which is unlike its China counterpart that has a Snapdragon 888. The rear camera arrangement of iQoo 7 appeared on Amazon is also aligning with what we saw on the iQoo Neo 5. Other specifications of the iQoo 7 India variant are also likely to be similar to those of iQoo Neo 5, that means you could get 6.62-inch full-HD+ (1,080x2,400 pixels) AMOLED with a 120Hz refresh rate and a 4,400mAh battery with 66W fast charging support. The smartphone will also come with the triple rear camera setup that will include a 48-megapixel Sony IMX 598 primary sensor and optical image stabilisation (OIS) support, as per the teaser available on Amazon.

The dual-SIM (Nano) iQoo 7 Legend runs on Android 11 with OriginOS on top. It features a 6.62-inch full-HD+ (1,080x2,400 pixels) AMOLED display with 120Hz refresh rate. The phone is powered by the octa-core Qualcomm Snapdragon 888 SoC, along with up to 12GB of RAM and up to 256GB of onboard storage. It comes with the triple rear camera setup that has a 48-megapixel primary sensor, 13-megapixel ultra-wide shooter, and a 13-megapixel portrait sensor.

For selfies and video chats, iQoo 7 Legend has a 16-megapixel camera sensor at the front.