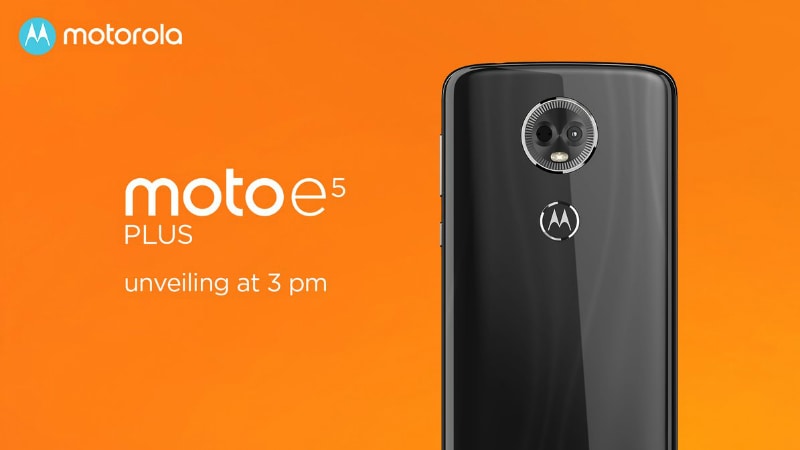 The Moto E5 Plus India launch event has started with Moto India's Head of Marketing Rachna Lather taking the stage, bringing the budget smartphone with 5000mAh battery to the country. The company is focussing on data consumption, social media and videos, which it has attributed to telecom operator Jio, suggesting one of the launch offers with the company may be in the offing. As expected, the company is promoting the big battery of the Moto E5 Plus, but there was a surprise too - the Moto E5 is being launched at the same event. The Lenovo-owned brand also revealed that India accounted for the biggest share of sales for Moto E series across the world.

The Moto E5 price in India is Rs. 9,999, while the Moto E5 Plus will cost Rs. 11,999. The latter will be an Amazon exclusive online and will go on sale tonight at 12am. For July 11 and July 12, the smartphone will come with a Rs. 800 discount on SBI cards, no-cost EMIs up to 9 months, and 130GB data additional data from Jio. Those who buy the device from a Moto Hub outlet or Motorola offline partners, there will be a Rs. 1,200 vouchers on purchases made using Paytm Mall. The Moto E5, on the other hand, is already available via Moto Hubs, and will come with the Paytm Mall and Jio offers.

Moto claims the Moto E5 Plus will be able to deliver 18 hours of video playback and over 200 hours of music playback. It comes with a 10W fast-charger and the Moto Display functionality for lock screen notifications. The smartphone has a selfie flash and professional modes in both the front and rear cameras. It is also said to be thinner and lighter than its predecessor and has a laser autofocus sensor, a first for the E series. The Moto E5 Plus launch is being live streamed, so you can catch all the updates in real-time by hitting the play button in the below video. We will be at the event too, so you can just refresh this page to get all the updates from the event.

Since the smartphone launching today is expected to have the same specifications as the global variant, the major draw from the event will be the Moto E5 Plus price in India. The release date and launch offers will be revealed at the event too. It is already known that the smartphone will be an Amazon exclusive in the country.

The single-SIM (Nano-SIM) Moto E5 Plus has a 6-inch IPS display with 18:9 aspect ratio and HD+ (720x1440 pixel) resolution. Its highlight is the 5000mAh battery, with TurboCharge support that the company says will provide juice worth 6 hours on 15 minutes of charge. The stock Android 8.0 Oreo smartphone is said to run on the Snapdragon 435 processor, with 3GB of RAM. Its body has a splash-resistant coating to protect it from splashes of water and other liquids.

Moto E5 is the next in line in this series, featuring a 5.7-inch display with the same 18:9 aspect ratio and HD+ resolution as its sibling. However, it gets the 1.4GHz quad-core Snapdragon 425 chip inside, with 2GB of RAM to keep things running. Another major difference is that the battery capacity is 4000mAh. However, it will come in dual- as well single-SIM (Nano SIM) variants.

As for the optics, the stock Android 8.0 Oreo-based Moto E5 has a 13-megapixel rear shooter with f/2.0 aperture and LED flash as well as a 5-megapixel selfie camera. It will be released in Flash Gray and Fine Gold colour options, and feature 4G LTE, Wi-Fi, Bluetooth 4.2 LE, NFC (in single SIM variant only), the usual sensors, and 3.5mm audio jack. It measures 154.4x72.2x8.95mm and weighs 174 grams.