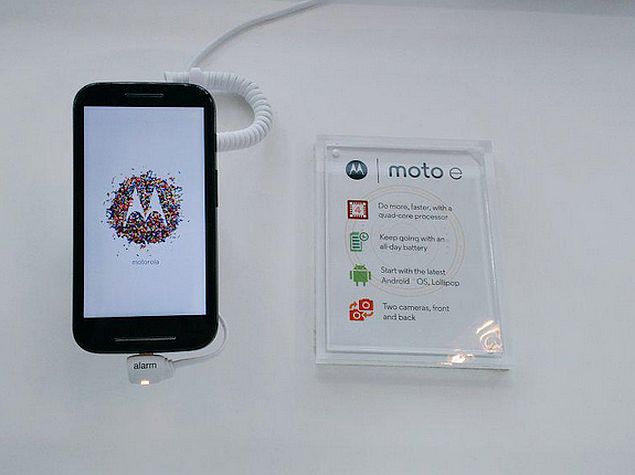 Notably, both the Motorola Moto E (Gen 2) and Moto E (Gen 2) 4G are now receiving the latest Android version, according to user reports in some regions. Confirming the rollout, Motorola has posted Android 5.1 Lollipop release notes for the handset.

The Android 5.1 Lollipop update for the Moto E (Gen 2) should start rolling out over-the-air (OTA) and a notification should pop up when the update becomes available to users in India. Users can also manually check for the update by going to Settings > About phone > Software update on the Moto E (Gen 2).

As per the official release notes on Motorola's website, the Android 5.1 Lollipop update for Moto E (Gen 2) handset will let users block interruptions until the next alarm, alter notification volume controls while media is playing, apart from dismissing a head-up notification and swipe it up to remove it from the screen.

Apart from a new pull-down menu for quickly selecting different Wi-Fi access points or paired Bluetooth devices, Moto E (Gen 2) users would also be able to hide conditional setting tiles in case they are using features like 'Invert Colours' or 'Hotspot'. The Android 5.1 Lollipop update will also reduce noise in low-light shots and will bring improved responsiveness of the front-facing camera viewfinder, Motorola claims. Improvements in ART (Android Run Time), which will result in faster opening of apps, is also included.

The update also brings device protection, which will make sure that if your device is lost or stolen it will stay locked until you sign in with your Google account, even if someone resets it to factory settings. A number of other bug fixes included in the Android 5.1 Lollipop update for Moto E (Gen 2) deal with handset's Wi-Fi, Chrome browser crashes, Bluetooth discovery and more.

Recently, Motorola announced that Android 5.1 'test drive' for the Moto X (Gen 1) started and the update should start rolling out in some weeks.