Motorola One Vision is the company's first to feature a hole-punch display. It also features a 48-megapixel rear camera. 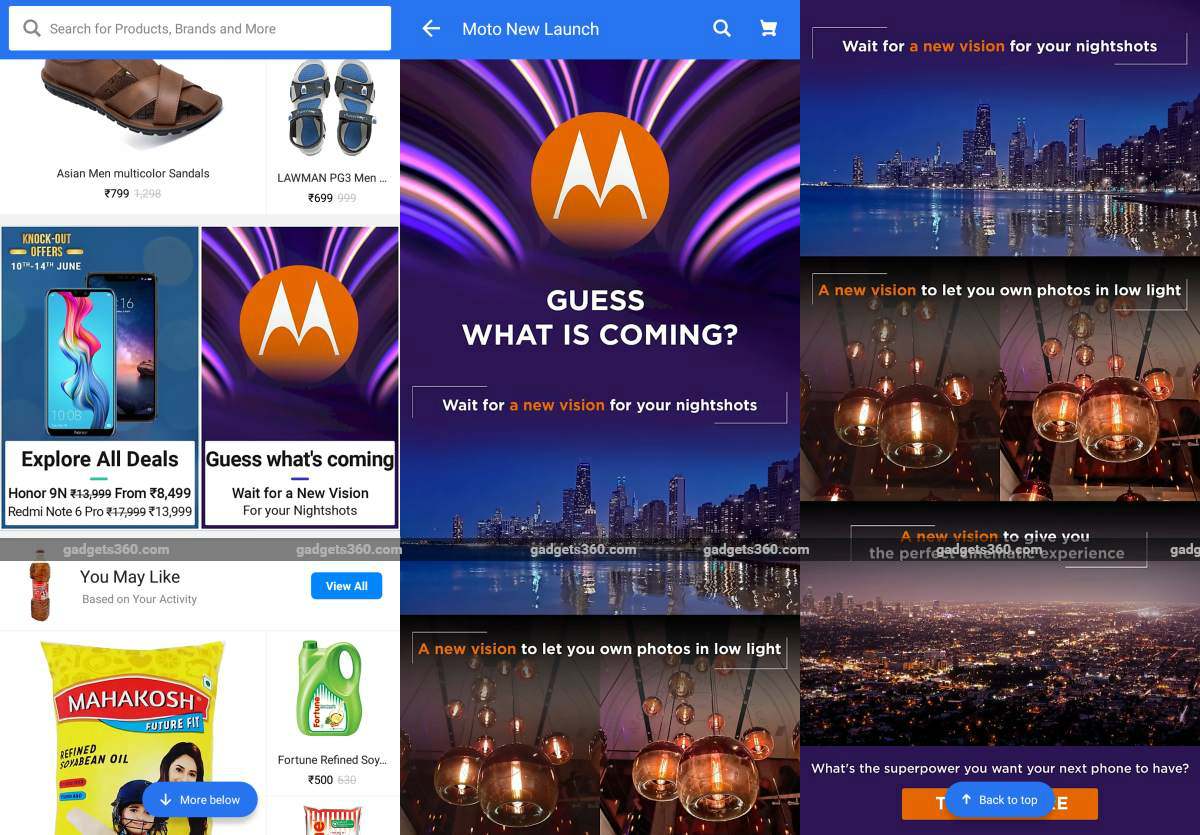 Motorola One Vision was launched in Brazil last month, with a dual rear camera setup

As we mentioned, Flipkart on its mobile app has started teasing the launch of the Motorola One Vision. You can check out the teasers above. All the teasers use the tagline “new vision”, matching Motorola India's teaser from last week. The Motorola One Vision teasers on the Flipkart app also mention the “cinematic experience” buyers would enjoy with the new Motorola offering, referring to the 21:9 CinemaVision display that features a hole-punch cutout – and no notch – for the front camera. Low-light photography prowess is also being touted by the e-commerce site, probably referring to large f/1.7 aperture on the 48-megapixel primary camera in the Motorola One Vision's dual rear camera setup. Of course, just because Flipkart is teasing the smartphone - it doesn't confirm the Motorola One Vision will be exclusive to the e-commerce site, but does indicate it.

The Motorola One Vision is already on sale in Brazil, Saudi Arabia, and Thailand. In Brazil, the smartphone is priced at BRL 1,999 (roughly Rs. 35,800), though globally, it was given a recommended retail price of EUR 299 (roughly Rs. 23,500). We can expect the Motorola One Vision price in India to be closer to this latter figure. It was launched in two colour variants - Brown and Sapphire Blue - and we can expect these colour variants to also make their way to the country.

The dual-SIM (Nano) Motorola One Vision runs Android 9.0 Pie, and the smartphone is part of Google's Android One programme, implying timely updates and bloatware-free interface certified by the Mountain View giant. The Motorola One Vision sports a 6.3-inch full-HD+ (1080x2520 pixels) display with 21:9 CinemaVision aspect ratio.It is powered by a 2.2GHz octa-core Samsung Exynos 9609 SoC, and comes with 4GB of RAM.

There is 128GB of inbuilt storage on the Motorola One Vision, expandable via microSD card (up to 512GB) in a hybrid dual-SIM configuration. Connectivity options include 4G VoLTE, Wi-Fi, Bluetooth v5.0, USB Type-C port, NFC, GPS/ A-GPS, and a 3.5mm audio jack. Sensors on board include fingerprint sensor on the rear panel, an accelerometer, ambient light sensor, digital compass, gyroscope, magnetometer, and proximity sensor. The Motorola One Vision packs a 3,500mAh battery with TurboPower fast charging support. It is touted to give you up to 7 hours of power in just 15 minutes of charging. It measures 160.1x71.2x8.7mm and weighs 181 grams.