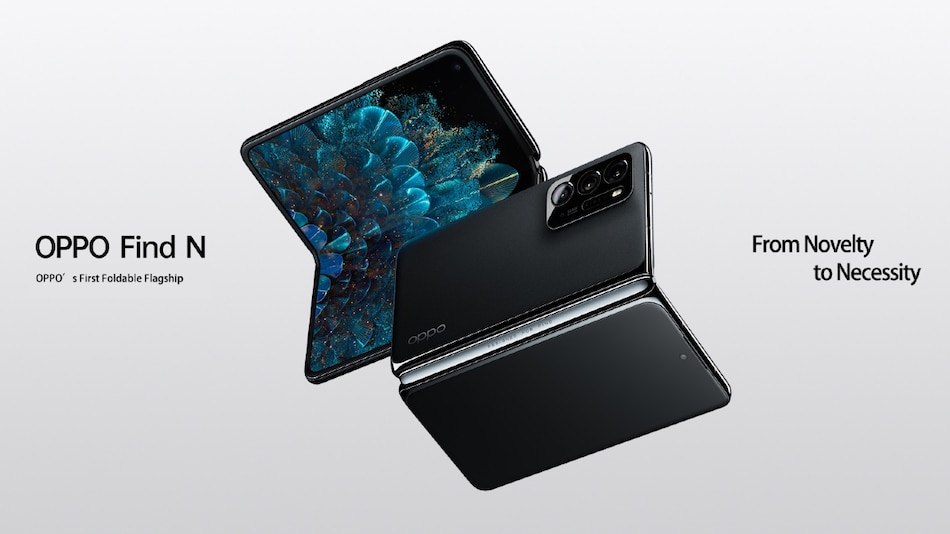 Oppo Find N foldable smartphone has been launched on the second day of Oppo Inno Day annual event in China. Oppo says that the smartphone comes with Flexion Hinge and folds perfectly, leaving virtually no gap between two sides of the folded display. The handset will debut in China, and it will be available later this month, as per Oppo. The handset is launched a day after the company launched Oppo Air Glass and MariSilicon X imaging NPU. Oppo Find N will compete with Samsung Galaxy Z Fold 3.

Details about the pricing and availability of the Oppo Find N in other markets are yet to be revealed.

Oppo Find N is a result of four years of research and development, and it went through six generations of prototypes, the company claimed. The smartphone sports a 5.49-inch OLED display with 18:9 aspect ratio on the outside. The inward folding display, called Oppo Serene Display, measures 7.1 inches when unfolded. It offers 120Hz refresh rate, has LTPO technology, offers 1,000 nits of peak brightness, and is protected by Corning Gorilla Glass Victus. The folding display is claimed to provide 60 percent more screen area than a traditional 6.5-inch phone. It also comes with an 8.4:9 aspect ratio.

Both inward and cover displays of the Find N are rated to deliver 10,240 automatic brightness levels using a built-in ambient sensor. The company is also claimed to have fine-tuned both the brightness and color calibration between the inner and outer displays to deliver a consistently smooth experience.

Oppo claims that the smartphone has a 12-layer display structure and features an ultra-thin glass (0.03mm). Citing German testing firm TÜV Rheinland, Oppo says that the display can survive over 200,000 folds and has been tested in -20 degree Celsius. Additionally, Oppo Find N is also claimed to offer up to 80 percent less crease compared to competitors, as per TUV.

The company says that this feat has been achieved by an indigenously developed Flexion Hinge which has 136 individual parts. The hinge is also claimed to be responsible for virtually no gap between the panels of the folded screen (0.01mm precision). The hinge also allows Oppo Find N to be used like a laptop, in FlexForm Mode. As per the Chinese company, users can keep the phone folded, at an angle between 50 degrees and 120 degrees.

Chief Product Officer Pete Lau said that the hinge of the Oppo Find N gave a feel of opening and closing the door of a Limousine car. The phone also automatically locks the cover display when the inward display is folded in three seconds to maintain user privacy.

Under the hood, Oppo Find N has a Qualcomm Snapdragon 888 SoC, paired with up to 12GB of LPDDR5 RAM and up to 512GB of UFS 3.1 storage. The smartphone comes with a 4500mAh battery with 33W SuperVOOC wired charging, which is claimed to juice up 50 percent battery in half hour, and fully powers up the phone in 70 minutes. The smartphone also comes with 15W AirVOOC wireless charging, and 10W reverse wireless charging support as well.

Oppo Find N runs Android-based custom software. It offers a Flexform Mode in which the bottom top and bottom screen is automatically divided, to allow users to work in laptop style.

For multitasking, Oppo has introduced a Two-Finger Split gesture in the Oppo Find N. In this feature, a user has to swipe two fingers in the centre of the screen, and a multi-screen interface is opened for multitasking. Users can also save tasks in a split window on the home screen in the form of an icon, and when you tap the icon, it opens in the split-screen format. Oppo claimed that as many as 30,000 apps are already compatible with its split-screen experience.

Oppo Find N also has a four-finger zoom feature which triggers a floating window when the user pinches the main screen with four fingers. There is Seamless Relay in place as well, which allows users to continue tasks running from unfolded screen to outer screen by just a swipe up on the outer screen. Additionally, there are various keyboard customisations, including a split keyboard for the larger screen.

The Find N also has a Parallel Window mode where users can have a video chat on one side of the folding display and messaging on the other — simultaneously. Users can also adjust the screen ratio of both sides by a dragging gesture.

Further, Oppo is working with companies including AutoNavi to offer an enhanced in-car navigation system on the Find N by utilising its folding display. The phone also comes preloaded with a specially designed virtual keyboard that supports handwriting and is backed by a word bank for auto prediction.

The Find N also comes with a custom split-camera user interface where users can use the inner display to take photos on one side and then view, share, or delete their most recent photo on the other side.

Other features on Oppo Find N include X-axis linear motor and stereo speakers with Dolby Atmos support. The back of the Find N and its rear camera module are based on the fluid curve design language of the Find X3. It is also protected by the Gorilla Glass Victus.

Connectivity options include 5G, 4G LTE, Wi-Fi 6, Bluetooth v5.2, GPS/ A-GPS, NFC, and a USB Type-C port. The phone also comes with a side-mounted fingerprint sensor and is equipped with dual speakers that are powered by Dolby Atmos.