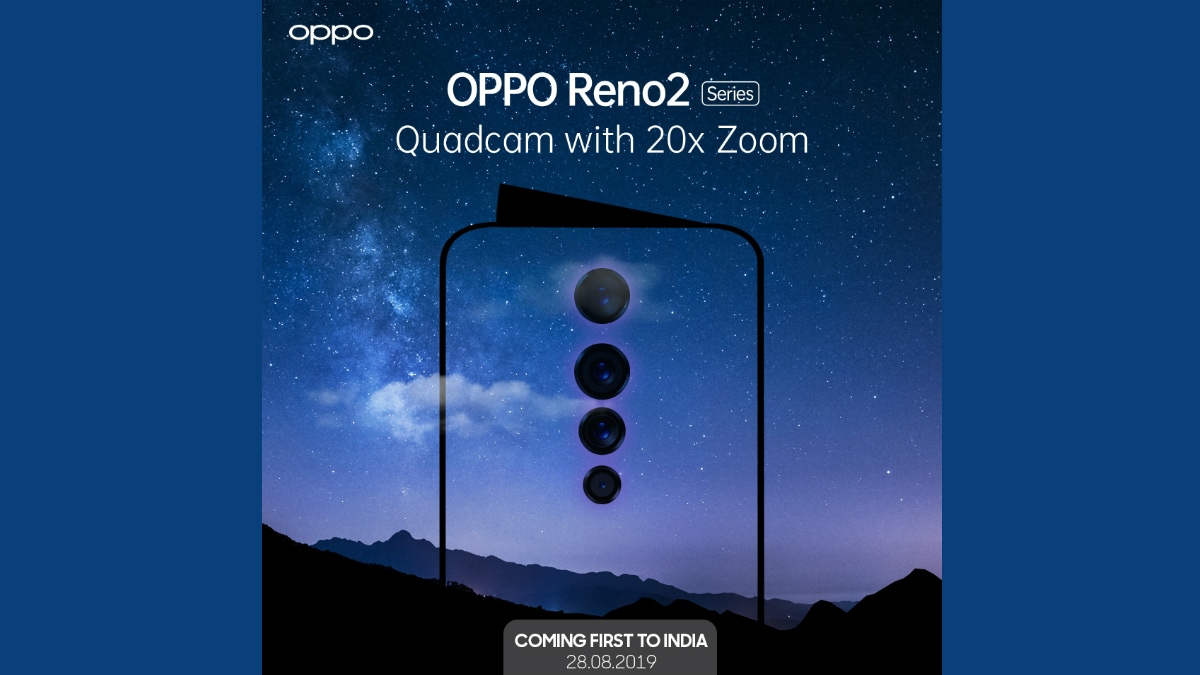 Oppo Reno 2 has now been confirmed to launch in India on August 28, or at least, the 'Oppo Reno 2 series'. The phone will launch first in India, and is set to feature a quad camera setup at the back. It will also sport 20X zoom, something that will be integrated into a smartphone for the first time. The teaser poster suggests that the phone will sport side-swing selfie camera technique similar to the Oppo Reno series. To recall, the Oppo Reno and Oppo Reno 10X Zoom phones were unveiled in April and were launched in India in May this year.

The company has now confirmed that the successor of the Oppo Reno series will launch on August 28. Note that tweet's attached image says 'Oppo Reno 2 series', while the tweet itself says Oppo Reno 2, so there is some confusion about whether the phone is just the first of several Oppo Reno 2 series phones.

India will be the first market to see the launch of this phone, and not the home market China - matching an IANS report from earlier this month that cited industry sources. However, it should expand to other markets soon after. Apart from the launch date, the company has also confirmed that the Oppo Reno 2 will have a quad camera setup at the back. The Oppo Reno 10X Zoom Edition, on the other hand, has a triple rear camera setup at the back, while the Oppo Reno base variant only houses a dual rear camera setup.

Furthermore, the company also confirms that the Oppo Reno 2 will arrive with 20X Zoom support. It doesn't detail how it will manage to get there, but we presume a hybrid zoom solution. The teaser poster also suggests that the side-swing 'shark-fin' pop-up selfie camera mechanism will trickle down to the Oppo Reno 2 as well. There might be multiple variants of the Oppo Reno 2 launched on August 28, but the company hasn't confirmed that as of yet.

Oppo's decision to launch the Reno 2 in India first, shows its commitment to the market and its audience. There's little else that we know about the phone as of yet, but the company roll out more teasers running up to the launch at the end of the month.