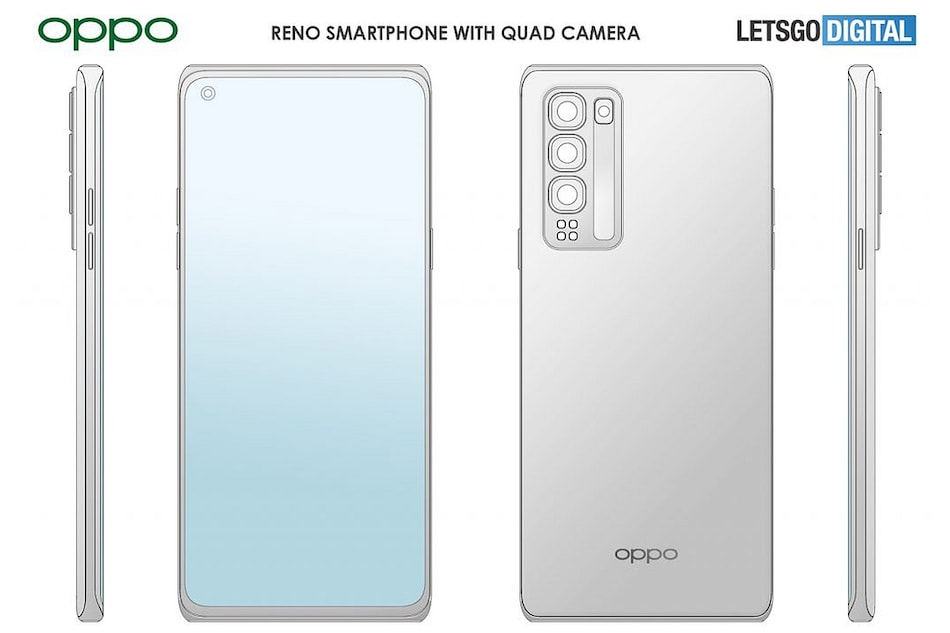 The 3C listing for the Oppo Reno 7 Pro was spotted by MySmartPrice. The certification doesn't divulge much information about the smartphone. It mentions the model designation — PFDM00 — of the upcoming Oppo smartphone and that it will come with 65W SuperVOOC 2.0 fast charging support. The phone is said to pack a 4,500mAh battery. The report also suggests that the Oppo Reno 7 Pro may be powered by a MediaTek Dimensity 1200 SoC, likely paired with up to 12GB of RAM and 256GB of onboard storage. The smartphone is speculated to launch in a few months.

Last week, LetsGoDigital (in Dutch) shared patent images of Oppo Reno 7 Pro smartphone that the Chinese tech giant allegedly filed with China National Intellectual Property Administration (CNIPA). The renders show that the upcoming smartphone will have a flat display with a hole-punch cutout on the left top corner and thin bezels on all sides. It is shown with a power button on the right side and two volume buttons on the left. It reportedly gets a 3.5mm headphone jack at the top while the bottom houses a SIM tray, USB Type-C port, and a speaker grille.

The back of the Oppo Reno 7 Pro is shown with a quad rear camera setup mounted in a rectangular housing at the top left corner. Three sensors are seemingly placed in one line along with a flash. The fourth sensor is shown on the right side of the rest of the sensors. The fourth sensor is said to be optional as Oppo has submitted the patents with and without the fourth sensor. Alternatively, another patent shows the smartphone without the hole-punch cutout for the selfie camera, which could mean an under-display sensor.

Earlier this month, tipster Abhishek Yadav (@yabhishekhd) — citing a source on Weibo — shared some key specifications of the vanilla Oppo Reno 7 along with an image showing the front and back of the smartphone. Yadav mentioned that the upcoming smartphone will sport a 6.5-inch full-HD+ display by BOE with a 90Hz refresh rate and 10-bit colour. The standard Oppo Reno 7 is said to be powered by a MediaTek Dimensity 920 SoC with LPDDR4x RAM and UFS 3.1 storage. Yadav also said that the smartphone will get a 4,500mAh battery with 65W fast charging support.