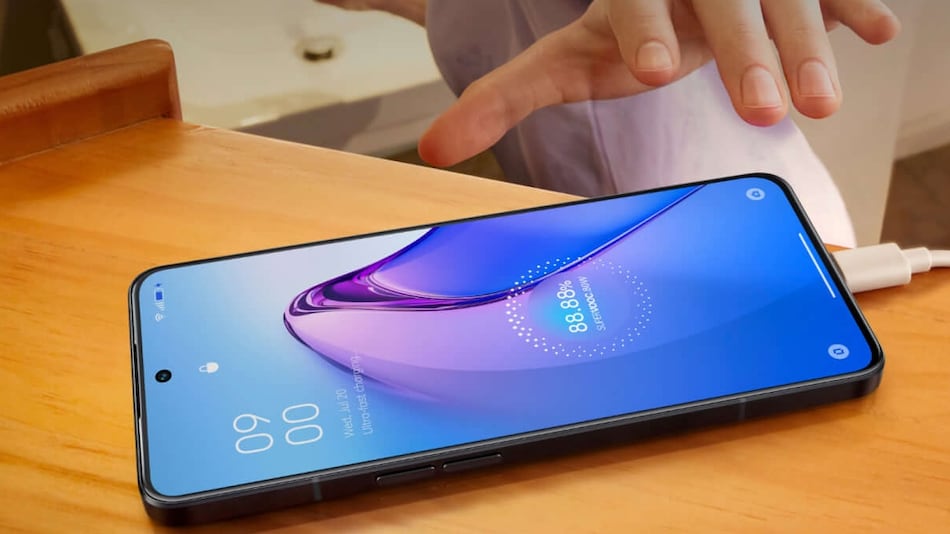 Reno 8 Pro will have the MediaTek Dimensity 8100 SoC

Oppo Reno 8 Pro and Oppo Reno 8 will be launched in India on July 18. Multiple leaks had recently suggested the expected specifications as well as RAM and storage details of the Oppo Reno 8 series models. In a new update, price details and hands-on images of the Oppo Reno 8 Pro have surfaced online indicating its design and other key specifications. The live images show the handset in a Black shade and suggest a hole-punch display design for the phone. It could pack a triple camera setup at the back. It is confirmed to be powered by the MediaTek Dimensity 8100 Max SoC.

Known Chinese tipster Paras Guglani (@passionategeekz) on Twitter posted live images showcasing the design of the Oppo Reno 8 Pro. The leaked live shots show the handset in a black shade with a hole-punch display design. A triple rear camera unit is seen arranged on the upper left corner of the back panel, along with the LED flash. The look is similar to that of previous Oppo Reno series models. Further, the live shots of Oppo Reno 8 Pro show thin bezels.

According to the tipster, the Oppo Reno 8 Pro will go on sale with an initial price tag of around Rs. 46,000. Recently, another tipster had leaked the renders for the smartphone and suggested that the Reno 8 Pro variant with 12GB RAM and 256GB storage would cost Rs. 52,990.

To create some hype for its launch in India, Oppo has teased key specifications of the Oppo Reno 8 Pro via a dedicated microsite on its website. The Oppo Reno 8 Pro will be powered by a MediaTek Dimensity 8100 Max SoC and offer a super-conductive VC liquid cooling system for gaming. It will come equipped with the MariSilicon X imaging neural processing unit (NPU) and sports a 6.7-inch AMOLED display with 120Hz refresh rate. The handset is teaed to come with 80W SuperVOOC fast charging support which is claimed by Oppo to fill the battery up from 0 to 50 percent in just 11 minutes. The camera setup is also confirmed to support 4k ultra night video recording. The smartphone has a slim design with 7.4mm thickness.

The launch of the Oppo Reno 8 series in India will take place at 6pm IST on July 18. The Oppo Pad Air and Oppo Enco X2 TWS earphones will also debut alongside the new handsets.