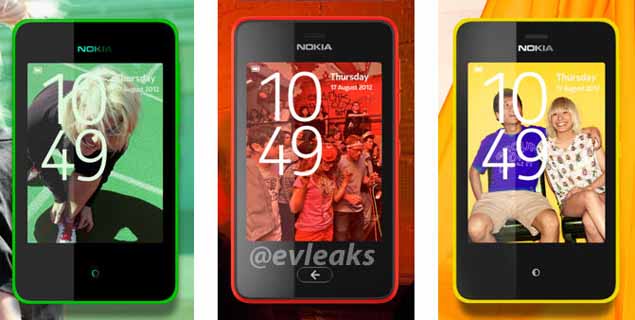 Nokia is currently offering affordable mobile phones under its Asha brand and there have been reports that the Finnish handset maker will be launching a refreshed range of Asha devices in the near future. These handsets will allegedly come with an improved design and UI.

A picture featuring these mobile handsets has been posted online by the Twitter user @evleaks. This images features three different handsets in bold colours such as green, red and yellow. From this picture, it appears that Nokia is trying to apply a similar design philosophy for its Asha devices that it had adopted for its Lumia smartphones.

Another interesting thing to note is that, as per this image, all these touch devices under the Asha series will have only one physical button in the middle for the home key.

Some news sources have also indicated that the new devices under the Asha series will have a better camera module and should have at least 5-megapixel camera on-board.

As per a recent research report by Cyber Media Research, Nokia continues to dominate the overall handset market in India with 21.8 percent share.

The company had recently announced its most affordable Windows Phone 8 smartphone in India - Nokia Lumia 520. Nokia Lumia 520 comes with 4-inch super sensitive touchscreen which the company believes will make it competitive with other budget smartphones. The display resolution of the smartphone is 480x800 pixels. Lumia 520 also comes with dual-core 1GHz Snapdragon processor alongside 512 MB of RAM. The internal storage available on the device is 8GB and can be expanded by another 64GB via microSD card.

There is a 1,430mAh battery on board Lumia 520, which as per company claims gives 9.60 hours of talk time and standby time of 15 days. It has a 5-megapixel autofocus rear camera.

Under its Asha range, Nokia had recently launched its Nokia Asha 205. It is a QWERTY device with a 2.4-inch display and a dedicated Facebook button. Connectivity options of this mobile include 2G and Bluetooth. It has a VGA camera and a battery that offers 11 hours talk-time. The phone comes with pre-installed apps like eBuddy Chat, Twitter and support for popular email accounts such as Gmail, as well as 40 free games from EA.

In the Indian market, Nokia is facing increased competition in the sub Rs. 5,000 category from the local handset makers offering affordably priced Android 2.3 (Gingerbread) smartphones. Recently, Samsung too has launched its REX series to take on the Nokia Asha series. At this stage, it has become imperative for Nokia to raise the bar for its existing Asha devices. If the company is able to launch these new handsets at a competitive price, then it will add a lot of excitement in the Indian feature phone segment.