Realme 10 Ultra could come with a curved display. 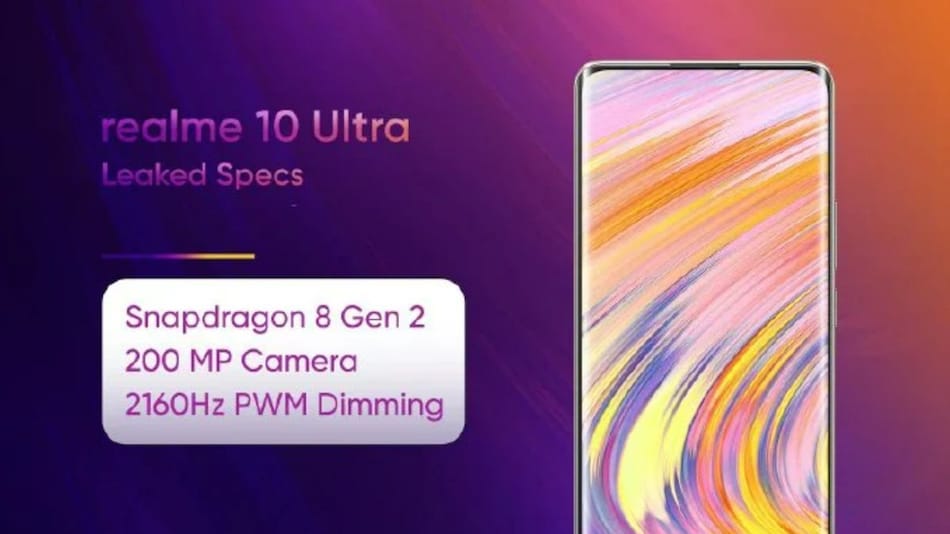 Realme 10 Ultra powered by Snapdragon 8 Gen 2 SoC has been tipped to launch along with the Realme 10 Series. A tipster has leaked a poster of the Realme 10 Ultra on Weibo, which also hints at the other specifications of the smartphone. Additionally, the Chinese brand has confirmed that the Realme 10 series will launch in China on November 17. The Realme 10 4G will come with a full-HD+ Super AMOLED display with a 90Hz refresh rate and will be powered by a MediaTek Helio G99 SoC.

Well known tipster Ice Universe has shared a poster on Chinese social media website Weibo, which hints at the launch of a Realme 10 Ultra. The Ultra edition has been tipped to be powered by the Snapdragon 8 Gen 2 SoC. The smartphone could also house a 200-megapixel primary camera and 2160Hz PWM dimming, as per the leaked poster. The Realme 10 Ultra may come featuring a curved edge display, as per the image in the poster.

Realme has also confirmed, via another post on Weibo, that the Realme 10 series will launch in China on November 17. The Realme 10 vanilla variant is expected to launch in Thailand on November 9. The company also revealed the colour options and design of the standard variant.

Specifications of the Realme 10 4G have been revealed by the Chinese tech company. The smartphone is said to sport a full-HD+ (1,080x2,400 pixels) Super AMOLED display with a 90Hz refresh rate. The display gets a hole-punch slot in the top left corner for housing the selfie camera. This Realme smartphone is powered by a MediaTek Helio G99 SoC. It gets 8GB of onboard RAM and up to 8GB of Dynamic RAM.

It features a 50-megapixel dual rear camera setup and a 16-megapixel front camera. The Realme 10 4G runs on Android 12 with Realme UI 3.0 skin on top. It is also equipped with UltraBoom speakers with Hi-Res audio quality support. The smartphone features a 5,000mAh battery with 33W SuperVOOC fast charging support. Its battery can last for up to 21 hours of video streaming, the company claims.

Elon Musk Urged by UN to Ensure Human Rights Are Central to Management of Twitter
Twitter Blue India Rollout Could Take Place in 'Less Than a Month', Elon Musk Says