Realme 9 Pro series launch in India will take place at 1:30pm on February 16, according to the company’s invite. 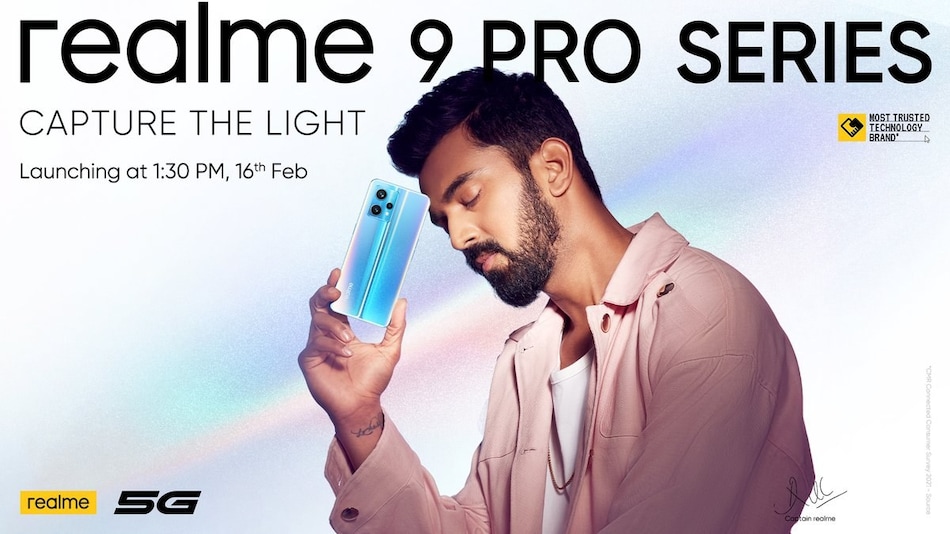 Realme 9 Pro series is coming with a Light Shift Design

Realme 9 Pro and Realme 9 Pro+ India launch date is set for February 16, the Chinese company confirmed on Thursday. The Realme phones have been a part of the rumour mill for the past few months. The February 16 launch date was also tipped recently. In addition to the official launch date announcement, Realme Vice President Madhav Sheth has indicated the possible Realme 9 Pro series price in India during an ask-me-anything (AMA) session. Realme has also teased some of the key specifications of the Realme 9 Pro series. The phones will come with triple rear cameras and a Light Shift Design.

Realme Vice President Madhav Sheth held an AMA session, called AskMadhav, on YouTube on Wednesday, where he suggested that the Realme 9 Pro series price in India will be set at above the Rs. 15,000 mark.

“As the brand aims to go premium in 2022, we aim to expand the 9 Pro series above the 15,000 segment, with all the devices in the Pro series being 5G enabled and built an overall enhanced and more premium mid-range experience,” he said.

The AMA session also confirmed that alongside the Realme 9 Pro series, Realme is working on the regular Realme 9 series that would debut at a later stage. Sheth also teased the plans to launch the Realme Buds Air 2 successor this quarter. Further, he suggested the development of a 65-inch Realme TV.

Realme 9 Pro and Realme 9 Pro+ specifications will include the triple rear camera setup and the Light Shift Design that will change colours in sunlight, as per the details available on a dedicated webpage available on the Realme India site. The webpage also shows that Realme 9 Pro+ in the series will have a primary 50-megapixel Sony IMX766 sensor with optical image stabilisation (OIS) and an octa-core MediaTek Dimensity 920 SoC.

In contrast, Realme 9 Pro is mentioned to have a primary 64-megapixel Nightscape camera, Qualcomm Snapdragon 695 SoC, and a 120Hz display. The phone is also teased to have a 5,000mAh battery with 33W Dart Charge fast charging and NFC support. Moreover, Realme 9 Pro will feature the same Night Shift Design that will be available on Realme 9 Pro+.