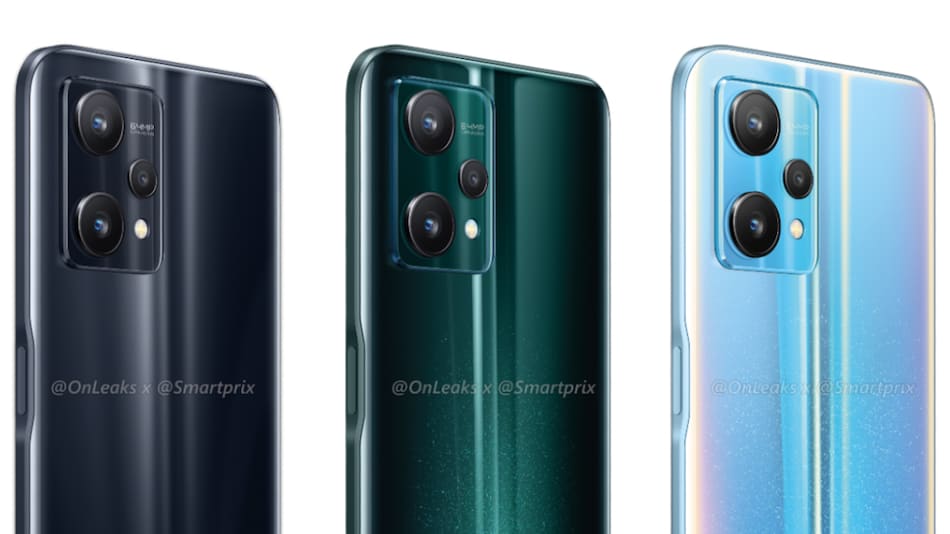 Realme 9 Pro appears to have a hole-punch display design

Realme 9 Pro and Realme 9 Pro+ smartphones are inching towards their launch in India. Ahead of the official debut, the renders of the handsets have surfaced online, suggesting the colour options for the two phones. Realme is said to bring the new smartphones in three distinct colour options, namely Aurora Green, Midnight Black, and Sunrise Blue. Separately, Realme 9 Pro+ 5G handset has appeared on Geekbench, Thailand's National Broadcasting and Telecommunications Commission (NBTC), and FCC websites. The smartphone has been listed with model number RMX3393 and the listing suggests some key specifications of the device.

The Realme 9 series phones are seen to have a hole-punch display design. The renders of the Realme 9 Pro and Realme 9 Pro+ further show triple rear camera units arranged on the upper left corner of the handsets. Realme 9 Pro is seen featuring a 64-megapixel primary sensor, while Realme 9 Pro+ is seen sporting a 50-megapixel sensor with optical image stabilisation (OIS).

The renders show power buttons on the left spine of Realme 9 Pro and Realme 9 Pro+. Volume buttons are seen arranged in the right spine of smartphones.

Separately, the 5G variant of the Realme 9 Pro+ smartphone has been spotted on Geekbench with 818 points in single-core testing. The handset scored 2,324 points in multi-core testing. As per the Geekbench listing, first spotted by MySmartPrice, Realme 9 Pro+ 5G will run on Android 12. It could be powered by an octa-core MediaTek Dimensity 920 processor. The processor is listed to have two performance cores with a maximum clock speed of 2.50GHz and six cores with a maximum clock speed of 2.00GHz. The handset is listed to have 8GB RAM as well.

Realme 9 Pro+ has reportedly bagged certifications from FCC and NBTC as well. As per the listings, the device will have Bluetooth and 5G connectivity along with Wi-Fi support. The listing suggests a 4,400mAh battery with 65W fast charging support as well.

Daler Mehndi to Become First Indian Singer to Perform in Metaverse: All You Need to Know