Realme devices get extended warranty till May 31 May. 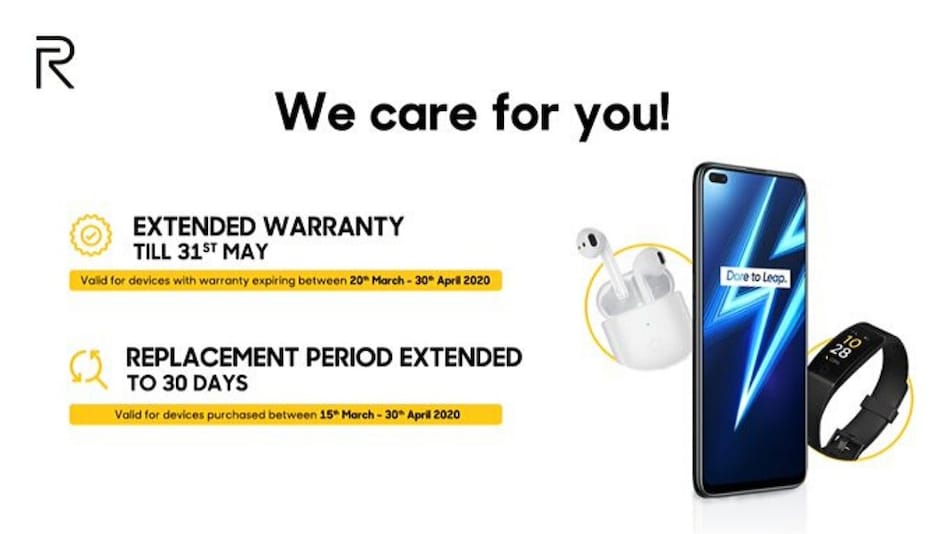 The news was shared by Realme CEO Madhav Sheth on Twitter

Realme on Thursday announced that the company will extend the warranty period on all the products till May 31. The warranty extension is applicable on products including Realme smartphones, wearables and more, whose warranty expires between March 20 to April 20, this year. Realme in its note also said that the company has extended the replacement period to 30 days on devices that were purchased after March 15 to April 30. The company recently announced the suspension of the launch of the upcoming Realme devices due to the lockdown across India till April 14.

The Indian government recently announced a nationwide lockdown for 21 days to curb the spread of Novel Coronavirus in the country. Due to this, miscellaneous services in India came to a halt. Similarly, Realme also declared a temporary shutdown of their manufacturing plants in the country for the "safety of its workforce." The company has suspended the launch of its Realme Narzo-series until further notice.

Realme CEO Madhav Sheth on Thursday also shared the news on his Twitter where he said that the step was taken support Realme users "during this tough period." Sheth via Twitter has repeatedly urged the citizens to stay indoors.

Meanwhile, to check the warranty status of the product, users can visit Realme's official website. For further information, users can either call the Realme helpline numbers or use the chat support option, also available on the website.

In the upcoming months, Realme is also expected to host of products other than smartphones. On Wednesday, Sheth during an AMA session unveiled the upcoming Realme Smartwatch.