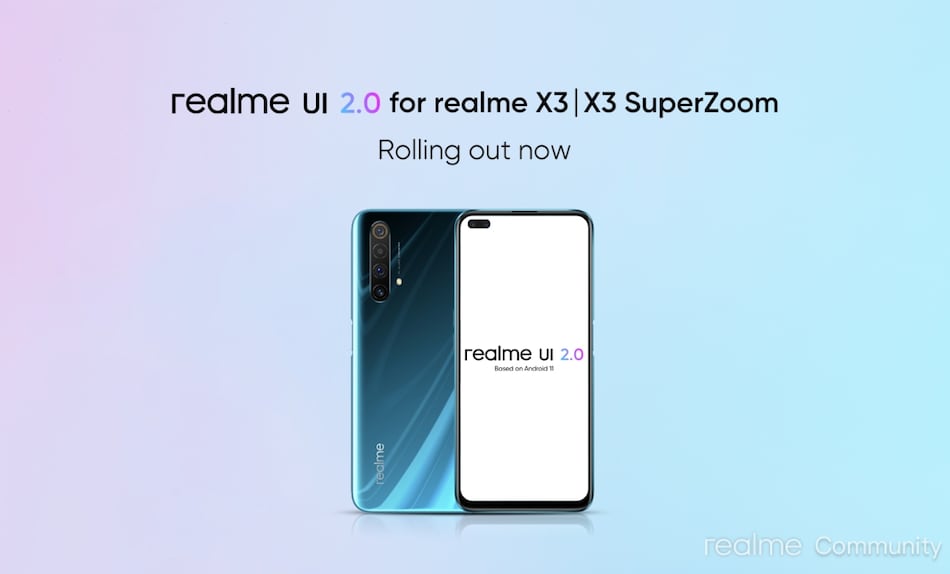 Realme X3 and Realme X3 SuperZoom are receiving stable Android 11-based Realme UI 2.0 update in India. The company announced that it is rolling out in a phased manner and is expected to reach all handsets soon. Along with the latest OS, the update also brings improvements to personalisation settings, high efficiency, system, launcher, security and privacy, camera, photos, games modes, and more. There is no information from Realme regarding the bundled Android security patch or even the size of the update.

The RMX2081PU_11.C.06 update brings Realme UI 2.0, based on Android 11, to Realme X3 and Realme X3 SuperZoom. Realme announced the update through a blog post on Wednesday. The update brings a host of features to the Realme smartphones. The rollout will be conducted in a phased manner to ensure the stability, as per the company. It will reach limited users starting today, May 26, and will eventually be available for other users once all critical bugs are cleared.

Realme will allow personalisation options like creating wallpapers, using third-party app icons, and three dark modes - Enhanced, Medium, and Gentle. Users will be able to drag text, images, and files from one window to another in the split screen mode, along with optimised editing page on the Smart Sidebar.

Users can also customise ringtones using the Tone Tunes feature, set a time period for the Do Not Disturb mode. The update also optimises weather widget, vibration settings, and auto brightness. The update for Realme X3 and Realme X3 SuperZoom allows users to remove or combine folders along with adding filters for apps in the Launcher.

The update also adds a System Cloner tool that lets users create different systems that can be further secured using different fingerprints. App Lock feature can also be quickly turned on or off via Quick Settings. Realme has also improved SOS functions and optimised the permission's manager. Alongside, the update also brings an Immersive mode for games and has changed the way users can summon the gaming assistant.

Wi-Fi hotspot has also become easier to share with others using a QR code. Users of the Realme smartphones can now back up and sync photos to the cloud from their Private Safe folders. Additionally, the photos app also gets an optimised editing feature. Realme has also updated the HeyTap cloud to make it easier to store documents, system settings, WeChat data, and more.

The camera on Realme smartphones has also received improvements in the form of added shortcuts for instantly sharing and editing media, added inertial zoom feature, and the addition of level and grid feature to the video camera. The update also brings Sleep Capsule that schedules downtime for the smartphones. The Sound Amplifier feature lets users amplify faint sounds and soften loud sounds in the background while using earphones.

Lastly, Realme has also warned users that after updating the smartphones, the first reboot may take a long time especially if there are many third-party apps on the phone. Also, the phone may lag and experience slightly higher power consumption while optimising the OS and eliminating potential risks on the smartphones. Realme also suggests users to leave the smartphone idle for 5 hours or use it for 3 days before the smartphone is back to its normal working conditions.