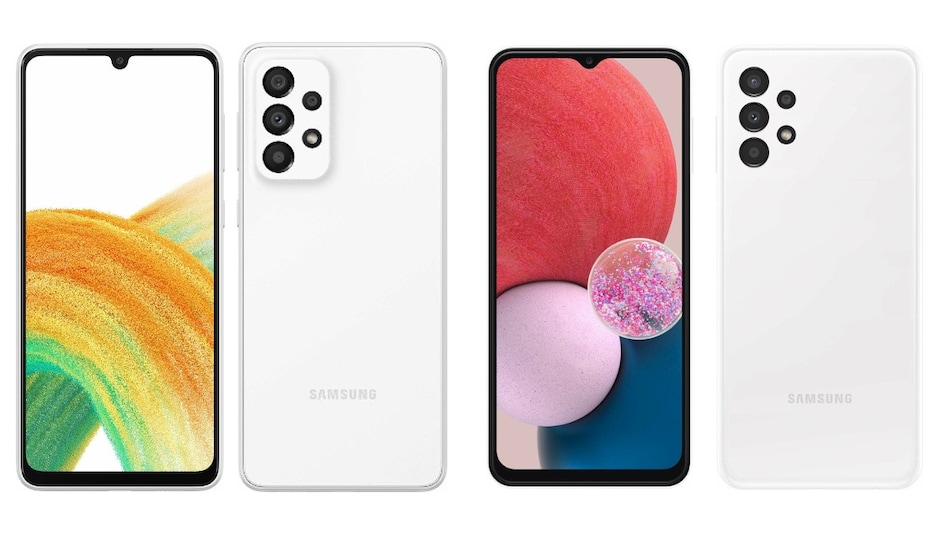 Samsung Galaxy A33 and Galaxy A13 4G renders and specifications have surfaced online once again. As per a new report, the smartphones could share a similar design in terms of their rear camera modules. Both phones are also tipped to pack a 5,000mAh battery. The report also says that Samsung will soon launch Galaxy A33, Galaxy A13 4G, and Galaxy A53 mid-range smartphones. The news comes a day after the 4G version of the Galaxy A13 was reportedly spotted on the NBTC certification site as well as on support pages in India, the UK, Russia, and Switzerland.

A previous development also suggests that Samsung Galaxy A33 5G could come with a 6.4-inch full-HD+ AMOLED display and its quad rear camera setup is said to include a 48-megapixel primary sensor. There is also said to be an 8-megapixel ultra-wide shooter, and a 5-megapixel as well as a 2-megapixel sensor. Another report suggests that Galaxy A33 5G could carry a MediaTek Dimensity 700 SoC, though its recent listing on the Google Play Console indicated Exynos 2100.

It is to be noted that Samsung has already launched the Galaxy A13 5G smartphone in the US, and now its 4G version can be expected soon.

The new WinFuture report suggests that Samsung Galaxy A13 4G will initially only be launched in Europe, and the LTE version will be significantly different from the Galaxy A13 5G in terms of looks and features. The phone is tipped to sport a 6.6-inch PLS LCD full-HD (2408x1080 pixels) display with a 90Hz refresh rate. It could come with an Exynos 850 SoC paired with 4GB of RAM and 64GB storage with the option to expand it via a microSD card.

For photography, the phone is tipped to pack a quad rear camera with a 48-megapixel primary sensor. The other cameras in the setup include a 5-megapixel sensor with an ultra-wide-angle lens and two 2-megapixel shooters for depth and macro shots. These specifications are in line with an earlier report that also claimed the phone will start at a price of EUR 180 (roughly Rs. 15,000). The Samsung Galaxy A13 4G is tipped to get a 5,000mAh battery with support for 15W charging.