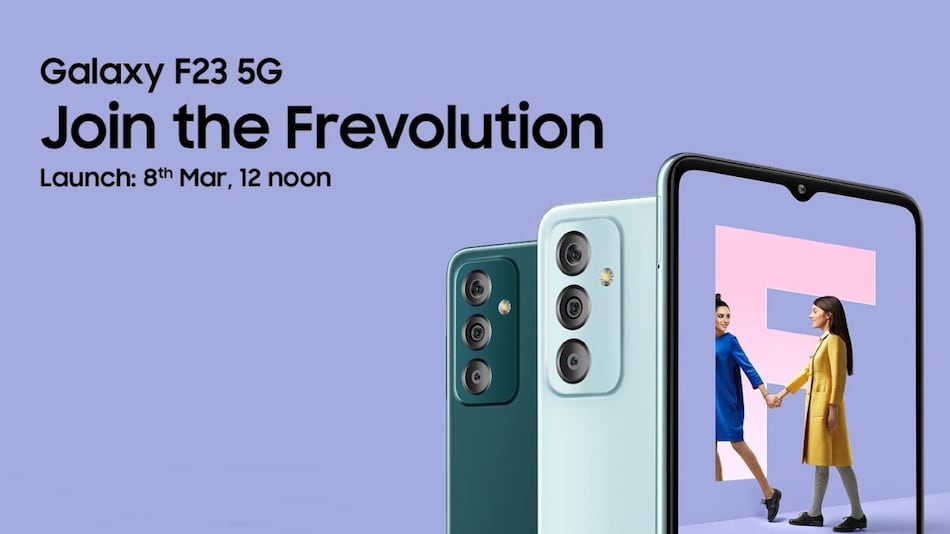 Samsung Galaxy F23 5G India launch is set for today (Tuesday, March 8). The launch will be livestreamed through the company's social media channels. The Samsung Galaxy F23 5G will debut as a successor to the Galaxy F22 that was launched last year. The new Samsung phone will come with features such as a 120Hz display, triple rear cameras, and 25W fast charging support. The smartphone will also be equipped with an octa-core Qualcomm Snapdragon 750G SoC. It will debut in two distinct colour options and carry a matte finish, as per the teasers so far.

The Samsung Galaxy F23 5G launch in India will be livestreamed through the official Samsung India YouTube channel. The launch will begin at 12pm (noon).

You can also watch it live below:

Samsung Galaxy F23 5G price in India is yet to be formally announced. However, a recent report claimed that the phone will debut under the Rs. 20,000-price mark.

Samsung Galaxy F23 5G specifications are yet to be detailed. But nonetheless, Flipkart has created a dedicated microsite that teased some of its key hardware details. The phone will carry the 120Hz full-HD+ display with a Corning Gorilla Glass 5 protection and will be powered by the octa-core Snapdragon 750G SoC. It will feature a triple rear camera setup that will include a 50-megapixel primary sensor as well as an ultra-wide shooter with a 123-degree lens for wide-angle photography, as per the details available on Flipkart.

The rumour mill has also suggested that the Samsung Galaxy F23 5G would include at least 6GB of RAM and run on Android 12 out-of-the-box.