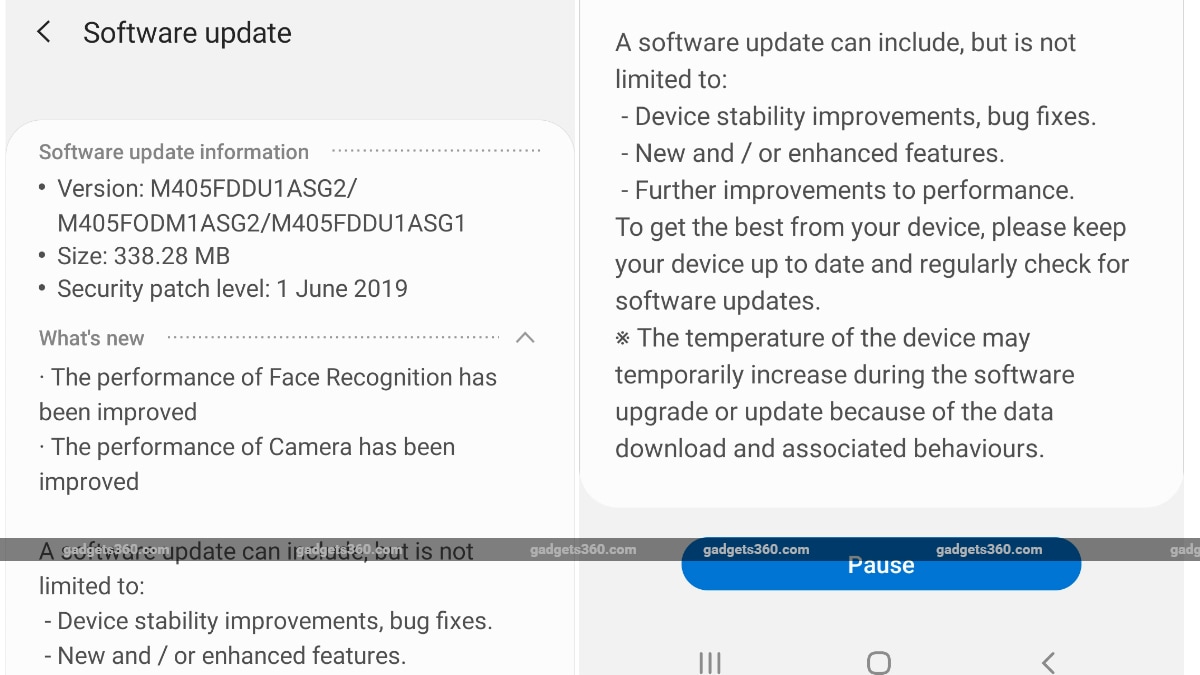 Samsung Galaxy M40 is receiving a new update, and it improves face recognition performance, and brings a better camera as well. The firmware version for this latest update is M405FDDU1ASG2, and it also brings along the June 2019 Android Security Patch. The size of the update is 378.40MB, and it is rolling out to all users gradually. If you haven't received a notification on your Samsung Galaxy M40, you can check manually by going to Settings and seeing if an update has arrived or not.

The Samsung Galaxy M40 update gets a new blue light filter as well with the latest update, reports Sammobile. The changelog states that the update brings the June 2019 security patch, improvements in performance of face recognition, and improvements in performance of the Camera. We recommend you install the update under a good Wi-Fi connection and while the phone is on charge. As mentioned, the rollout is gradual, and we can confirm that it has arrived on our in-house unit already.

The Samsung Galaxy M40 price in India is set at Rs. 19,990 for the lone 6GB RAM + 128GB storage configuration. It is available in Midnight Blue and Seawater Blue gradient colour options.

The dual-SIM (Nano) Samsung Galaxy M40 runs Android 9 Pie with One UI on top and sports a 6.3-inch full-HD+ Infinity-O Display along with a contrast ratio of 1200:1, Corning Gorilla Glass 3 protection, and 480 nits of brightness. The display panel supports the company's screen sound technology that produces audio vibrations. Moreover, the handset is powered by an octa-core Qualcomm Snapdragon 675 SoC, coupled with Adreno 612 GPU and 6GB of RAM.

Samsung has provided 128GB of internal storage on the Galaxy M40 that is expandable via microSD card (up to 512GB). Connectivity options on the phone include 4G VoLTE, Wi-Fi, Bluetooth, GPS/ A-GPS, and a USB Type-C port. Also, there is a fingerprint sensor at the back.

The Galaxy M40 packs a 3,500mAh battery that supports 15W fast charging. Besides, the phone measures 7.9mm of thickness and has 168 grams of weight.

Vivo Z1 Pro, Redmi Note 7 Pro, Samsung Galaxy M40, or Realme 3 Pro: Which is the best phone under Rs. 20,000? We discussed this on Orbital, our weekly technology podcast, which you can subscribe to via Apple Podcasts or RSS, download the episode, or just hit the play button below.

Amazon Prime Subscription Available at Half Price to 18- to 24-Year-Olds in India: All You Need to Know
Stranger Things Season 4 to ‘Open Up Outside of Hawkins’: The Duffer Brothers