Samsung Galaxy M40 will reportedly receive the Core version of One UI 2.0. 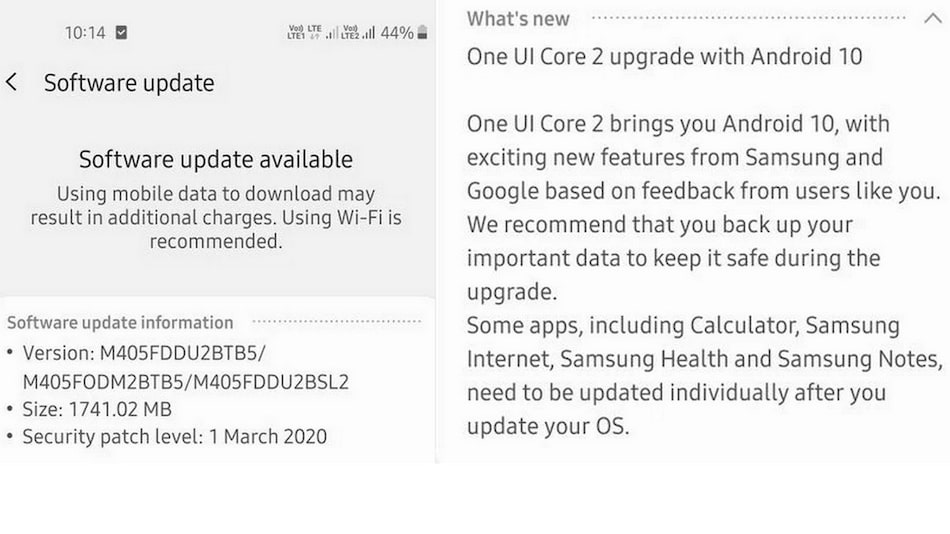 Samsung has reportedly released Android 10-based One UI 2.0 update for its Galaxy M40 smartphone. It comes with the software version M405FDDU2BTB5 that also brings the latest March 2020 security patch. Like the Galaxy M20 and Galaxy M30, the Galaxy M40 will get a “Core” version of the update that is not the full-fledged version of One UI 2.0. This means, the phone will have all the very basic features of Android 10 but will miss out on some extras.

The update for the Galaxy M40 is 1.74GB in size and comes with security patch dated March 1. While the update doesn't list a complete changelog, Sammobile states the phone will get the regular Android 10 updates that includes a better dark mode, smart replies, improved privacy and location controls, option to switch between Samsung and Google navigation gestures, along with other changes. Being a Core update, it will not have features like the built-in screen recorder.

The pre-loaded apps like Calculator, Samsung Internet, Samsung Health, and Samsung Notes have also been updated but users will need to individually update them after the OS update is done. If you want to check whether you have received the update, go to Settings > Software update. If the update is present, tap on Download and install.

Samsung Galaxy M40 is powered by the Qualcomm Snapdragon 675 SoC and comes with 6GB RAM and 128GB storage. It has a 6.3-inch Infinity-O Display, a triple camera setup on the back, and a 16-megapixel front camera. The dual-SIM phone has a USB Type-C port and supports for Bluetooth v5.0. The Galaxy M40 is available in two colours, Seawater Blue and Midnight Blue. It is priced at Rs. 17,990.